Art and the Egyptian Women - Mose Bianchi's Cleopatra, with footnotes 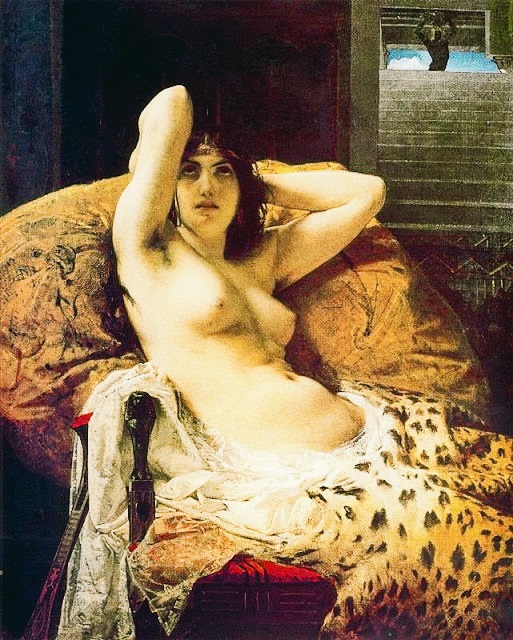 Mose Bianchi (1840-1904)
Cleopatra
Oil on canvas
Villa Reale di Milano
Cleopatra VII Philopator (69 – August 12, 30 BC), was the last active pharaoh of Ptolemaic Egypt, briefly survived as pharaoh by her son Caesarion. After her reign, Egypt became a province of the recently established Roman Empire.
Cleopatra was a member of the Ptolemaic dynasty, a family of Macedonian Greek origin that ruled Egypt after Alexander the Great's death. The Ptolemies spoke Greek throughout their dynasty, and refused to speak Egyptian, which is the reason that Greek as well as Egyptian languages were used on official court documents such as the Rosetta Stone. By contrast, Cleopatra did learn to speak Egyptian and represented herself as the reincarnation of the Egyptian goddess Isis.
Cleopatra originally ruled jointly with her father Ptolemy XII Auletes, and later with her brothers Ptolemy XIII and Ptolemy XIV, whom she married as per Egyptian custom, but eventually she became sole ruler. As pharaoh, she consummated a liaison with Julius Caesar that solidified her grip on the throne.
After Caesar's assassination in 44 BC, she aligned with Mark Antony in opposition to Caesar's legal heir Gaius Julius Caesar Octavianus (later known as Augustus). With Antony, she bore the twins Cleopatra Selene II and Alexander Helio. Antony committed suicide after losing the Battle of Actium to Octavian's forces, and Cleopatra followed suit. According to tradition, she killed herself by means of an asp bite on August 12, 30 BC. More Cleopatra
Mosè Bianchi (Monza, 1840–1904) was an Italian painter and printmaker. The award of a grant in 1867 enabled him to visit Venice and then Paris in 1869. He took part with some success at the Brera exhibitions and the Vienna Exhibition of 1873. It was in this period that he began to paint genre scenes in 18th-century settings and numerous portraits, soon becoming one of the artists most in demand with the Milanese middle classes. More on Mosè Bianchi