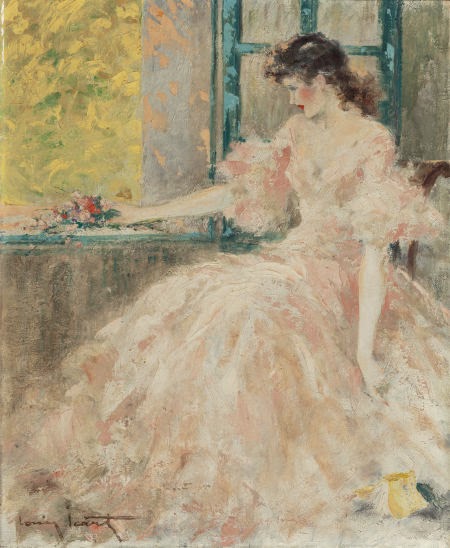 Louis Justin Laurent Icart was born in the culturally rich Toulouse, France in 1888. Educated to follow in his father’s footsteps as a banker, Icart rebelled with a love of Victor Hugo, theater, and the arts. Icart moved to Paris in 1907 where he painted, sketched, and etched his way into art history. He began by producing erotic postcards for tourists, followed shortly by designing covers for La Critique Theatrale, and in 1913, exhibiting at Salon Des Humoristes. In 1914, Icart married his lifetime muse, Fanny Volmers. Combining his love of beautiful women, understanding of fashion, and talent with etching, Icart became the premier Art Deco artist. Icart’s art often depicted the sensuous, glamourous, and even erotic Parisian woman with a tinge of humor. Drafted in World War I, Icart was removed from his luxurious lifestyle in Paris and served as a pilot. He would sketch continuously throughout the war, producing several patriotic pieces and publishing several wartime sketches in later years. During the 1920s, Icart worked as an illustrator for various publications in fashion and design capturing the romance of Les Annees Folles, which solidified his artistic and financial success. He exhibited his paintings at the Galerie Simonson in Paris with mixed reviews. Unlike his etchings that are commercial in nature, Icart’s paintings are his personal interpretation of his world. His style was unique but gave homage to the eighteenth century French masters such as Jean Antoine Watteau and Jean Honore Fragonard as well as impressionists Degas and Monet. During this time, Icart began to exhibit in New York City with various results. In 1932, the Louis Icart Society created “Les Visions Blanches” collection for the Metropolitan Galleries in New York but gained little traction. After the German invasion in 1940, Icart began to paint the horrors of occupation and his eventual exodus. Louis Icart would later return to France to live in a beautiful house in Montmartre overlooking Paris. More on Louis Icart