7 Works by Oriental Artists you should know about 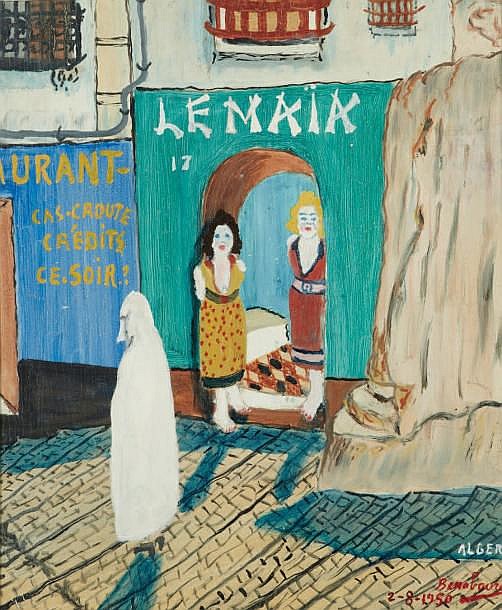 Hacène Benaboura (Algiers , 10 November 1898 - Algiers 23 April 1960) is one of the first Algerian painters. His work is often closer to the naive art.

Born in Belcourt, Hacène Benaboura is introduced by Jean Brua in 1957 in the "Algiers-Journal" as "the last survivor of the line of Aboura" Turkish princes, and privateers brothers of Barbarossa . His father, a horse dealer, owns several buildings in the Casbah . After a short schooling Hacène Benaboura entered the match factory in Hamma. He joined the war from 1914 to 1918, then became an auto body painter.

Drawing since childhood Hacène Benaboura is then attracted to painting, his walks in the test garden with him to discover the painters Maxime Noire and José Ortega at work. He turns by himself to painting around 1927 and devoted himself from 1944, its themes being the views of the port and the districts of Algiers, Belcourt, the Casbah, Le Ruisseau. The same year he participated in a collective presentation and in 1946, Famin René organized his first solo exhibition at the Gallery of the Minaret.

In 1955 Benaboura Aletti gets first place at the Grand Art Award of Algeria, and again in 1957. In 1958 Edmond Charlot introduces him to the Comte-Tinchant gallery. His friends organize a celebratory meal that included painters Mondzain , Galliéro , Bénisti , René Sintes , Albagnac , Gisèle Mianes , John Brown , Assus and Edmond Charlot.

Hacène Benaboura waork is seen 1963 at the exhibition of "Algerian Painters", then in 1964 to the one presented in Paris at the Museum of Decorative Arts. 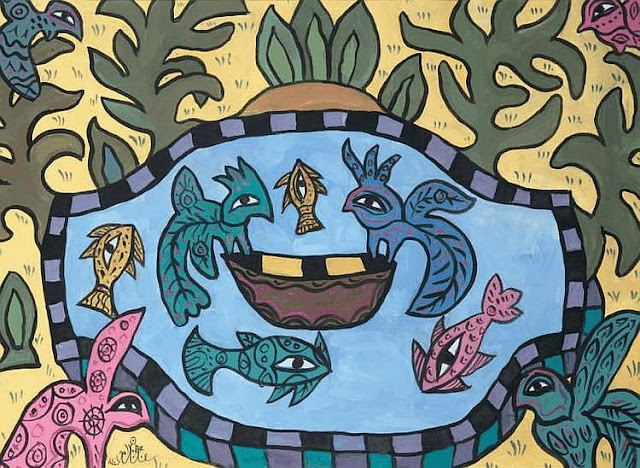 Fatmah Baya, whose real name was Fatma Haddad was born 12 December 1931 In Bordj el Kiffan (Fort-de-l'Eau, near Algiers ) and the died 9 November 1998 in Blida , was an Algerian painter.

Having lost both parents, her grandmother her get work on a horticulture farm. In 1943, Marguerite Caminat, sister of the owner, takes her home, in Algiers, to work as a domestic. The house whose full of flowers and birds.

Baya begins to shape characters and clay animals, and is encouraged to make gouaches that the sculptor Jean Peyrissac shows Aimé Maeght , who was in Algiers in 1943. In 1947, an exhibition is organized for her in Paris by Maeght at his gallery. TYhe show is a great success. "Vogue" magazine published the photo of Baya, who was then only sixteen, with an article by Edmonde Charles-Roux . Baya discovers Paris and meets the painter Georges Braque . in 1949 she makes her sculptures at Vallauris in the workshop Madura and alongside Picasso .

In 1953, Baya is "surrender" to her tutor, who marries her as a second wife, the musician " Arab-Andalusian" El Hadj Mahfoud Mahieddine, thirty years older than her. Baya remains for ten years unable to continue her work. In 1963 she participated in the exhibition "Algerian Painters". the exhibition is prefaced by Jean Senac. The Museum of Algiers acquires and exhibits her works of old. On the friendly encouragement of curators of the Museum, she took her brushes and never cease to perform great works on paper which will later be exhibited regularly in Algeria (Algiers, Tizi Ouzou , Annaba ) in France (Paris and Marseille ), Belgium ( Brussels ) and in the Arab world. Several of them are kept in the Collection of Art Brut in Lausanne .

Baya is placed with Aksouh , Benanteur , Guermaz , Issiakhem , Khadda and Mesli among the artists of the "1930 generation" (all these painters were born around this year) which, after the precursors of 1920 , were the founder of the modern Algerian art. 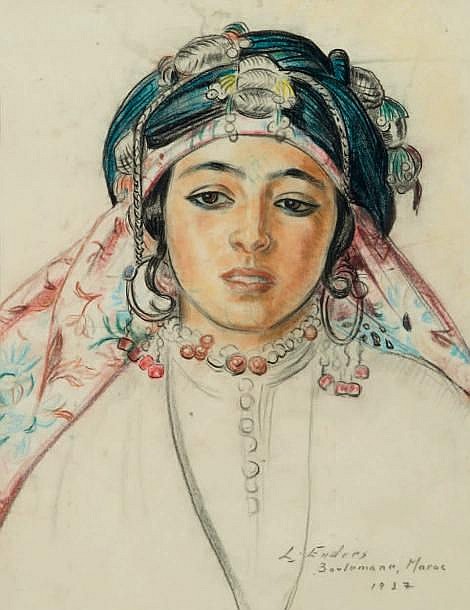 Louis John Endres, (1896-1989) was a talented American visual artist of the nineteenth century. He emigrated to Britain and spent a great deal of time in Morocco where he drew many Orientalist sketches and artwork. This particular drawing depicts the Moroccan tea-ritual which is widespread in Morocco and still in use in Morocco ever since the Gunpowder tealeaves from China where introduced there in the mid 1600's. 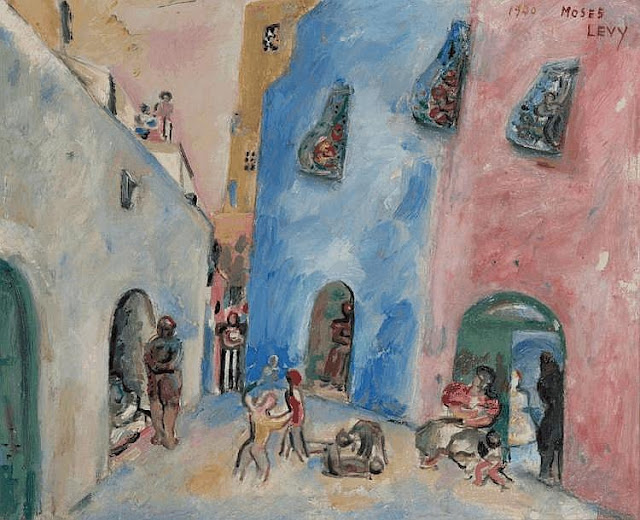 Moses Levy (موزس ليفي), born 3 February 1885 in Tunis and died on 2 April 1968 in Viareggio, is a painter and writer, native Tunisian. He was one of the pioneers of the genre in Tunisia and one of the current precursor of the School of Tunis.

In 1900 , when he was fifteen, he attended the Art Institute of Lucca. Three years later he studied at the Academy of Fine Arts in Florence with such teachers as Lorenzo Fattori. During this period he befriended Lorenzo Viani, Virgilio Antonio Carlini or Antony Witt.

In 1907, he  was accepted at the Seventh Venice Biennale with seven etchings, for which he received a prize with a work entitled "The raccolta delle Olive". In 1911 he exhibited at the Chamber of Commerce of Tunis, and in Rome in 1913, on the occasion of the International Exhibition of Art, with six etchings. In 1914 he exhibited for the second time in Seccione della exhibition in Rome, where he won first prize for his engraving "Contadino Toscano". These etchings were quickly noticed; and it was at this period that he began to practice woodcut and monotype

After World War II , he founded the School of Tunis with his friends Pierre Boucherle , Jules Lellouche and Antonio Corpora. His studio in the Rue de Provence, the current street of 18-January in Tunis, becomes a privileged place of encounter of its members. He took frequent trips between the two shores of the Mediterranean Sea that served as an inspiration for his art. 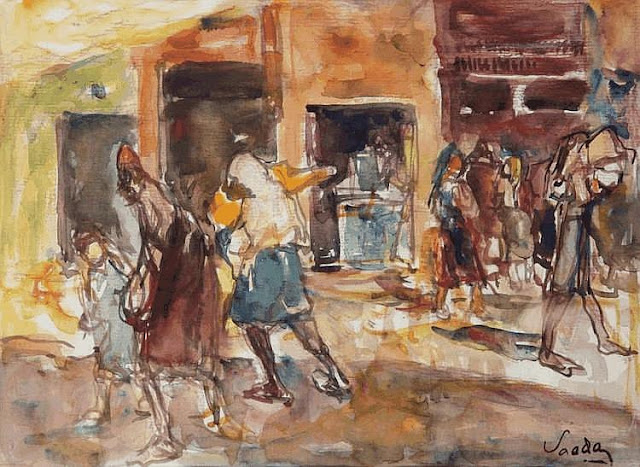 
A STREET AT TUNIS
Watercolour on paper with white highlights,
signed "Saada"

In 1938 , he was appointed professor at the School of Fine Arts of Tunis. He interrupted his career during the Second World War, then resumed his work from 1945 to 1961.

Henri Saada exhibited in all of Tunis paintings shows. He also participates as a jury member and as deputy commissioner general.

In 1961 , Henri Saada moved to Paris were he also participated in numerous exhibitions in France. He died March 19, 1976 in Paris. 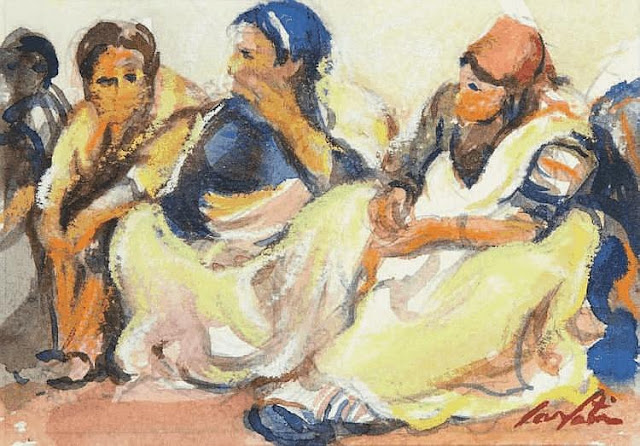 Victor Sarfati, (1931 - 2015), was a Tunisian painter and professor of Art. He studied at the School of Fine Arts in Tunis and Sadiki College. He helped develop the art style of the School of Tunis, with such  pioneers as Yahia Turki , Moses Levy , Pierre Boucherle , Abdelaziz Gorgi and Ammar Farhat.

Popular neighborhoods were a favorite subject for him and an inexhaustible source of inspiration; the souk , the alleys of Bab Saadoun, Zarkoun, Hara, the thrift, the jewish synagogue , Sidi Bou Said and Carthage. The search for beauty is also present in his works. 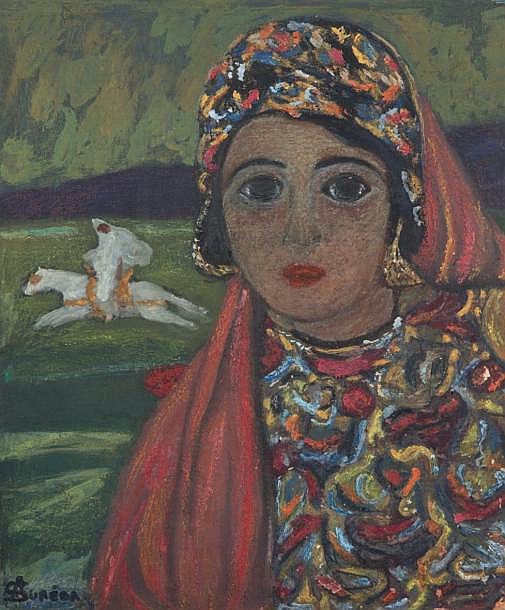 André Suréda, born 5 June 1872 at Versailles , died 7 January 1930 at Versailles , is a designer , writer , illustrator and painter French Orientalist. From a Spanish noble family (his great-grandparents Don Bartolomé Suréda Miserol there and his wife Teresa were painted by Goya in 1805), he was educated at the Lycee Henri IV , then at the École nationale supérieure des Beaux-Arts. By 1910, he was dedicated solely to Orientalism.

From 1902 to 1925 he exhibited regularly at the National Society of Fine Arts colonial exhibitions. He often traveled in North Africa where he met Georges Hilbert . He was present at the New York International Exhibition in 1927. In 1929, he illustrated books for Jean Tharaud and Jerome Tharaud "Next year in Jerusalem" and "The sun on Guy de Maupassant" .

Some of his works are the in possession at Musée Lambinet Versailles, the Rolin Museum of Autun , at Ahmed Zabana Museum of Oran , the BNF in Paris . He is considered a realisti,c and and an orientalist. He had rare opportunity to paint the privacy of women and religious communities in North Africa Levant and Palestine.