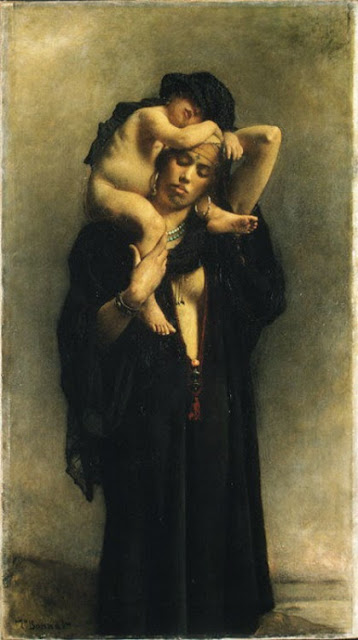 Bonnat is said to have studied this peasant woman and child from life while he was in Egypt for the opening ceremony of the Suez Canal in 1869. The painting was praised at the Paris Salon the following year and again when it was first exhibited in New York in 1876. When Catharine Lorillard Wolfe bequeathed the picture to the Metropolitan it was deemed "a true and vital portrait of two clearly realized individuals [with] a wonderful dignity, sobriety, strength, and beauty."
There is a full-length oil study for this painting in the Musée Bonnat, Bayonne. More on this painting
Léon Joseph Florentin Bonnat (20 June 1833 – 8 September 1922) was a French painter. He won a medal of honor in Paris in 1869, going on to become one of the leading artists of his day. Bonnat went on to win the Grand Officer of the Légion d'honneur and became a professor at the Ecole des Beaux Arts in 1882. In May 1905 he succeeded Paul Dubois as director of the Ecole des Beaux-Arts. Julius Kaplan characterised Bonnat as "a liberal teacher who stressed simplicity in art above high academic finish, as well as overall effect rather than detail." Bonnat's emphasis on overall effect on the one hand, and rigorous drawing on the other, put him in a middle position with respect to the Impressionists and academic painters like his friend Jean-Léon Gérôme. In 1917, Bonnat was elected into the National Academy of Design as an Honorary Corresponding member. More on Léon Joseph Florentin Bonnat