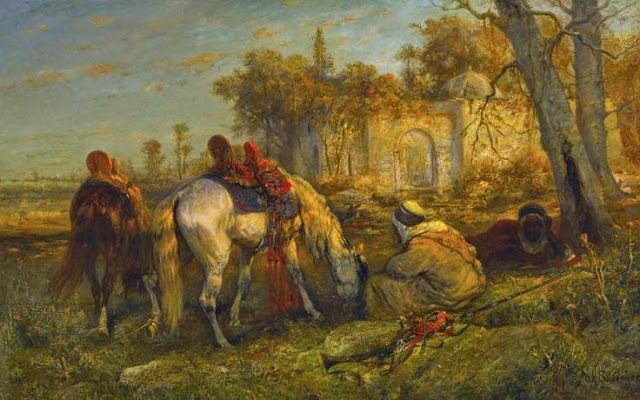 Schreyer’s loose, bold brush and warm palette of earthy tones effectively creates a feeling of place enhanced by his own experience on the field. More on this painting

Adolf Schreyer (July 9, 1828 Frankfurt-am-Main – July 29, 1899 Kronberg im Taunus) was a German painter, associated with the Düsseldorf school of painting. He studied art, first at the Städel Institute in his native town, and then at Stuttgart and Munich. He painted many of his favourite subjects in his travels in the East. He first accompanied Maximilian Karl, 6th Prince of Thurn and Taxis through Hungary, Wallachia, Russia and Turkey; then, in 1854, he followed the Austrian army across the Wallachian frontier. In 1856 he went to Egypt and Syria, and in 1861 to Algiers. In 1862 he settled in Paris, but returned to Germany in 1870; and settled at Cronberg near Frankfurt, where he died.

Schreyer was, and is still, especially esteemed as a painter of horses, of peasant life in Wallachia and Moldavia, and of battle incidents. His work is remarkable for its excellent equine draughtsmanship, and for the artist's power of observation and forceful statement; and has found particular favour among French and American collectors. Of his battle-pictures there are two at the Schwerin Gallery, and others in the collection of Count Mensdorff-Pouilly and in the Raven Gallery, Berlin.  More on Adolf Schreyer