The Virgin and the Child - Religious Art - Paintings from the Bible 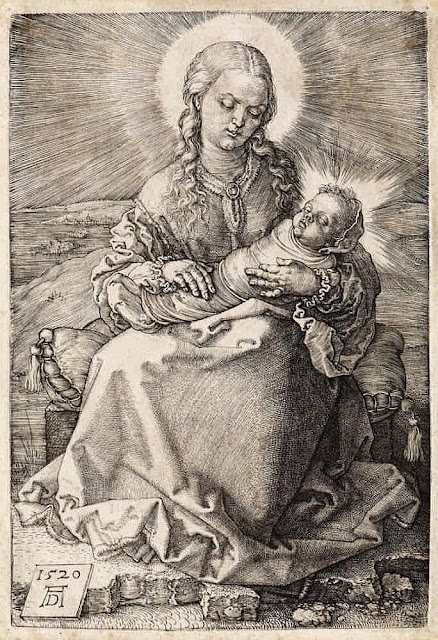 Mary is sitting in a broad landscape, holding the sleeping and swaddled Child in her arms. Her head is crowned by a nimbus and over her sober undergarment with puffy, almost mannered sleeves, she wears a heavy, fur-lined dress which shows at the lower seam. The simple fur collar is held together by a brooch. The Blessed Mother is sitting on a cushion, which is lying on a simple stone cuboid. The sleeping Christ Child is swaddeled from head to toe and by the means of the cross nimbus his later destiny of being the saviour of mankind is already announced. Mary's serious facial expression can be understood in the same way. The motif of the Blessed Mother worrying about her sleeping Child comes from Italy, where it was depicted repeatedly by Bellini.


The landscape in the background is not depicted in much detail, nevertheless it is certainly a riverside with tiny townscapes. A small stone plate, carrying Albrecht Dürer's initials as well as the year 1520, is leaning on the stone step in the left foreground. More

Email ThisBlogThis!Share to TwitterShare to FacebookShare to Pinterest
Labels: Paintings from the Bible, Religious Art, The Virgin and the Child