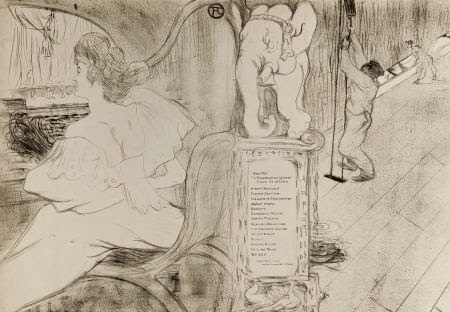 Henri Marie Raymond de Toulouse-Lautrec-Monfa (24 November 1864 – 9 September 1901), also known as Henri de Toulouse-Lautrec was a French painter, printmaker, draughtsman and illustrator whose immersion in the colourful and theatrical life of Paris in the late 19th century allowed him to produce a collection of enticing, elegant and provocative images of the modern, sometimes decadent, life of those times. Toulouse-Lautrec is among the best-known painters of the Post-Impressionist period, alongside Cézanne, Van Gogh and Gauguin. In a 2005 auction at Christie's auction house, La Blanchisseuse, his early painting of a young laundress, sold for US$22.4 million and set a new record for the artist for a price at auction. More on Henri de Toulouse-Lautrec 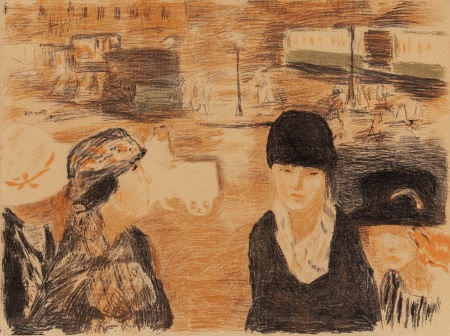 PIERRE BONNARD (French, 1867-1947)Place Clichy , 1922
Lithograph in colors
18-1/2 x 25 inches (47.0 x 63.5 cm) (sight)
From the edition of 100
Signed center left: Bonnard
Signed, dated, and inscribed along lower margin: 22/ Bonnard Paris S...
Published by Bernheim-Jeune, Paris
Private collection
Pierre Bonnard (3 October 1867 — 23 January 1947) was a French painter and printmaker, as well as a founding member of the Post-Impressionist group of avant-garde painters Les Nabis. Bonnard preferred to work from memory, using drawings as a reference, and his paintings are often characterized by a dreamlike quality. The intimate domestic scenes, for which he is perhaps best known, often include his wife Marthe de Meligny.

Bonnard has been described as "the most thoroughly idiosyncratic of all the great twentieth- century painters", and the unusual vantage points of his compositions rely less on traditional modes of pictorial structure than voluptuous color, poetic allusions and visual wit. Identified as a late practitioner of Impressionism in the early 20th century, Bonnard has since been recognized for his unique use of color and his complex imagery. More on Pierre Bonnard