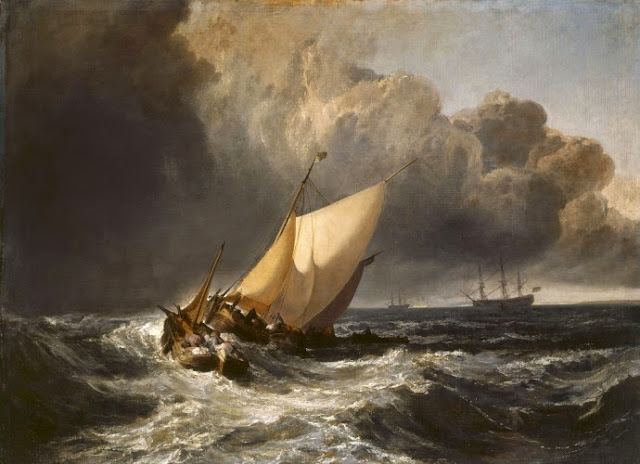 Joseph Mallord William Turner
Dutch Boats in a Gale, c. 1801
Oil on canvas
162.5 × 221 cm
National Gallery
Dutch boats are shown on course for collision in stormy weather. Dark clouds contribute to the sense of danger. The painting was commissioned by the 3rd Duke of Bridgewater as a companion piece to a 17th-century Dutch seascape in his possession. More on this painting
Joseph Mallord William  Turner, RA (1775 – 19 December 1851) was an English Romanticist landscape painter, water-colourist, and printmaker. Turner was considered a controversial figure in his day, but is now regarded as the artist who elevated landscape painting to an eminence rivalling history painting.

Although renowned for his oil paintings, Turner is also one of the greatest masters of British watercolour landscape painting. He is commonly known as "the painter of light" and his work is regarded as a Romantic preface to Impressionism, and some of his works are cited as examples of abstract art prior to its recognition in the early 20th century. More on Joseph Mallord William Turner 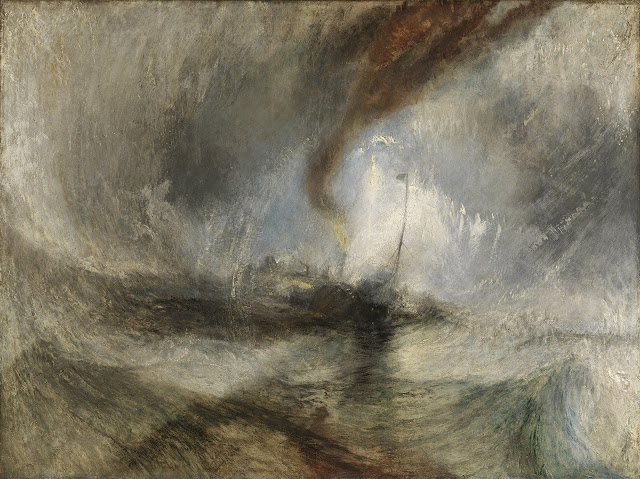 Joseph Mallord William Turner 1775–1851
Snow Storm - Steam-Boat off a Harbour’s Mouth
Oil paint on canvas
914 × 1219 mm
1233 × 1535 × 145 mm
Tate
Extraordinarily inventive and enduringly influential, J. M. W. Turner produced many of his most important and famous pictures after the age of sixty, in the last fifteen years of his life. Demonstrating ongoing radicalism of technique and ever-original subject matter, these works show Turner constantly challenging his contemporaries while remaining keenly aware of the market for his art. More on this painting
Turner painted many pictures exploring the extreme weather at sea. Here, the steam-boat is shown at the centre of a storm. There is a story that Turner was tied to the mast of a ship during a storm so he could paint the event from memory. This is now thought to be untrue, but it has been used as an example of Turner’s direct engagement with the world around him.
The small ship, being overpowered by water and wind, can be seen as a symbol of human's efforts to overcome the forces of nature. More on this painting 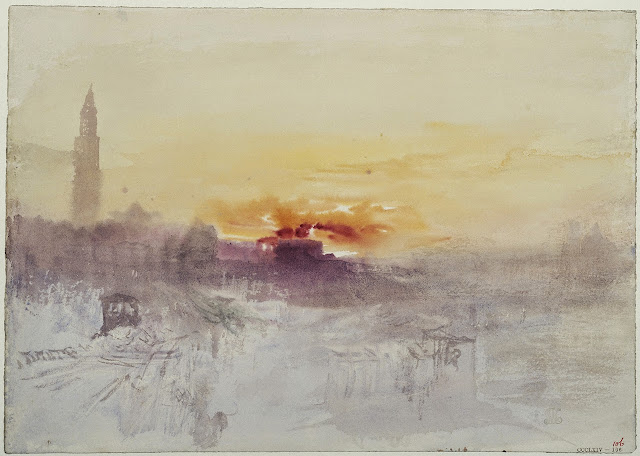 Joseph Mallord William Turner 1775–1851
Venice at Sunrise from the Hotel Europa, with Campanile of San Marco,c. 1840
Watercolor on paper
7 4/5 × 11 in, 19.8 × 28 cm
J. Paul Getty Museum, Los Angeles
His canvases are a rough topography of thick impasto, sometimes smeared on with a palette knife. His watercolors, conversely, seem barely touched, as faint as afterimages and as immaterial as memories. Turner’s highly personal use of color extends across media. More on this painting
J.M.W. Turner’s dramatic, roiling seascapes united a Romantic appreciation for nature and architecture with references to literature, mythology, and history. His detailed depictions of bustling seaports, ships in storm-tossed seas, and other atmospheric scenes often bordered on abstraction with their loose, raw brushstrokes and appreciation of movement. More on this painting 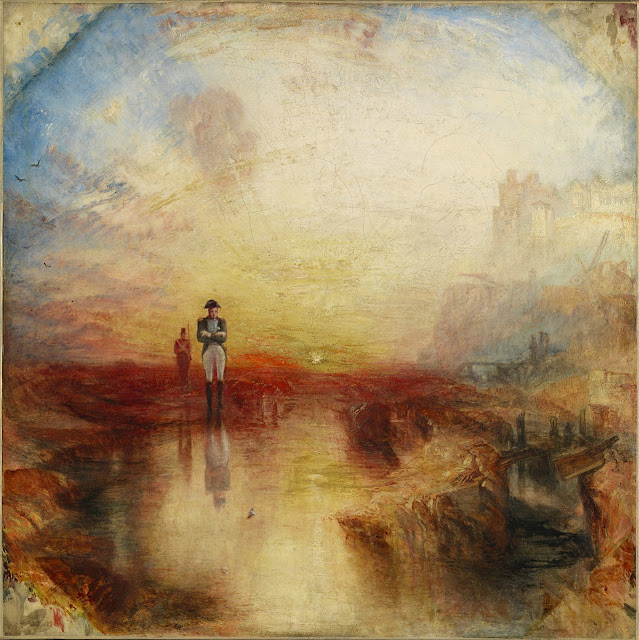 This scene shows French military leader Napoleon in exile on the island of St Helena. He had been sent there after being defeated by a British-led army in 1815 at the Battle of Waterloo. Napoleon died in St Helena in 1821. This work was painted in the year his ashes were returned to France. The image does not appear to celebrate or condemn Napoleon, but instead suggests the pointlessness of war. The isolated uniformed body appears out of place in its surroundings. The red background invokes the trauma of battle. In verses attached to the canvas, Turner refers to the sunset as a ‘sea of blood’. More on this painting 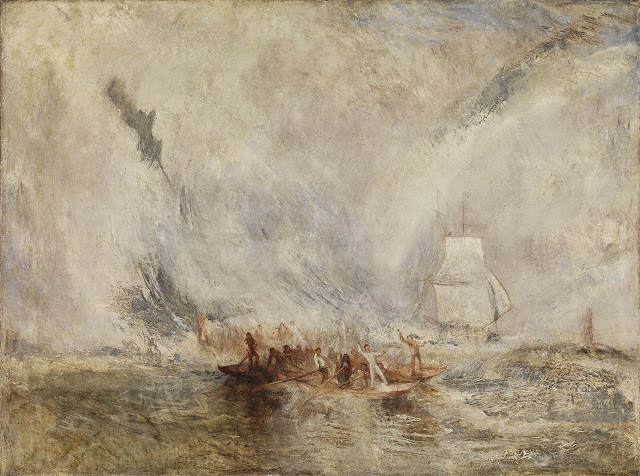 Joseph Mallord William Turner 1775–1851
Whalers
Oil paint on canvas
911 × 1219 mm
Tate
This is the first of two whaling subjects Turner exhibited at the Royal Academy in 1845 (followed by two more in 1846), probably painted in the hope of selling them to his patron Elhanan Bicknell, an investor in the whaling industry.
The four pictures were inspired by Thomas Beale’s Natural History of the Sperm Whale (1839), with this painting based on an account of the pursuit of a whale in the North Pacific. At the right the creature has been harpooned and is bleeding, while men in three boats stand with their arms raised to strike again. More on this painting