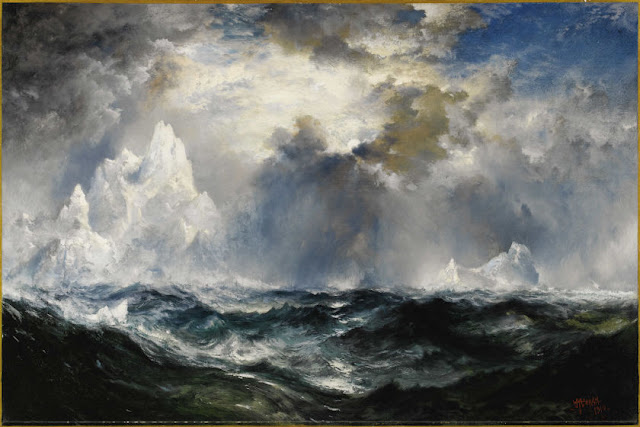 In late April of 1890, on his second trip to Venice, Moran's ship was en route to Antwerp when it passed an iceberg. He made a rapid pencil sketch recording the contour of the ice formation as well as its specific longitude and latitude. Details he couldn't sketch quickly enough, he described verbally: "water pouring over the sides of berg. . . Deep Blue water with great rollers capped with foam." Moran painted several canvases depicting icebergs over the course of the next two decades, including the present work.

In Moonlight. Icebergs in Mid Atlantic, produced twenty years after the artist's firsthand citing of icebergs. Moran designed Moonlight. Icebergs in Mid Atlantic as a lozenge of illuminated activity with all four corners falling into darkness. The painter forces the viewer into the central zone where a riot of clouds, waves, jutting mountains of floating ice, and water lose their discreteness. Ice resembles cloud formations and vice versa. The foamy head of a wave sometimes looks sharp enough to be ice instead. By confusing the distinctions, Moran artfully captured the heady confusion of being on a choppy sea, where there are no landmarks, a brewing storm, and glimpses of treacherous icebergs behind screens of rain. In this way, the present painting is a stunning combination of the highly romanticized view of the power of nature, and the naturalism of an actual ocean voyage. More

Thomas Moran (February 12, 1837 – August 25, 1926) from Bolton, England was an American painter and printmaker of the Hudson River School in New York whose work often featured the Rocky Mountains. Moran and his family took residence in New York where he obtained work as an artist. He was a younger brother of the noted marine artist Edward Moran, with whom he shared a studio. A talented illustrator and exquisite colorist, Thomas Moran was hired as an illustrator at Scribner's Monthly. During the late 1860s, he was appointed the chief illustrator for the magazine, a position that helped him launch his career as one of the premier painters of the American landscape. More