Richard Redgrave, R.A. “The Outcast” (1851)
In an age when sexual innocence was highly valued and sex life for a respectable woman was deemed appropriate only within marriage, the loss of chastity for an unwed woman had multiple repercussions. The figure of the ‘fallen’ woman has been mythologised through contemporary art, journalism and literature as Victorian moralists warned against the consequences of losing one’s virtue. The Foundling Museum. EXHIBITIONS & DISPLAYS; 25 Sep 2015 — 03 Jan 2016 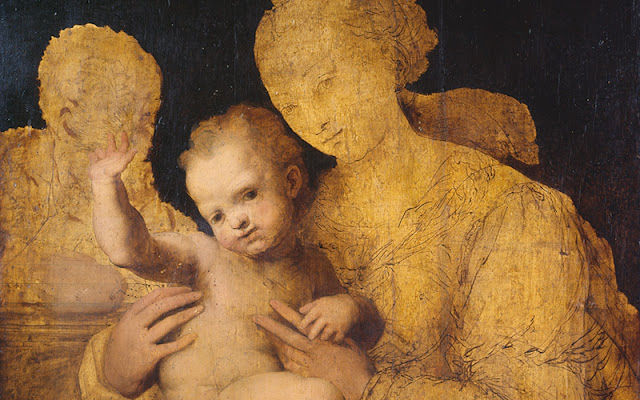 The answer, as a new exhibition at London’s Courtauld Gallery demonstrates, is not always straightforward. Here, curator Dr Karen Serres talks to Lavender Au about the show and 'incomplete' works by del Vaga, Rembrandt, Monet, Cézanne and more 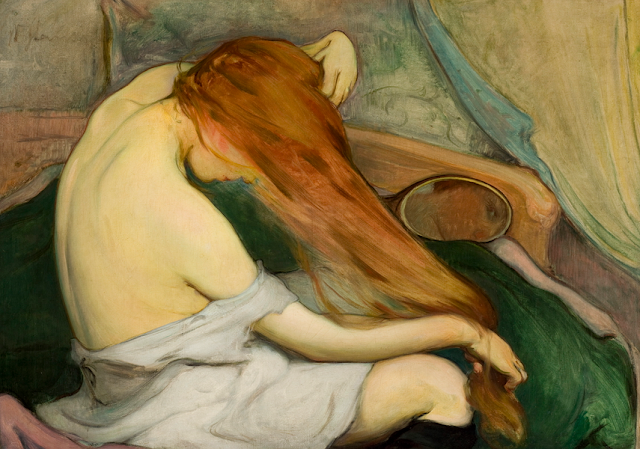 An exhibition at Paris's Musée Marmottan Monet invites you into the bathrooms of the beauties of yesteryear, thanks to the voyeuristic brushstrokes of greats like Claude Monet, Henri de Toulouse-Lautrec,Pierre Bonnard, and Berthe Morisot. More 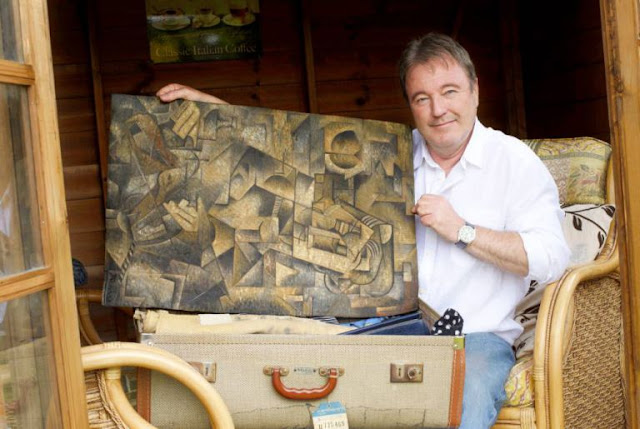 A valuable Picasso stashed away for 55 years, an illegitimate baby and a love affair between a Russian soldier and a Scottish teenager during the height of the cold war.
It sounds like something out of a spy novel or a Hollywood film.
But it’s actually the secret past discovered by Dominic Currie, from Methil near Kirkcaldy in Fife, while cleaning out his attic. More 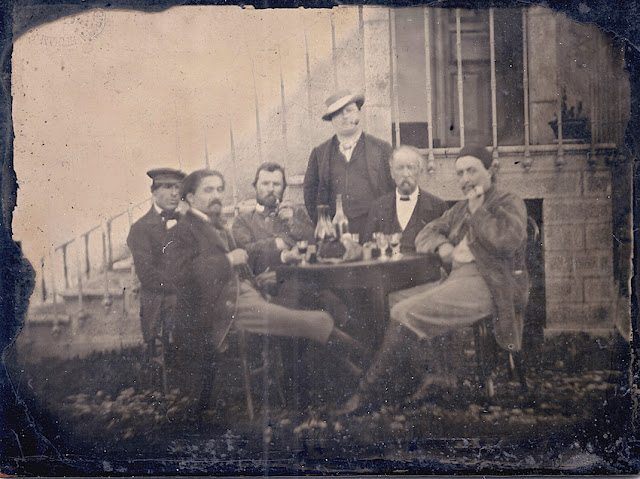 Newly Discovered Photo from 1887 showing Emile Bernard (second from the left), Vincent van Gogh (third from the left), André Antoine (standing at center), and Paul Gauguin (far right), and Other Drunk Artists, in a group photo (via the Romantic Agony auctions) More 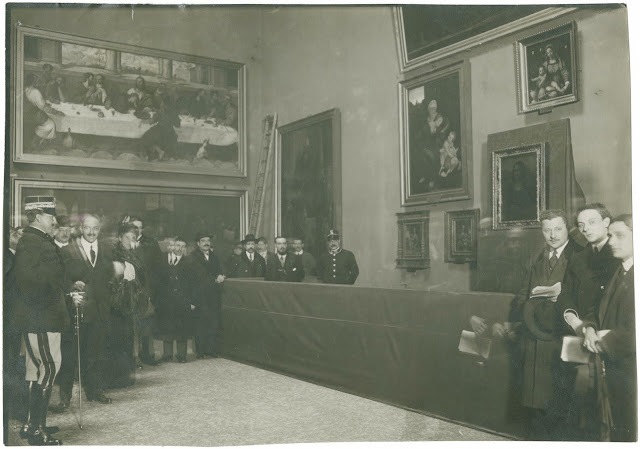 [LEONARDO DA VINCI] AND VARIOUS PHOTOREPORTERS - Documenting the Theft and the Return of Mona Lisa, Florence-Paris, 1913 intage silver print, about 130x180 mm. The painting's fame increased greatly when it was stolen on 21 August 1911. The next day, Louis Béroud, a painter, walked into the Louvre and went to the Salon Carré where the Mona Lisa had been on display for five years, he found four iron pegs.... The Louvre was closed for an entire week to aid in investigation of the theft. The French poet Guillaume Apollinaire as well as Pablo Picasso came under suspicion ... but were later released. It was Vincenzo Peruggia, a Louvre employee, who had stolen the psinting, entering the museum during regular hours, hiding in a broom closet and walking out the building with the painting hidden ... (Cf. L’Illustration, Le Retour de la Joconde). Peruggia was an Italian patriot who believed Leonardo's painting should be returned to Italy for display in an Italian museum. 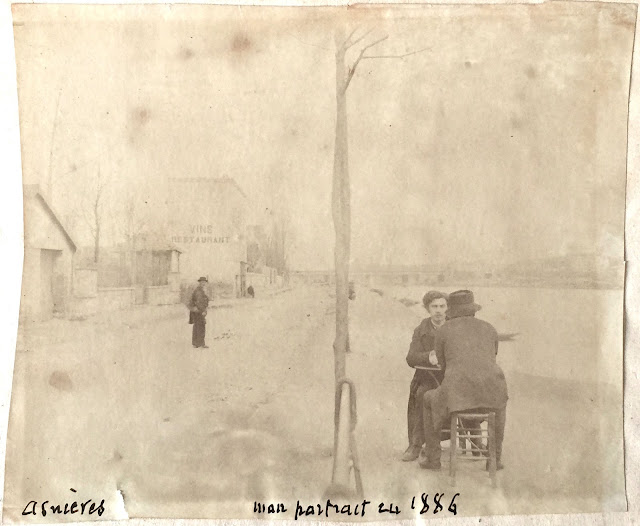 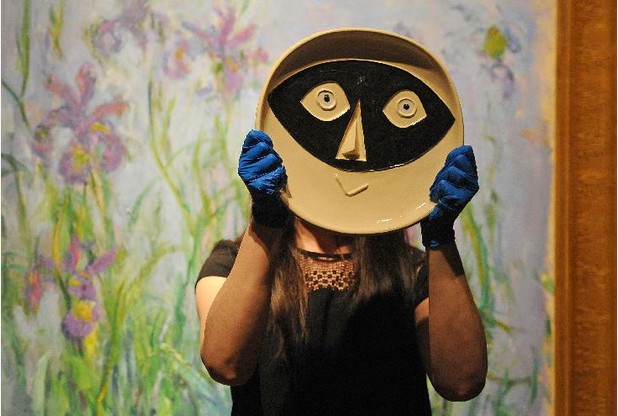 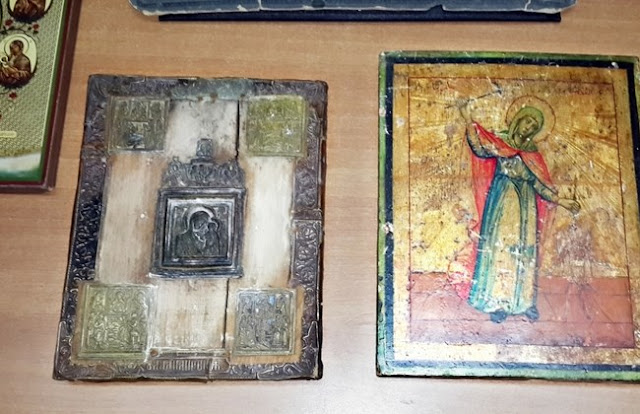 BEIRUT: As militants and opportunists take advantage of regional chaos to loot antiquities, Lebanon is filling warehouses with trafficked artifacts, keeping the priceless objects under lock and key until they can be returned to their countries of origin. The international cooperation, which has been going on for many years, has taken on new importance as the conflicts in Iraq and Syriathreaten to destroy cultural heritage across the region 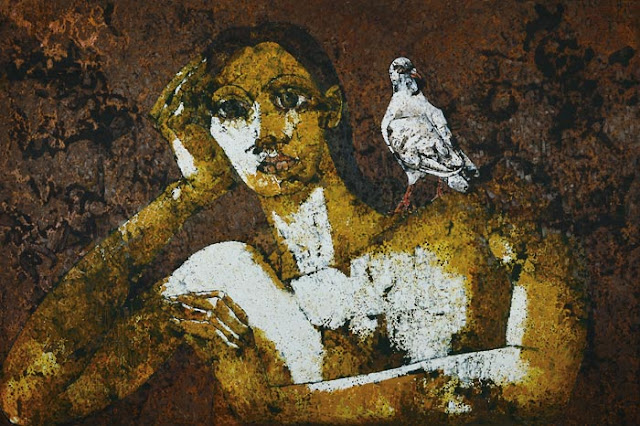 Jamil Naqsh’s work is increasingly an elaboration of a private mythology – but a mythology that is, nevertheless, deeply rooted in the culture the artist belongs to. This mythology is, above all else, romantic. Romantic, both in the sense that it involves a backward glance, or a series of backward glances, to the Indian subcontinent’s princely past, and also, in a very different way, to the tradition of courtly love that flourished within that social context 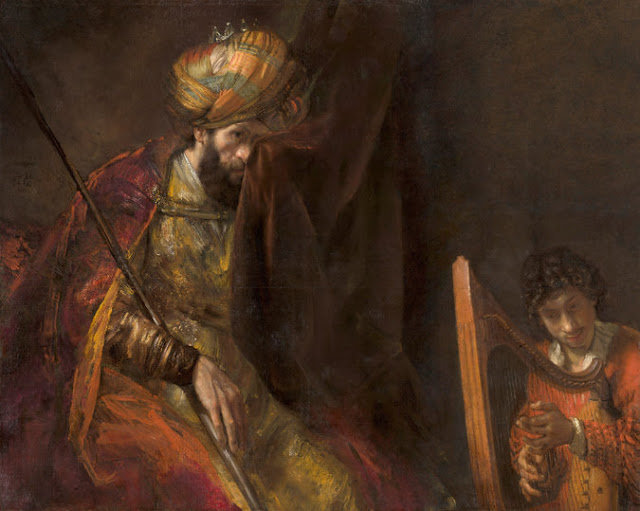 THE HAGUE — The painting was sliced down the middle and straight through its center in the 19th century, probably to be sold as two Rembrandt portraits. At some point in the next 40 years, it was sutured back together with pieces of an entirely different canvas, and layered with paint to cover up its scars.

In 1898, the director of the Mauritshuis Royal Picture Gallery here proudly displayed it in the museum as “Saul and David,” one of Rembrandt’s most important biblical works. Then in 1969, a top Rembrandt authority discredited the painting, and for years it hung next to a label that read, “Rembrandt and/or Studio,” a serious demotion. 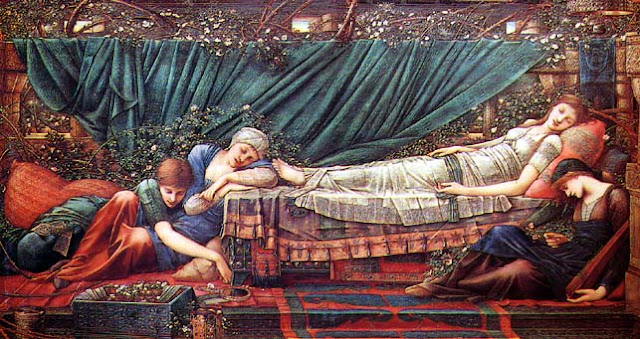 Edward Burne-Jones, The Rose Bower from the "Legend of Briar Rose."Photo via: Wikiamedia Commons

A 2,000-year-old grave of a woman filled with treasures from the Roman Empire has been found in Northern Ethiopia. The British archaeologists who found the grave, have nicknamed the woman "sleeping beauty" because of the way her body had been positioned.

"She was curled up on her side, with her chin resting on her hand, wearing a beautiful bronze ring," Louise Schofield, a former British Museum curator who oversaw the dig, told the Guardian, which reported the story. "She was buried gazing into an extraordinary Roman bronze mirror. She had next to her a beautiful and incredibly ornate bronze cosmetics spoon with a lump of kohl eyeliner." More
Posted by Henry Zaidan at 9:42 AM