29 Paintings by Henri de Toulouse-Lautrec, and his Biography

Henri-Marie Raymond de Toulouse-Lautrec-Montfa was born on November 24, 1864, in the town of Albi, in the south of France. He was the first child and heir of Alphonse Charlers Jean Marie (1838-1913), Count of Toulouse. Henri was probably first introduced to painting through his uncles, several of whom were amateur artists. He received his first tutelage in art from Rene Princeteau, a well-known sports-painter.

Much of Henri's early childhood was spent in the Chateau de Celeyran, his mother's familial home, near the Mediterranean town of Narbonne, where he spent much time drawing and painting the life and landscape of the estate. In 1872, he was enrolled in the prestigious Lycee Fontanes in Paris for 3 years due to health reasons, and moved back to the south of France for the climate.

In 1878, Henri broke his left thigh as he was getting up out of a chair. Bed-ridden, he spent his time reading, drawing and painting. A year later and just barely recovered from his first injury, he broke his other thigh whilst taking a walk. The growth of his legs was stunted forever. His illness was never identified during his lifetime, and nothing would help.

Henri continued to pursue art. By 1880, he had produced as many as two and a half thousand works, in a variety of techniques. Encouraged he returned to Paris to study art. In 1881, he set up residence in Princeteau's Paris studio.

In 1882, he was accepted into the studio of the famous painter and art teacher Leon Bonnat. After Bonnat became a professor at the Paris Academy of Art, Lautrec began to study under Fernand Cormon. Cormon was a talented artist in his own right, and an enthusiastic teacher. 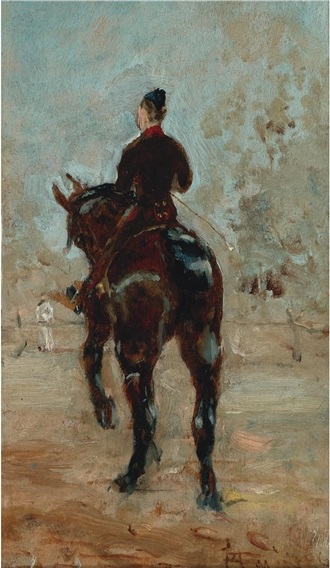 The painter would have many affairs over the course of his rather brief life. All of them would be with women far below his station, and none of them were very long-lasting. Although the artist immersed himself in the life of the lower classes -- the cabarets, the dance halls and the brothels -- he always retained an aristocratic aloofness and a sense of his own superiority. He was not attempting to become part of that life: he was rather an unprejudiced observer; a doctor or a scientist, trying to dissect it and give it life, in his art. Lautrec moved into the Montmartre district in 1884 where he met Edgar Degas, whom he came to admire.
He soon began to frequent the district's cabarets where he displayed his works. That year, he also had his first exhibition at the Pau. 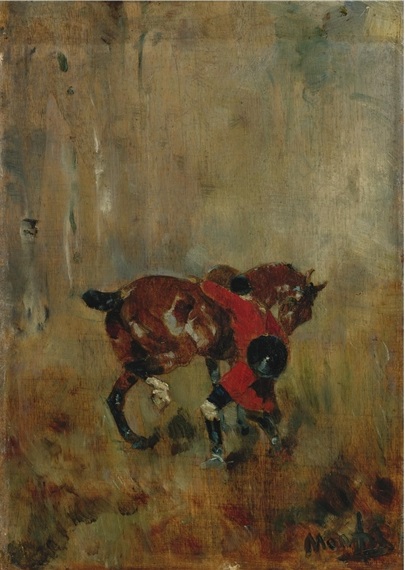 In 1886, Lautrec met Vincent Van Gogh at Cormon's studio, where the Dutch painter had come to study. They quickly became friends, though Lautrec left the studio only a few months later, his education there concluded.

By then Lautrec's art was beginning to attract greater notice. In 1887, he participated in an exhibition in Toulouse;and in Paris, he exhibited together with Van Gogh. He was invited to send some of his work to the les Vingt ("The Twenty") exhibition, taking place early in 1888, in Brussels. Van Gogh stayed with Lautrec in Paris, not long before his suicide in 1890.

The protagonist of this composition is a beautiful prostitute whose name came from "poule" French popular name for girls dedicated to this office, a favorite theme for Toulouse-Lautrec. The woman seems to be deep in thought, mentally away from the sordid world around her. The similarity with Degas. The colors takes over the whole, highlighting its application based on short strokes that occupy the largest area of support.

In 1889, Lautrec participated in the Salon des Independants for the first time and would become a frequent contributor to the Salon's exhibitions. He spent the summer on France's Atlantic coast, yachting. The cabaret Moulin Rouge in the Montmartre opened that year, and Lautrec immediately became a regular; he would often show his work at the establishment. The name Henri de Toulouse-Lautrec became inseparably linked to the Moulin Rouge, and some of his most iconic works were made there, including his notorious Moulin Rouge poster of 1891 (La Goulue), Valentin "the Boneless" Training the New Girls (1890), and others.

Around 1893, moved away from the cabarets and took an interest in literature and theater. He made his first engraving in 1891, and his later works include many lithographs, such as Les Ambassadeurs: Aristide Bruant (1892), May Milton (1895), The Jockey (1899). In 1893, he took part in an exhibition devoted to painters and engravers. That year he had his first solo exhibition at the gallery of Maurice Joyant. He was part of a modern trend for the celebration of individual artistic achievement.

Lautrec spent a lot of the time between 1894 and 1897 travelling. He visited London, Madrid and Toledo in Spain, Brussels, Haarlem and Amsterdam. In England, the painter became acquainted with Whistler and Oscar Wilde, both of whom he saw as role models -- the former for his art, the latter for his lifestyle. In Spain, he took inspiration from the old masters: Velasquez, Goya and El Greco. In Holland, he studied Rembrandt, Bruegel and Hals. In Brussels, in 1895 and again in 1897, he took part in exhibitions organized by the group La Libre Esthetique (The Free Aesthetic), the successors to les Vingt, where his work was exhibited side-by-side with that of Cezanne, Signac, Gauguin and Van Gogh.

Jane Avril (1868–1943) was a French can-can dancer made famous by Henri de Toulouse-Lautrec through his paintings. Extremely thin, 'given to jerky movements and sudden contortions', she was nicknamed La Mélinite, after an explosive. More

He was becoming increasingly so as a result of his drinking, which was rapidly spiraling out of control. In 1894 he moved into one of the brothels he frequented and lived there for some time. Some works painted from his experience there include Rue de  Moulins (1894), Prostitutes Around a Dinner Table (1894), Two Friends(1894-95),  In 1897, he had an attack of delirium tremens, while on summer vacation at Villeneuve-sur-Yonne. His artistic output and his health decreased sharply, as most of his days were spent in various states of intoxication. In 1899, he was confined to a mental hospital.

The Laundress is a picture painted in 1884 by Henri de Toulouse-Lautrec . It measures 193 over 75 cm. It is kept in a private collection. It represents Carmen Gaudin, who was one of his models.

He died on September 9th, 1901, at the age of 36, at his mother's homes in Malrome. His last two paintings were "Admiral Viaud" and "An Examination at the Faculty of Medicine". (Biography by Yuri Mataev). After Toulouse-Lautrec’s death, his mother, the Comtesse Adèle Toulouse-Lautrec, and Maurice Lautrec Monogram Joyant, his art dealer, promoted his art. His mother contributed funds for a museum to be built in Albi, his birthplace, to house his works. As of 2005, his paintings had sold for as much as US$14.5 million.

"In Le Havre the sailors were often English, as were the barmaids who sang and danced in the taproom and might sometimes be persuaded to leave with a customer. A new furia struck Henry--a passion for Miss Dolly, the blonde English girl who served drinks at the Star, where the year before he had done a couple of lithographs of performers leading the audience of sailors and dockers in English songs. Once again Henry both seduced and possessed his conquest, not physically, but through his art. He wrote to Joyant asking him to send paints and brushes" (in Toulouse-Lautrec: A Life, London, 1994, p. 478).

In a letter dated 11 July, Lautrec wrote that he had completed a sanguine drawing of "an English girl at the Star" (S. D. Schimmel, ed., The Letters of Henri de Toulouse-Lautrec, Oxford, 1991, letter 578, p. 355). A week later the artist again wrote to Joyant, advising him that he had just sent "a panel with the head of the Barmaid at the Star" (Letter 579, p. 356). These works are, respectively, Dortu nos. D.4.445 and P. 684; both are in the Musée Toulouse-Lautrec, Albi. The barmaid's name might have gone unrecorded, but Joyant knew her identity. More

Born into a prominent family rich with castles and vineyards, René Princeteau was deaf and dumb from birth. He studied at the National Institute for Young Deaf in Paris . After taking sculpture classes at Bordeaux in 1865 he enrolled at the Imperial School of Fine Arts in Paris, where he studied under the direction of Auguste Dumont.

Friend of Alphonse de Toulouse-Lautrec, he first as a student and then his brother Odo became the first master of Henri de Toulouse-Lautrec from 1871. During the War of 1870 , he enlisted in the artillery of the Army of the Loire. He accumulated a lot of notes and drawings. He rose to prominence with his horse paintings Salon 1885. He produced many paintings of the hunt, racing, as well as landscapes and equestrian portraits. In 1883 Princeteau leaves Paris for Libourne where he originates. This period marks the beginning of his great compositions celebrating rural life. He settled in the castle of Pontus near Fronsac on the banks of the Isle.

LOUIS PASCAL. Born in Paris, Pascal was taught at the École nationale supérieure des Beaux-Arts by Émile Gilbert and Charles-Auguste Questel. He won the Grand Prix de Rome for Architecture in 1866, which put him in residency at the Villa Medici in Rome from 1867 through 1870.

After brief service in the Franco-Prussian War, he returned to Paris to assist Hector Lefuel with the restoration of the Louvre, and succeeded Questel as the head of his own old atelier. In 1875, his star rising in the academy system, Pascal was appointed the head architect for the National Library of France. Pascal brought this long project nearly to completion, contributing interiors and exteriors, the Oval Room, the Salon Voltaire, the periodical room, and the grand staircase.

In 1914 Pascal was awarded both the American AIA Gold Medal in 1914 (the fourth ever awarded) and the Royal Gold Medal of the Royal Institute of British Architects. He died in Paris. More

The present work depicts Béatrice Taipé de Céleyran, the artist’s first cousin and goddaughter, and is one of two portraits he painted of her during a family visit in 1897. Unlike his second portrait of Béatrice in which she is seated in a garden and painted from behind her right shoulder (fig. 1), this version shows her in a three-quarter profile at bust length in a non-descript interior. The composition of the portrait and Toulouse-Lautrec’s direct, intimate observation of Béatrice recall the fifteenth-century Netherlandish portraits he frequently studied .

Despite the traditional structure of his composition, Toulouse-Lautrec’s depiction of her is candid. In his endeavor to answer Charles Baudelaire’s call to paint the modern life, he sought to evoke the emotions underlying the human experience. Here, through the loose brushstrokes composing her dress and the soft pink and blue overtones, he removes the formality implied in her pose and creates an honest and endearing rendering of his beloved cousin. More 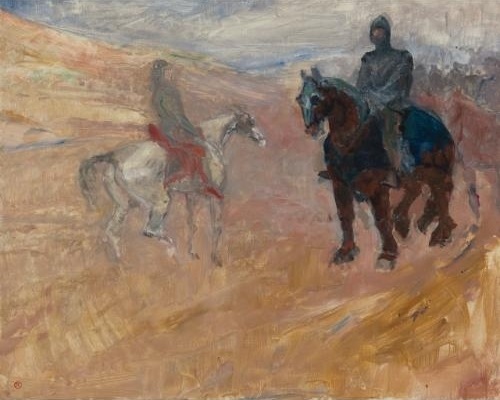