"Khosrow and Shirin", is the title of the famous Persian tragic romance by the Persian poet Nizami Ganjavi (1141–1209). It tells a highly elaborated fictional version of the story of the love of the Sasanian king Khosrow II for the Syriac princess Shirin, who becomes his queen. The essential narrative is a love story of Persian origin which was already well-known from the great epico-historical poem the Shahnameh and other Persian writers and popular tales, and other works have the same title.

Persia, learns from a dream that he is finally going to have a son. After the birth of this beautiful son, named Khusraw Parviz, Hurmuz raises him as a noble prince. When Khusraw becomes a young man he spends his time hunting and cavorting with his lovely maidens.

The Sasanian King Khusraw and Courtiers in a Garden,
Page from a manuscript of the Shahnama of Ferdowsi, late 15th-early 16th century. Brooklyn Museum.

Kingdom of Persia: Shapur, Khosrow's close friend and a painter, tells Khosrow of the Armenian queen Mahin Banu and her niece princess Shirin. Hearing of Shirin's flawless features, the young prince of Persia falls in love with her. 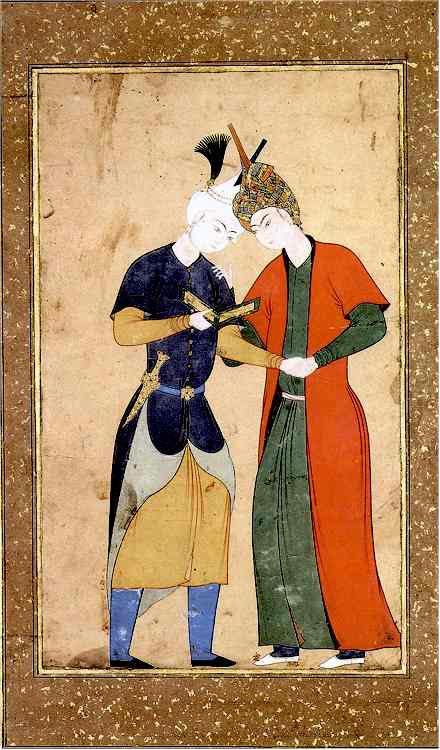 Shapur journeys disguised as a monk. He learns that Shirin lives in seclusion with beautiful virgin maidens. Shirin’s palace has a single window from which she might look occasionally. Shapur secretly goes to the vicinity of the palace. Without being noticed, he places a mirror across from the window and when Shirin’s reflection falls on the mirror, he draws her beautiful image on a piece of paper. He also draws Khusraw’s portrait on the other side of the paper. Suddenly, a swift wind comes up, causing the paper to slip from Shapur’s grasp and float into Shirin’s garden. Shapur then draws another portrait of Shirin from his memory, as a gift for Khusraw. The paper that landed in the garden is discovered by a maiden in Shirin’s residence. When Shirin looks at it and sees an image on each of its sides she becomes deeply affected and immediately falls in love with Khusraw’s image.

Shirin who falls in love with Khosrow and escapes from Armenia to Khosrow's capital Mada'in. Meanwhile, Khosrow also flees from his father's anger and sets out for Armenia in search of Shirin. 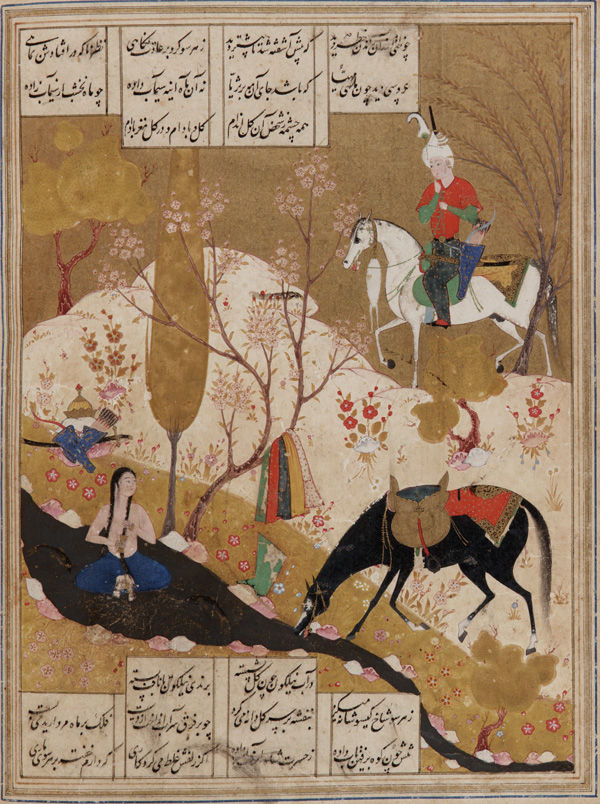 Khosrow Parviz's first sight of Shirin, bathing in a pool, in a manuscript of Nezami's poem. This is a famous moment in Persian literature.

On the way, he finds Shirin unclothed, bathing, and washing her flowing hair; Shirin also sees him; but since Khosrow was traveling in peasant clothes, they do not recognize one another. Khosrow arrives in Azerbaijan and is welcomed by Shamira the queen of Armenia - yet he finds out that Shirin is in Mada'in. Again, Shapur is sent to bring Shirin. Khusraw at the castle of Shirin
(from a manuscript of the Khusraw and Shirim by Nizami), early 15th century, Timurid period, ink, opaque, watercolor and gold on paper 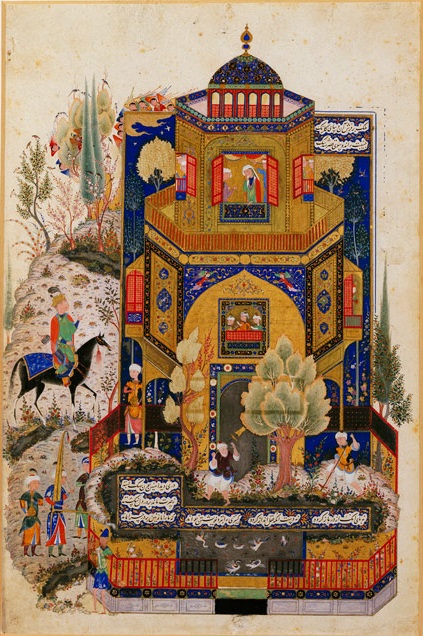 Khusrau in Front of the Palace of Shirin

When Shirin reached Armenia again, Khosrow – because of his father's death- has to return to Mada'in. The two lovers keep going to opposite places till finally Khosrow is overthrown by a general named Bahrām Chobin and flees to Armenia.

Shirin receives Khusraw at her palace in Armenia Khosrow finally meets Shirin and is welcomed by her. Shirin, however, does not agree to marry Khosrow; unless he first claims his country back from Bahram Choobin. 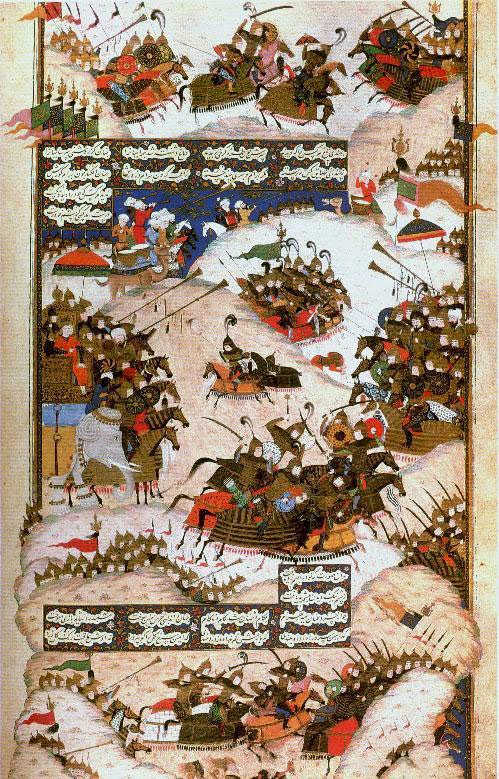 Khosrow leaves Shirin in Armenia and goes to Constantinople.  Ḵosrow appealed to Maurice for help, first as a fellow-ruler who would naturally be disturbed at the sight of a rebel destroying the established order in the neighboring empire, and second on the grounds that the Romans needed the Persians to manage their sector of the outer world lest 'the fierce, malevolent tribes' might take control of Persia and 'thereby in the course of time gain irresistible might, which will not be without great injury to your tributary nations as well'. Caesar agrees to assist him against Bahram Choobin conditioned that he married his daughter Maryam. Khosrow is forced to promise not to marry as long as Maryam is alive. 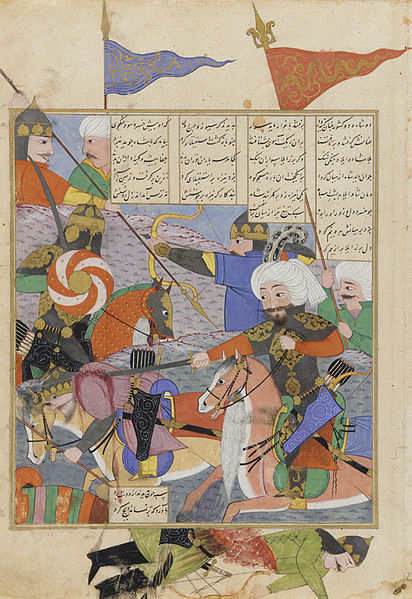 Khosrow succeeds in defeating his enemy and reclaims his throne. Maryam, due to her jealousy, keeps Khosrow away from Shirin. 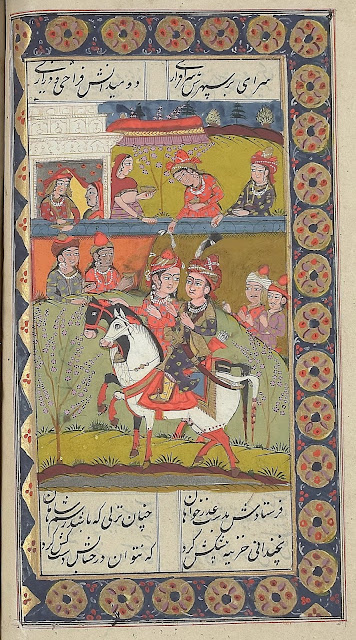 Khosrow Parviz and Shirin in an 18th-century miniature

The sculptor Farhad falls in love with Shirin when he is given the impossible task of opening a channel in the mountains to provide Shirin’s castle with milk.

Hearing of Farhad’s passion for Shirin, Khusraw orders Farhad to be brought to him and tries to discourage him from loving Shirin. Unable to convince Farhad otherwise, Khusraw imprisons him in a deep well on top of a mountain. Farhad digs into this well with a piece of steel and discovers a ruby mine while cutting through the rocks. On each ruby he carves an image of Shirin. When these rubies reach the hands of many, Shirin asks Khusraw to inquire about this. Khusraw calls Farhad to him in order to learn about the secret of the rubies. Khusraw is once again humbled by Farhad’s love for Shirin As a last resort, Khusraw  conjures up a task that he believes Farhad will never be able to complete; opening a passage through her Mount Bisutun for Khusraw’s army—and agrees to  leave Shirin to Farhad if he successfully completes  this assignment. Farhad agrees to the arduous task

Shirin came to see his work but she was tired after her long journey, almost fainting with weakness. Farhad carried her back to the castle: "The tired horse, on the spur of the moment, he raised from the ground, taking him by the mane." Khosrow cannot bide Farhad, so he sends him on an exile to Behistun mountain with the impossible task of carving stairs out of the cliff rocks. Farhad begins his task hoping that Khosrow will allow him marry Shirin. Then, Khosrow sends a messenger to Farhad and gives him false news of Shirin's death. Hearing this false news, Farhad throws himself from the mountaintop and dies.

Khosrow writes a letter to Shirin, expressing his regret for Farhad's death. Soon after this incident, Maryam also dies. According to Ferdowsi's version, it was Shirin who secretly poisoned Miriam. Shirin replies Khosrow's letter with another satirical letter of condolences. Khosrow and Shirin Meet in a Hunting Pavilion, Persia, Safavid, Herat, circa 1610
gouache heightened with gold on paper, text in 4 columns above and below the painting, written in black nasta'liq script, the reverse with a heading in red ink and 24 lines of text, ruled in colours and gold
painting: 25 by 15cm. max.
leaf: 27.5 by 16cm.

Before proposing marriage to Shirin, Khosrow tries to have intimacy with a woman named Shekar in Isfahan; this further delays the lovers' union. Finally, Khosrow goes to Shirin's castle to see her. Shirin, seeing that Khosrow is drunk, does not let him in the castle. She particularly reproaches Khosrow for his intimacy with Shekar. Khosrow, sad and rejected, returns to his palace. Mashhad
Khosrow and Shirin in the company of fish merchant, 1556-1565.

Yet, Shiroyeh, Khosrow's son from his wife Maryam, is also in love with Shirin. Shiroy finally murders his father Khosrow and sends a messenger to Shirin conveying that after one week, she would have to marry him. Shirin, in order to avoid marrying Shiroy, kills herself. Khosrow and Shirin were buried together in one grave. More 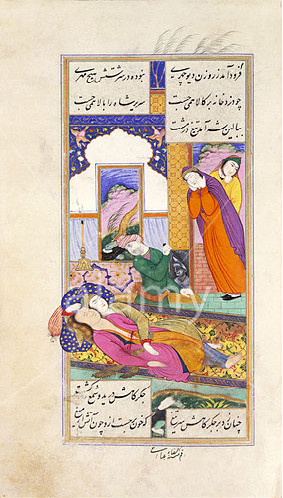 Khusraw Murdered by Son,
by Ganjavi Nizami.
From The Romance of Khusraw and Shirin.
Iran, 17th century


Acknowledgment: Wikipedia, Britannica, Islamic Arts and Architecture,
Posted by Henry Zaidan at 11:11 AM