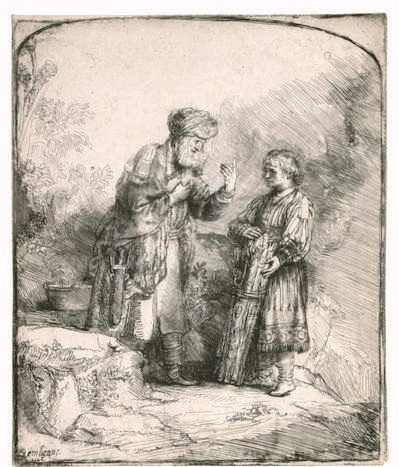 Rembrandt Harmensz van Rijn (Dutch, 1606-1669)
Abraham and Isaac (Bartsch 34; New Hollstein 224)
Etching, 1645, a fine impression of New Hollstein's first state of two, with the archway complete, with touches of burr on the hem of Isaac's coat, on laid, with a partial Strasbourg Lily watermark, with thread margins above and along part of the right edge, otherwise trimmed to the platemark, set into a large piece of laid, 157 x 130mm (6 1/8 x 5 1/8in)

This is the first of two scenes in which Rembrandt depicted different aspects of the biblical story of Abraham and Isaac. Here Abraham beckons his son with his hand raised heavenward indicating that his sacrifice is a result of obedience to God. Etching and burin work combined with selective wiping of the plate produce an atmospheric scene which conveys the emotional dilemma. The story would have had a personal meaning for Rembrandt who had suffered the loss of three children in infancy and would also have resonated with the local Protestant population who had absolute faith in God. More on this Etching

This is the second scene by Rembrandt depicting the story of Abraham and Isaac, where we see the moment when Abraham is about to carry out the sacrifice. It is a highly dramatic scene, with Abraham's left hand outstretched holding the knife in readiness, his right hand covering his son's eyes and the angel grasping both Abraham's arms to prevent the deed. It is a demonstration of complete faith in God which would have appealed to a contemporary viewer. The closely-hatched lines and touches of burr create intense light and shadow, which conveys a sense of movement and of emotional turmoil. More on this Etching

Christ at Emmaus: The Larger Plate depicts the biblical episode when Christ appears to two of his disciples, having risen on the third day after his death and they finally recognize him once they sit down to a meal. The dark shading behind the disciples and highlights on their clothes accentuate their startled gestures. The fine lines create a sketch-like appearance which underlines the transitory nature of the scene. More on this Etching

This depicts a scene from the Old Testament book of Esther. Mordecai foiled a plot to assassinate his son-in-law King Ahasuerus. Haman, a minister in the court, plots to kill Mordecai but Esther intercedes with the king and Haman is sentenced to death instead.

The scene is divided into two distinct halves with Mordecai on horseback and Haman standing before him on the left and the King with Esther and their subjects on the right. Rembrandt uses the architectural frame of the archway to link them and draw the viewer's eye from the crowd to the two figures of Mordecai and Haman, whose fortunes have been reversed. Rembrandt focusses attention on Mordecai by placing him in the archway and using drypoint in the shadows to throw his figure into relief. Rembrandt borrowed elements from a Lucas van Leyden engraving of the same subject and from a painting by his mentor, Pieter Lastman and the composition prefigures that of The Night Watch painted the following year. More on this Etching

Rembrandt used etching, engraving and drypoint to create an extraordinary level of detail and tone. Delicate lines were used to convey the expressions and emotions of the protagonists. The viewer's eye is thus drawn into the image, taking in each individual scene, before settling on the central unifying figure of Christ. The use of chiaroscuro to create depth and and drama is particularly evident in the appearance of this figure illuminated against a very dark background. More on this Etching

Rembrandt Harmensz van Rijn (Dutch, 1606-1669)
Peter and John healing the Cripple at the Gate of the Temple (Bartsch 94; New Hollstein 312)
Etching, engraving and drypoint, 1659, a fine impression of New Hollstein's second state of six, with the right side of Peter's body straightened, his cloak deeply curved across his chest and shading next to his left hand and in the lower right corner, printing with burr and vertical wiping scratches in the sky, on laid with thread margins, with a Foolscap with seven-pointed collar watermark, 180 x 215mm (7 1/8 x 8 1/2in)

Rather than showing the miracle, Rembrandt depicts the moment before, when Peter tells the lame man that he can heal him in the name of God. The lame man is highlighted against the shadow of Peter's cloak, focussing the viewer's attention on this figure and on the point of the scene. The image is carefully constructed, with the two pillars and building on the left depicting the Temple in Jerusalem. The contemporary audience would have been familiar with the pillars as a representation of the guiding presence of God. More on this Etching

Rembrandt Harmensz van Rijn, 1606-1669)
Christ Preaching (La Petite Tombe) (Bartsch 67; New Hollstein 298)
Etching and drypoint, circa 1657, a good 'white sleeve' impression of New Hollstein's first state of two, where the burr has worn away from the right sleeve of the man standing in the left foreground, on laid, with thread margins, possibly with an Arms of Amsterdam watermark, 155 x 207mm (6 1/8 x 8 1/8in)

Rembrandt used this plate for more experimentation. He has made emphatic use of drypoint to enhance the contrast and add gravitas to the scene. The faces are clearly defined and very expressive. In early impressions, the burr remains strong on the right sleeve of the man in the left foreground and these are known as 'black sleeve' impressions. When the burr has worn away, the impressions are referred to as 'white sleeve'.

The etching was called La Petite Tombe by the eighteenth century cataloguer, Edme-Francois Gersaint, on the basis that it appeared in the inventory of art dealer Clement de Jonghe listed as La Tombe's little plate, in reference to Nicholas La Tombe who probably commissioned the work. More on this Etching

This etching, and the next, form part of a series depicting the early life of Christ. They have a delicate sketch-like quality and are good examples of etched plates without any reworking. More on this Etching

Rembrandt Harmensz van Rijn, (Dutch, 1606-1669)
Joseph Telling his Dreams (Bartsch 37; New Hollstein 167)
Etching, 1638, New Hollstein's third state of six, with the area in front of the seated girl's face burnished white and shading added in numerous places such as the upper part of the doorway and the face and turban of the central standing figure, on laid, trimmed to the platemark or with thread margins, 110 x 83mm (4 3/8 x 3 1/4in)

Illustrating the story from Genesis chapter thirty-seven, in which Joseph recounts his dreams that he will one day rule, Rembrandt gathers the audience around the figure of Joseph, concentrating the viewer's attention on him. The composition is unusual in that it includes women in what was traditionally described as an all-male event. Fine lines were used to delineate individual faces and additional shading to heighten the sense of tension. More on this Etching

Rembrandt Harmensz van Rijn, (Dutch, 1606-1669)
The Descent from the Cross by Torchlight (Bartsch 83; New Hollstein 286)
Etching and drypoint, 1654, New Hollstein's third state of four, the shadows reworked with diagonal hatching in upper right corner and to left of rectangular space of the building on the right, on laid, with narrow margins, 210 x 161mm (8 1/4 x 6 3/8in)

Another dramatic presentation of a biblical event, when Joseph of Arimathea came to claim the body of Jesus after the crucifixion. Unusually, the main action takes place in the upper left corner and the diagonal composition evokes a sense of movement. The single light source in the image is the torch held by the man next to the cross. The contrast between this bright light and the very dark shadows on the right conveys the gravity and poignancy of this moment, further underlined by the illuminated hand reaching out of the darkness in the center. More on this Etching 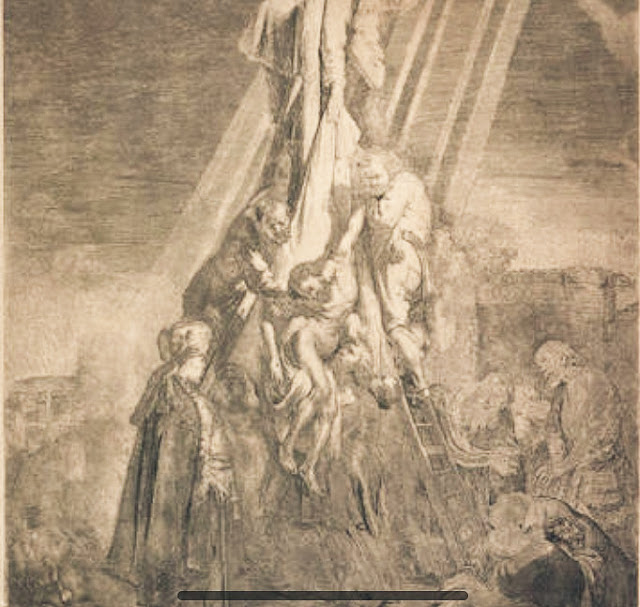 Rembrandt Harmensz van Rijn, (Dutch, 1606-1669)
Descent from the Cross: The Second Plate (Bartsch 81; New Hollstein 119)
Etching and engraving, 1633, the fifth state (New Hollstein's sixth state) with the address of Justus Danckerts coarsely burnished from the lower margin but still partially visible, on laid backed onto wove and set into a thick japan surround, trimmed to the platemark or with narrow margins, indistinct watermark, 528 x 405mm (20 3/4 x 16in)