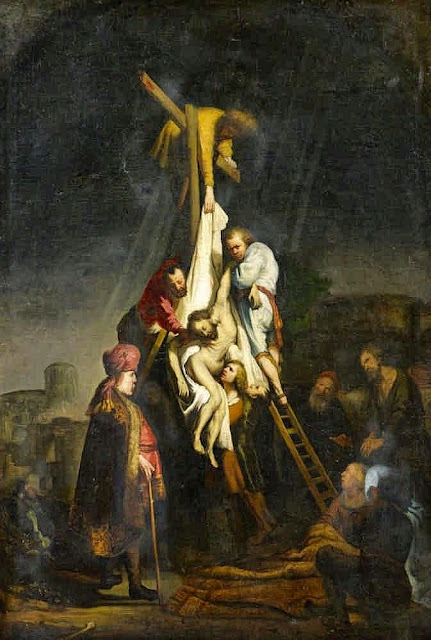 In the center of the painting, surrounded by divine rays, there is the large and superior cross, on which Christ met his death. On its crossbars there are still remains of blood as a sign of Christ's torture. The cross is surrounded by six helpers, who bring down Christ's body from the cross with the help of a large white cloth. All of them concentrate on Christ in the center of the scene. Due to his white skin and surrounded by the white cloth he is directly the center of attention of the painting. The corpulent Jewish councilman, Joseph of Arimathia, who wears an oriental robe consisting of a cloak and a large turban, stands to the right and observes the scene. On the right there are two more male observers and next to a repoussoir figure there are Saint Mary Magdalene and Mary, who wears a blue cloak and whose face is hidden. Besides the light center the soft blue of Mary's coat is the only other illuminated spot in the painting. In the foreground a heavy, patterned cloth is kept available in order to wrap Christ into it. In the background on the left there is the destroyed temple of Jerusalem. On the right there is a bone as a hint to the site of Calvary where the cross had been erected on the grave of Adam. However, the entire background is darkened and the motifs are barely recognizable.

Rembrandt emphasises the human and suffering features of Christ Crucified in his version of the subject. An inverted etching of the painting by Rembrandt with minor variations can be dated 1633. The painter of this picture presumably knew that print, possibly he also knew the Deposition from the Cross by Rembrandt himself, and chose it as a model. He was familiar with Rembrandt's Chiaroscuro painting and its dramatic effects as well as with his preference for oriental costumes. More
Posted by Henry Zaidan at 10:56 AM