Religious Art from the Bible, Otto van Veen's Christian knight against the seven deadly sins and death itself Paintings from the Bible 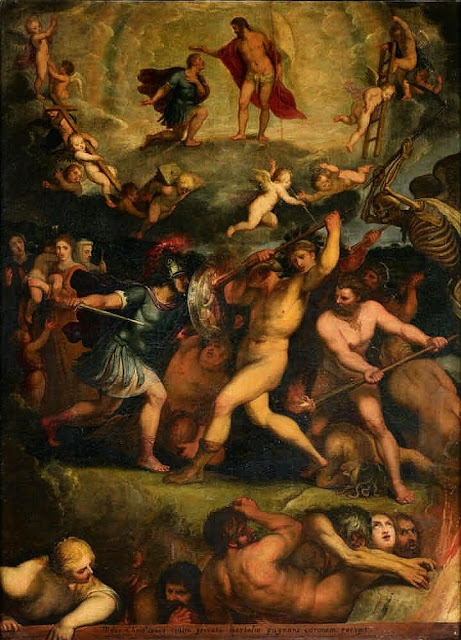 Otto van Veen was one of Antwerp's leading figure painters and he was the teacher of Peter Paul Rubens. His work "Miles Christianus", which depicts the dramatic battle of the Christian knight against the seven deadly sins (wrath, greed, sloth, pride, lust, envy, and gluttony) and death itself,  Presumably it was created between 1609 and 1629 for a Cologne cleric and in the 19th century it came to the collection of Johann Jakob Merlo who is known for his fundamental article "Nachrichten von dem Leben und den Werken Kölnischer Künstler" (news of the lives and works of Cologne artists) from 1850. After his death in 1890 the painting was sold by auction and after decades of uncertainty it was rediscovered in a private collection only a few years ago.
Above the young hero there is a host of angels who show him the weapons of Christ in order to fortify him. The ground is split and in the abyss there are men who abandoned themselves to vices. They make desperate gestures, are surrounded by flames and have to bear the torture of damnation. On high we see the future lying ahead of the hero: there is Christ who rewards the kneeling young man with the crown of the Blessed.
The motif of the painting itself has its origin in the letter of Paul to the Ephesians in the bible: Eph.6, 10-17.
Otto van Veen worked at the court of the prince-bishop of Liège, Gerard von Groesbeck, in Rome, at the Prague Court of Emperor Rudolf II. and at the Munich Court of the Wittelsbacher before he finally came to Cologne in 1583 where he became court painter of the Cologne elector Ernst of Bavaria. More on Otto van Veen