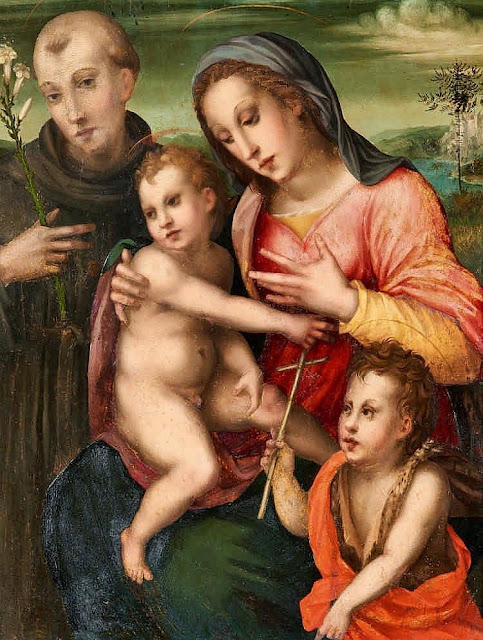 According to the inscription verso the present panel belonged to the collection of Karl Ludwig of Bourbon-Parma (1799-1883), and from 1824 to 1847 Duke of Lucca. The Duchy was passed to the Bourbons in the course of the Congress of Vienna in 1815. In the years Karl Ludwig spent in Tuscany, he gathered up a considerable collection of paintings, amongst others famous works such as Raphael's Madonna dei Candelabri (today in Walters Art Museum, Baltimore) or Francesco Francia's Madonna and Child with Saint Anne and other Saints (London, National Gallery).

The panel is of documentary value for the former collection of Duke Karl Ludwig and it represents an important rediscovery for the Oeuvre of Domenico Ubaldinis, called Puligo. More on this painting

Andrea del Sarto (1486–1530) was an Italian painter from Florence, whose career flourished during the High Renaissance and early Mannerism. Though highly regarded during his lifetime as an artist senza errori ("without errors"), his renown was eclipsed after his death by that of his contemporaries, Leonardo da Vinci, Michelangelo and Raphael.
By 1494 Andrea was apprenticed to a goldsmith, and then to a woodcarver and painter named Gian Barile, with whom he remained until 1498. According to his late biographer Vasari, he then apprenticed to Piero di Cosimo, and later with Raffaellino del Garbo.
Andrea and an older friend Franciabigio decided to open a joint studio at a lodging together in the Piazza del Grano. By the time the partnership was dissolved, Sarto's style bore the stamp of individuality. According to the Encyclopædia Britannica, it "is marked throughout his career by an interest, exceptional among Florentines, in effects of colour and atmosphere and by sophisticated informality and natural expression of emotion." More on Andrea del Sarto