01 Paintings by the Orientalist Artists in the Nineteenth-Century, with footnotes, 25 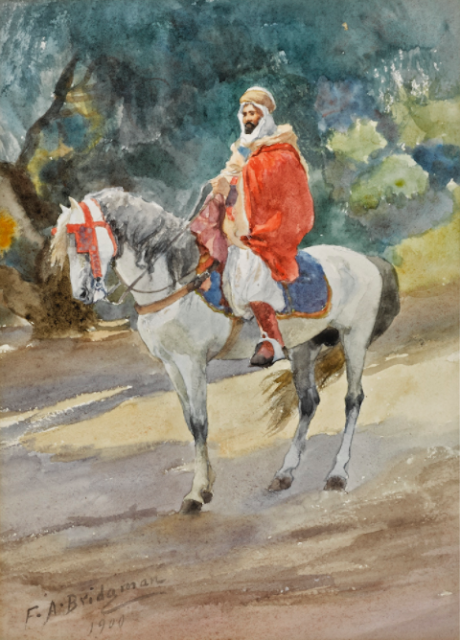 Spahis were light cavalry regiments of the French army recruited primarily from the indigenous populations of Algeria, Tunisia and Morocco.

Following the French occupation of Algiers in 1830, detachments of locally recruited irregular horsemen were attached to the regiments of light cavalry assigned to North African service. These auxiliaries were designated as chasseurs spahis. In 1834 they were organised into four squadrons of regular spahis. In 1841 the 14 squadrons by then in existence were brought together in a single corps of spahis. Finally, in 1845 three separate Spahi regiments were created: the 1st of Algiers; the 2nd of Oran and the 3rd of Constantine.

The spahi regiments saw extensive service in the French conquest of Algeria, in the Franco-Prussian War, in Tonkin towards the end of the Sino-French War (1885), in the occupation of Morocco and Syria, and in both World Wars. A detachment of Spahis served as the personal escort of Marshal Jacques Leroy de Saint Arnaud in the Crimean War. A contingent of Spahis also participated in the North China campaign of 1860. During the Franco-Prussian War of 1870-71 one detached squadrons of Spahis formed part of the forces defending Paris, while a provisional regiment comprising three squadrons was attached to the Army of the Loire. A serious rising against French rule in Algeria during 1871–72 was sparked off by the mutiny of a squadron of Spahis who had been ordered to France to reinforce those units already there.  More on Spahis


Frederick Arthur Bridgman (November 10, 1847 - 1928) was an American artist, born in Tuskegee, Alabama. The son of a physician, Bridgman would become one of the United States' most well-known and well-regarded painters and become known as one of the world's most talented "Orientalist" painters. He began as a draughtsman in New York City, for the American Bank Note Company in 1864-1865, and studied art in the same years at the Brooklyn Art Association and at the National Academy of Design; but he went to Paris in 1866 and became a pupil of Jean-Leon Gerome. Paris then became his headquarters. A trip to Egypt in 1873-1874 resulted in pictures of the East that attracted immediate attention, and his large and important composition, The Funeral Procession of a Mummy on the Nile, in the Paris Salon (1877), bought by James Gordon Bennett, brought him the Cross of the Legion of Honor. Other paintings by him were An American Circus in Normandy, Procession of the Bull Apis (now in the Corcoran Gallery of Art, Washington, D.C.), and a Rumanian Lady (in the Temple collection, Philadelphia, Pennsylvania). More on Frederick Arthur Bridgman