01 Paintings by the Orientalist Artists in the Nineteenth-Century, with footnotes, 29 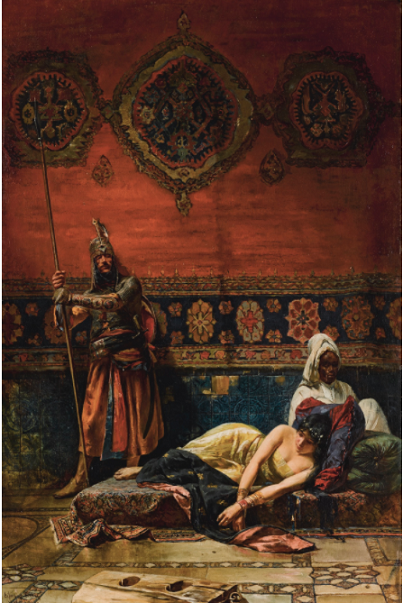 Harem a sacred inviolable place; for female members of the family. Harem properly refers to domestic spaces that are reserved for the women of the house in a Muslim family and are inaccessible to adult males except for close relations. Similar institutions have been common in other Mediterranean and Middle Eastern civilizations, especially among royal and upper-class families and the term is sometimes used in non-Islamic contexts. The structure of the harem and the extent of monogamy or polygamy has varied depending on the family's personalities, socio-economic status, and local customs. A harem may house a man's wife—or wives and concubines, as in royal harems of the past.

In the West, Orientalist imaginary conceptions of the harem as a fantasy world of forbidden sexuality where numerous women lounged in suggestive poses have influenced many paintings, stage productions, films and literary works. Several European Renaissance paintings dating to the 16th century defy Orientalist tropes and portray the women of the Ottoman harem as individuals of status and political significance. In many periods of Islamic history women in the harem exercised various degrees of political power. More on the Harem

Franz Eisenhut (25 January 1857 – 2 June 1903) was a prominent Danube Swabian Realist and Orientalist painter. He is considered one of Austria-Hungary's greatest academic painters in the second half of the 19th century. His works can be found in many European museums across the continent.

Franz Eisenhut was born in Nova Palanka, Voivodeship of Serbia and Banat of Temeschwar, Austrian Empire. His father had hoped for Franz to become a merchant, but the Hungarian painter He studied at Hungarian Royal Drawing School in Budapest from 1875 until 1877. Afterwards, he became a student of the Royal Academy of Fine Arts in Munich. He studied there until 1883.

After finishing the Academy, he went on a trip to the Orient for the first time, visiting the Caucasus. The next year, he held his first exhibition in Budapest. The Orient became his main source of inspiration and Orientalist paintings will become his most famous works. His first great success was the 1886 painting "Healing through the Koran in Beirut".