01 Paintings by the Orientalist Artists in the Nineteenth-Century, with footnotes, 26 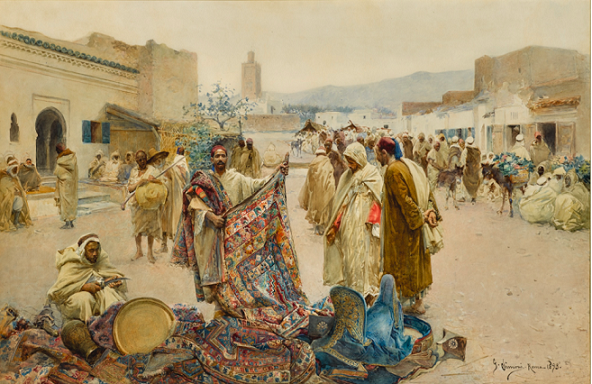 Arab Market Scene is the type of on-site composition that Simoni developed into paintings in his studio from travel sketches in North Africa and the Middle East. Although best known for his Orientalist works depicting mosques and other Islamic subject matter — he was particularly fascinated with the village festivals he witnessed in North Africa — Simoni also created images of everyday life, like this market scene, which depicts the daily workings of a village community conversing, walking, and selling beautifully crafted, decorative wares. More on the Arab Market

Gustavo Simoni ( Rome , 5 November 1845 - Palestrina , 1926 ) was an Italian painter and teacher. He was born in Rome. He had a younger brother, Scipione, who directed him to painting.

He chose to follow the innovative road marked by Mariano Fortuny. Starting in 1877 Gustavo Simoni traveled extensively, going to France, Spain and Africa, where he stayed several times in Algeria, Tunisia and Morocco. He settled for many years in the ancient city of Tlemcen, in Algeria, in an isolated house where he welcomed friends who came from Rome. He had relationships with authoritative personalities of the place. His fame was gained among collectors and connoisseurs. He won the Gold Medal at the Paris Salon of 1889 and was again awarded in 1895, at the Exposition of Fine Arts in Rome.


He became a member of the Accademia di San Luca . In the late nineteenth century he opened a studio in Paris, where he attended the main exponents of symbolism, satisfying the requests for the orientalist genre in watercolor and, in large sizes, in oil. Back in Rome, he founded his own school of Orientalist painting. He lived in a farmhouse in Via di Villa Patrizi. More on Gustavo Simoni