01 Paintings by the Orientalist Artists in the Nineteenth-Century, with footnotes, 23 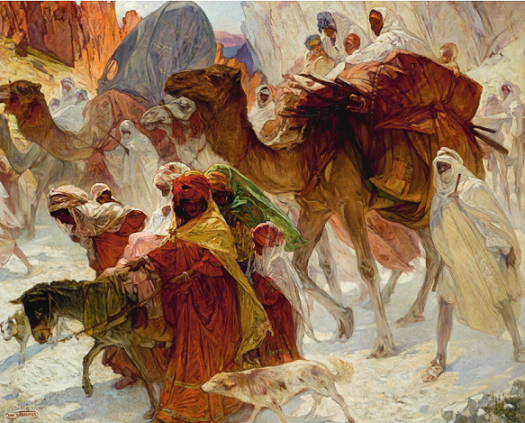 El Kantara is a town and commune in Biskra Province, Algeria. The 1911 Baedeker travel guide described it as "one of the most important caravan-stations in E. Algeria." The town is well known for the eponymous gorge nearby, described by locals as the "Mouth of the Desert" (see in the background). The area was named El Kantara by Arab conquerors. More on El Kantara

Jules Pierre van Biesbroeck (1873 - 1965) was a Belgian painter of landscapes and portraits, as well as sculptures.

He gained his artistic skills from his father Jules Evarist van Biesbroeck. He studied at the Academy of Fine Arts in Ghent.  Debuted in 1888 at the Salon des Champs-Elysées in Paris with his large-format painting "Le lancement d'Argos", which created a scandal. He was like his father, a professor of the Academy in Ghent. On a  trip to North Africa in 1926, he began to treat themes of the Orient. He experimented mainly with light effects in his paintings. Until 1935 he also maintained a studio in Algiers.