01 Painting, Streets of Paris, by the artists of the time, Part 54 - With Footnotes 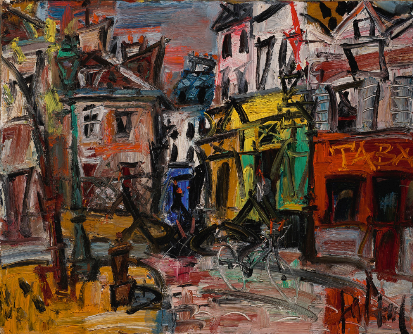 The Place du Tertre is a square in the 18th arrondissement of Paris. Only a few streets away from Montmartre's Basilica of the Sacré Cœur and the Lapin Agile, it is near the summit of the city's elevated Montmartre quarter. Place du Tertre was the heart of the prestigious Benedictine Montmartre Abbey, established in 1133 by King Louis VI. Place du Tertre was opened to the public in 1635 as Montmartre village central square. From the end of the 18th century until World War One, the whole Montmartre Boheme could been seen here: painters, songwriters and poets.

With its many artists setting up their easels each day for the tourists, the Place du Tertre is a reminder of the time when Montmartre was the mecca of modern art. At the beginning of the 20th century, many painters including Pablo Picasso, Amedeo Modigliani, and Maurice Utrillo were living there.  More on Place du Tertre

Gen Paul (July 2, 1895 – April 30, 1975), was a French painter and engraver. Born in in Montmartre, he began drawing and painting as a child. Gen Paul was trained to work in decorative furnishings. He served in the French army during World War I and was wounded twice, losing one of his legs. During his convalescence, he returned to painting. Although Gen Paul never received any formal training, he made a living from his art for almost 60 years. While his early works reflected the influences of his friends in Montmartrel, he soon developed dynamic form of expressionism reflecting influences as varied as Toulouse-Lautrec, Van Gogh, Cézanne, Goya, Velázquez and El Greco. Due to the dynamism and motion inherent in his paintings, some consider Gen Paul to be the first action painter, a precursor to the abstract expressionists of the 1950s.

Gen Paul died at the Pitié-Salpêtrière Hospital in Paris on 30 April 1975. More on Gen Paul