01 Painting, Streets of Paris, by the artists of the time, Part 55 - With Footnotes 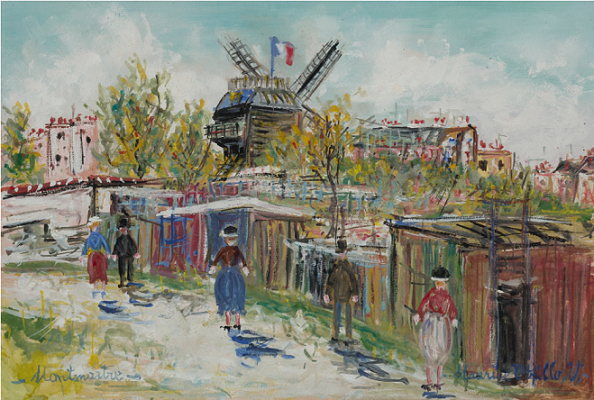 Maurice Utrillo, (26 December 1883 – 5 November 1955), was a French painter who specialized in cityscapes. Born in the Montmartre quarter of Paris, Utrillo is one of the few famous painters of Montmartre who was born there.

Utrillo was the son of the artist Suzanne Valadon, who was then an eighteen-year-old artist's model. She never revealed who was the father of her child. In 1891 a Spanish artist, Miguel Utrillo y Molins, signed a legal document acknowledging paternity, although the question remains as to whether he was in fact the child's father.

Suzanne's mother was left to raise the young Maurice, who soon showed a troubling inclination toward truancy and alcoholism. When a mental illness took hold of the 21-year-old Utrillo in 1904, his mother encouraged him to take up painting. He soon showed real artistic talent. With no training beyond what his mother taught him, he drew and painted what he saw in Montmartre. After 1910 his work attracted critical attention, and by 1920 he was internationally acclaimed. In 1928, the French government awarded him the Cross of the Légion d'honneur. Throughout his life, however, he was interned in mental asylums repeatedly.

In middle age Utrillo became fervently religious and in 1935, at the age of fifty-two, he married Lucie Valore and moved to Le Vesinet, just outside Paris. By that time, he was too ill to work in the open air and painted landscapes viewed from windows, from post cards, and from memory.

Although his life also was plagued by alcoholism, he lived into his seventies. More on Maurice Utrillo