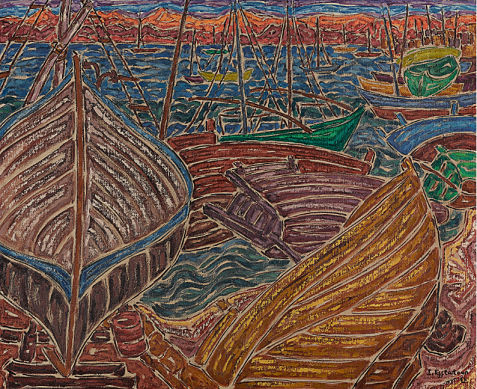 A felucca is a traditional wooden sailing boat used in protected waters of the Red Sea and eastern Mediterranean, in Egypt and Sudan (particularly along the Nile), including Malta and Tunisia, and also in Iraq. Its rig consists of one or two lateen sails.

The crew consists of two or three people. Despite the availability of motorboats and ferries, feluccas are still in active use as a means of transport in Nile-adjacent cities like Aswan or Luxor. They are especially popular among tourists who can enjoy a quieter and calmer mood than motorboats have to offer. More on felucca

Inji Aflatoun was an Egyptian painter and activist in the women's movement. She was a "leading spokeswoman for the Marxist-progressive-nationalist-feminist movement in the late 1940s and 1950s", as well as a "pioneer of modern Egyptian art" and "one of the important Egyptian visual artists"

During school, Aflatoun liked to paint and her parents encouraged her. Her private art tutor, Kamel al-Timisani, a leader in an Egyptian Surrealist collective called the Art and Freedom Group, introduced her to surrealist and cubist aesthetics. She stopped painting from 1946 to 1948, considering that what she was painting no longer corresponded to her feelings. Her interest was later renewed after visiting Luxor, Nubia, and the Egyptian oases. During these trips, she had the opportunity to "penetrate the houses and sketch men and women at work". She studied for a year with the Egyptian-born Swiss artist Margo Veillon. During this period, she made individual exhibits in Cairo and Alexandria and showed at the Venice Biennale in 1952 and the São Paulo Art Biennial in 1956. In 1956 she became friends with and was later influenced by the Mexican painter David Alfaro Siqueiros.

In 1942, she joined Iskra, a Communist youth party. After graduating from the Fuad I University in Cairo, she was, with Latifa al-Zayyat, a founding member in 1945 of the Rabitat Fatayat at jami'a wa al ma' ahid (League of University and Institutes' Young Women).

She was arrested and secretly imprisoned during Nasser's roundup of communists in 1959. After her release in 1963, Egypt's Communist party having been dissolved, she devoted most of her time to painting. She later declared: "Nasser, although he put me in prison, was a good patriot."

She was able to continue painting during her imprisonment. Her early prison paintings are portraits, while the later are landscapes. In the years after her liberation, she exhibited in Rome and Paris in 1967, Dresden, East Berlin, Warsaw and Moscow in 1970, Sofia in 1974, Prague in 1975, New Delhi in 1979.[6] Her paintings are filled with "lively brushstrokes of intense color" reminding some observers of Van Gogh or Bonnard. Her art of later years is characterised by an increasing use of large white spaces around her forms. More on Inji Aflatoun