01 Paintings, Streets of Paris, by the artists of the time, Part 50 - With Footnotes 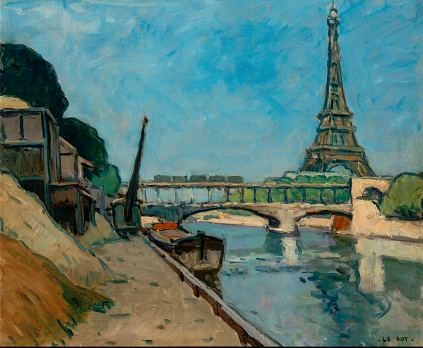 The Eiffel Tower is a wrought-iron lattice tower on the Champ de Mars in Paris, France. It is named after the engineer Gustave Eiffel, whose company designed and built the tower.

Constructed from 1887–1889 as the entrance to the 1889 World's Fair, it was initially criticised by some of France's leading artists and intellectuals for its design, but it has become a global cultural icon of France and one of the most recognisable structures in the world. More on the Eiffel Tower

Before World War I the name was also applied to artists involved in the many collaborations and overlapping new art movements, between post-Impressionists and pointillism and Orphism, Fauvism and Cubism. In that period the artistic ferment took place in Montmartre and the well-established art scene there. But Picasso moved away, the war scattered almost everyone, by the 1920s Montparnasse become a center of the avant-garde. After World War II the name was applied to another different group of abstract artists. More on School of Paris