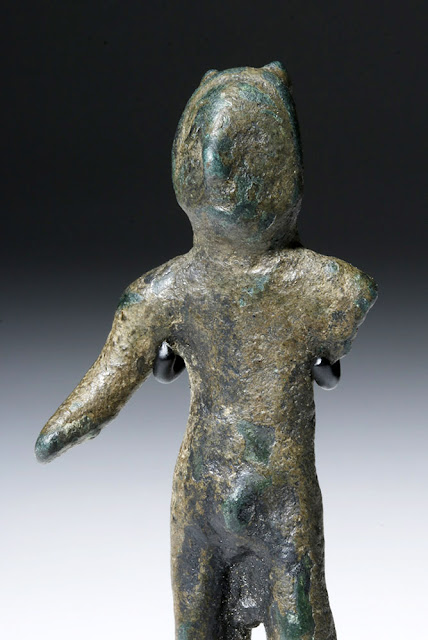 Southwestern Arabia, modern day Yemen, 1st millennium BCE. This is a bronze statuette of a human figure with thin arms and legs and a somewhat animalistic face, complete with two pointed ears. During the first millennium BCE, this part of the world saw several kingdoms - Qataban, Saba (Sheba), and Himyar - emerge who had built their wealth upon desert trade and in particular frankincense and myrrh. Those two resins were burnt on every altar from the Mediterranean to the Near East, enriching this area. They used some of their wealth to create a wide variety of bronze statues, including small copies of larger ones for domestic or personal use; this particular piece is probably a copy of a much larger statue and may have been left as a votive offering or carried by an individual as a good luck charm. Size: 1.25" W x 2.9" H (3.2 cm x 7.4 cm) More on this work 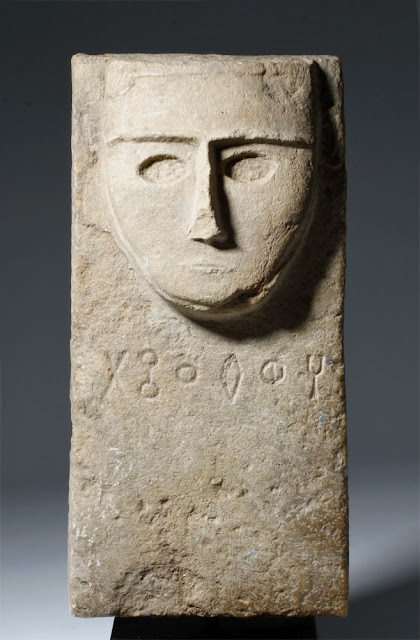 From the ancient Near East, Yemen, ca. 1st millennium BCE. This is a pale brown limestone slab with a carved abstract head with a triangular nose, deep set oval eyes, small mouth, prominent brow ridge, and the suggestion of crown or headdress. At one time, this figure would have had inset eyes with pupils made of shell or some other softer material. Below the face is a clear inscription in the ancient Yemeni alphabet (also known as Old South Arabian), probably in the language of the Kingdom of Qataban. The deceased in ancient Saudi Arabia were often represented in anthropomorphic funerary stelae like this one. They have been found in three areas, one of which was the cemetery at Tamna, the capital city of Qataban. This is a "high-relief" stela. Custom stand included.  More on this work 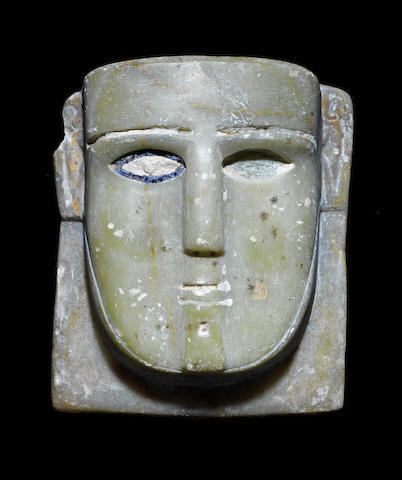 In the form of a rectangular stele with a stylised mask-like face in relief, depicted with flat brows and almond-shaped eyes recessed once for inlay, one eye still retaining the white plaster inlay with blue-glass rim, with a large straight nose and a schematic beard beneath the raised dimpled chin. This head is probably from Marib, the capital of the Sabaean kingdom. There is a very similar head in the National Museum of Yemen, Sana'a.

The Sabaeans or Sabeans were an ancient people speaking an Old South Arabian language who lived in what is today Yemen, in the south west of the Arabian Peninsula.


The kingdom of Saba' has been identified with the biblical land of Sheba. The view that the biblical kingdom of Sheba was the ancient Semitic civilization of Saba in Southern Arabia is controversial. The British Museum states that there is no archaeological evidence for such a queen but that the kingdom described as hers was Saba, "the oldest and most important of the South Arabian kingdoms" Kenneth Kitchen dates the kingdom to between 1200 BCE until 275 CE with its capital Marib. The Kingdom fell after a long but sporadic civil war between several Yemenite dynasties claiming kingship, resulting in the rise of the late Himyarite Kingdom. Sabaeans are mentioned in the biblical books of Job, Joel, Ezekiel, and Isaiah., and in ayat 2:62, 5:69, and 22:17 of the Quran. More 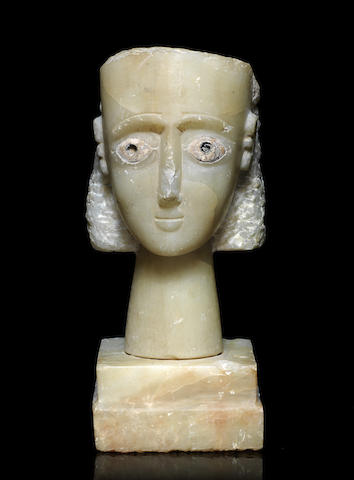 A South Arabian alabaster head of a woman
Qatabanian, circa 1st Century B.C./A.D.
29.5cm (including the base)

With a long neck, the oval face with stylised facial features including arching incised eyebrows above almond-shaped eyes, inlaid with white stone, the long straight nose with a small mouth below, hair falling behind semi-circular ears, set on an alabaster stepped base.

Qataban or Katabania was an ancient Yemeni kingdom. Its heartland was located in the Baihan valley. Like some other Southern Arabian kingdoms it gained great wealth from the trade of frankincense and myrrh, incenses which were burned at altars. The capital of Qataban was named Timna and was located on the trade route which passed through the other kingdoms of Hadramaut, Sheba and Ma'in. The chief deity of the Qatabanians was Amm, or "Uncle" and the people called themselves the "children of Amm".

It was a prominent Yemeni kingdom in the 2nd half of the 1st millennium BCE, when its ruler held the title of the South Arabian hegemon, Mukarrib. More on Qataban 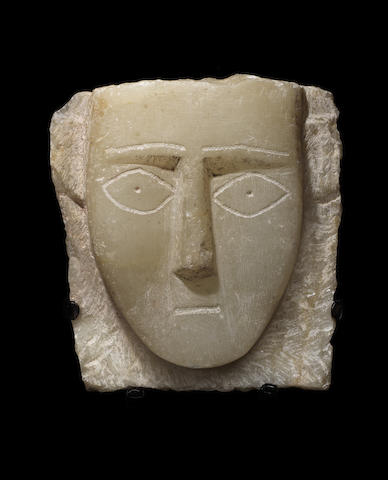 In the form of a rectangular stele, the stylised face carved in relief with incised facial features and a long straight nose, the reverse with a panel of horizontal grooves. 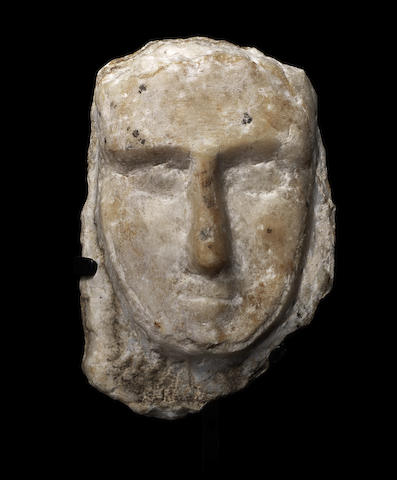 The stylised face with a straight browline above almond-shaped schematic eyes, a long slender nose, and a straight slit mouth, some incision at the chin to represent a beard, the back unworked.