01 Painting, Streets of Paris, by the artists of the time, Part 25 - With Footnotes 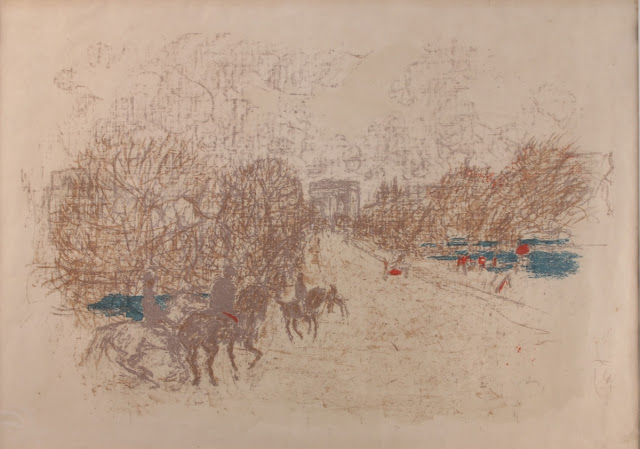 The Arc de Triomphe de l'Étoile is one of the most famous monuments in Paris, standing at the western end of the Champs-Élysées at the center of Place Charles de Gaulle, formerly named Place de l'Étoile — the étoile or "star" of the juncture formed by its twelve radiating avenues.


Paris's Arc de Triomphe was the tallest triumphal arch until the completion of the Monumento a la Revolución in Mexico City in 1938. More on L'Arc de Triomphe

Pierre Bonnard (3 October 1867 — 23 January 1947) was a French painter and printmaker, as well as a founding member of the Post-Impressionist group of avant-garde painters Les Nabis. Bonnard preferred to work from memory, using drawings as a reference, and his paintings are often characterized by a dreamlike quality. The intimate domestic scenes, for which he is perhaps best known, often include his wife Marthe de Meligny.

Bonnard has been described as "the most thoroughly idiosyncratic of all the great twentieth- century painters", and the unusual vantage points of his compositions rely less on traditional modes of pictorial structure than voluptuous color, poetic allusions and visual wit. Identified as a late practitioner of Impressionism in the early 20th century, Bonnard has since been recognized for his unique use of color and his complex imagery. More on Pierre Bonnard