05 Painting, Streets of Paris, by the artists of the time, Part 16 - With Footnotes 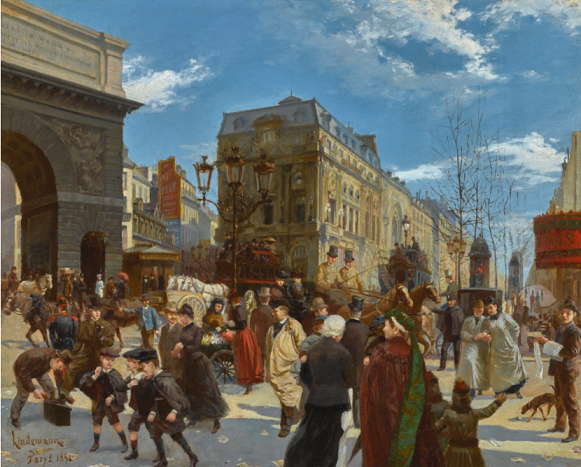 The Porte Saint-Martin was designed by architect Pierre Bullet at the order of Louis XIV in honor of his victories on the Rhine and in Franche-Comté. Built in 1674, it replaced a medieval gate in the city walls built by Charles V. It was restored in 1988. More on The Porte Saint-Martin 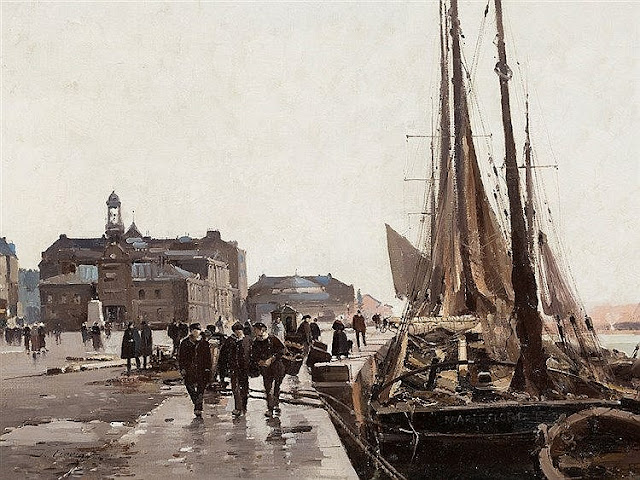 The painting shows a part of the Seine dockside with fishermen, merchants, ships and the cityscape in the background

Eugène Galien-Laloue (1854–1941) was a French artist of French-Italian parents and was born in Paris on December 11, 1854. He was a populariser of street scenes, usually painted in autumn or winter. His paintings of the early 1900s accurately represent the era in which he lived: a happy, bustling Paris, la Belle Époque, with horse-drawn carriages, trolley cars and its first omnibuses. Galien-Laloue's works are valued not only for their contribution to 20th-century art, but for the actual history, which they document. His work can be seen at the Musée des Beaux-Arts, Louvier; Musée des Beaux-Arts, La Rochelle; Mulhouse, France.

A typical Galien-Laloue painting depicts sidewalks and avenues crowded with people or tourists mingling before the capital's monuments. He also painted the landscapes of Normandy and Seine-et-Marne, as well as military scenes he was commissioned to produce in 1914. The Republic of France selected Galien-Laloue to work as a 'war artist,' both during the Franco-Prussian War and World War I, chiefly in watercolor. More on Eugène Galien-Laloue 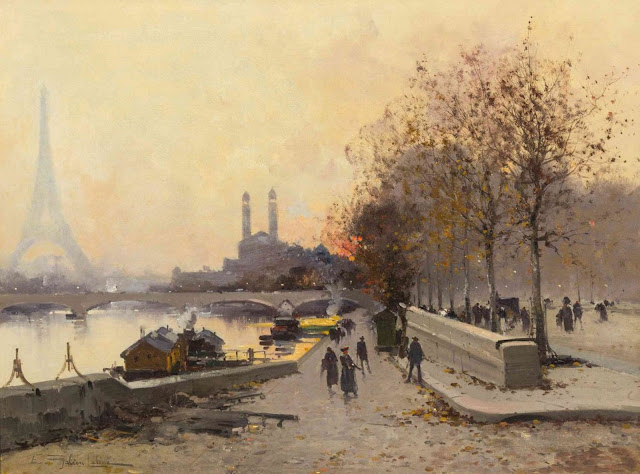 From the Louvre to the Eiffel Tower, from the Place de la Concorde to the Grand and Petit Palais, the evolution of Paris and its history can be seen from the River Seine. The Cathedral of Notre-Dame and the Sainte Chapelle are architectural masterpieces while Haussmann's wide squares and boulevards influenced late 19th- and 20th-century town planning the world over. More on Banks of the Seine 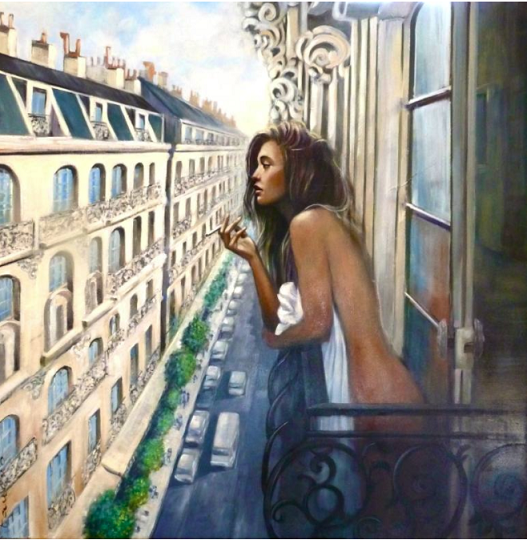 A french girl taking a break on a "haussmannien" balcony.

Haussmann's renovation of Paris was a vast public works program commissioned by Emperor Napoléon III and directed by his prefect of the Seine, Georges-Eugène Haussmann, between 1853 and 1870. It included the demolition of medieval neighborhoods that were deemed overcrowded and unhealthy by officials at the time; the building of wide avenues; new parks and squares; the annexation of the suburbs surrounding Paris; and the construction of new sewers, fountains and aqueducts. Haussmann's work was met with fierce opposition, and he was finally dismissed by Napoleon III in 1870; but work on his projects continued until 1927. The street plan and distinctive appearance of the center of Paris today is largely the result of Haussmann's renovation. More on "haussmannien" architecture

Pascale Taurua is a painter born in 1961, in the French Polynesia. Her father was a carpenter, so she had access from an early age to different materials, which influenced her to start making her first creations. But it was her grandmother and her passion for fabrics, which taught Pascale everything about colors.

After studying at the Conservatory of Art in Papeete,Tahiti, Pascale decided to travel a lot in order to discover new sources of inspiration, colors and patterns, it was as well an opportunity for her to turn definitively to the field of design and painting.

It was also during her trips that Pascale experimented with a new technique that consisted in taking off posters and then modified them by adding paint, following the dripping technique inspired by Jackson Pollock.


Between paintings and collages, Pascale Taurua's pieces are a combination of street art and a more academic art, the artist loves the balance between softness and vitality, tenderness and strength which can be appreciated in all her pieces. More on Pascale Taurua 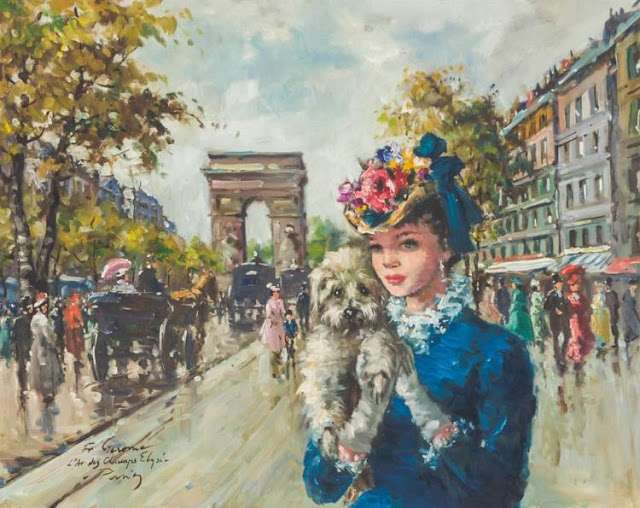 The Avenue des Champs-Élysées is an avenue in the 8th arrondissement of Paris, running between the Place de la Concorde and the Place Charles de Gaulle, where the Arc de Triomphe is located. It is known for its theatres, cafés, and luxury shops, for the annual Bastille Day military parade, and as the finish of the Tour de France cycle race. The name is French for the Elysian Fields, the paradise for dead heroes in Greek mythology. It is one of the most famous streets in the world. More on the Champs-Élysées


François Gérôme (born 1895 in Paris) was a French painter. He is best known for his paintings of women depicted at picturesque spots throughout Paris including the Place de la Concorde and in front of the Opéra. In these representations, the women usually engage the viewer with their frontal pose and direct gaze outward. Gerome used oils, typically on canvas or on board. He signed his paintings with his first initial and last name, but was also known to sign in his alias B. Kovacs. More on François Gérôme