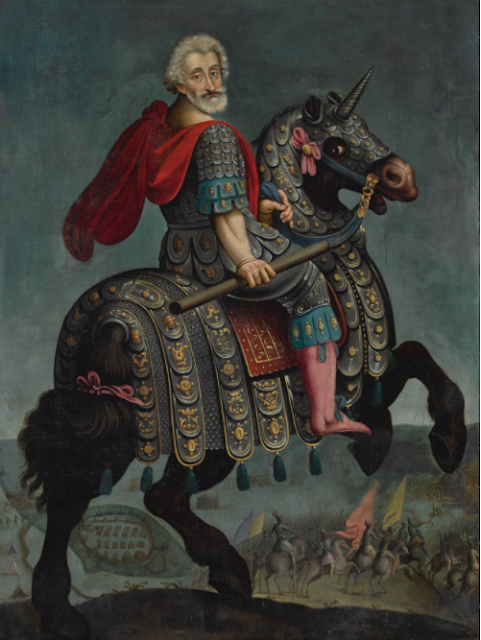 Baptised as a Catholic but raised in the Protestant faith by his mother, Henry inherited the throne of Navarre in 1572 on the death of his mother. As a Huguenot, Henry was involved in the French Wars of Religion, barely escaping assassination in the St. Bartholomew's Day massacre. He later led Protestant forces against the royal army.

He initially kept the Protestant faith and had to fight against the Catholic League, which denied that he could wear France's crown as a Protestant. To obtain mastery over his kingdom, after four years of stalemate, he found it prudent to abjure the Calvinist faith. As a pragmatic politician, he displayed an unusual religious tolerance for the era. Notably, he promulgated the Edict of Nantes (1598), which guaranteed religious liberties to Protestants, thereby effectively ending the Wars of Religion. More on Henry IV

17th-century French art is generally referred to as Baroque, but from the mid to late 17th century, the style of French art shows a classical adherence to certain rules of proportion and sobriety uncharacteristic of the Baroque as it was practiced in Southern and Eastern Europe during the same period.

In the early part of the 17th century, late mannerist and early Baroque tendencies continued to flourish in the court of Marie de' Medici and Louis XIII. Art from this period shows influences from both the north of Europe and from Roman painters of the Counter-Reformation. Artists in France frequently debated the merits between Peter Paul Rubens and Nicolas Poussin.

There was also a strong Caravaggio school represented in the period by the candle-lit paintings of Georges de La Tour. The wretched and the poor were featured in an almost Dutch manner in the paintings by the three Le Nain brothers. In the paintings of Philippe de Champaigne there are both propagandistic portraits of Louis XIII' s minister Cardinal Richelieu and other more contemplative portraits of people in the Jansenist sect. More 17th-century French art