05 Paintings by the Orientalist Artists in the Nineteenth-Century, with footnotes, 12 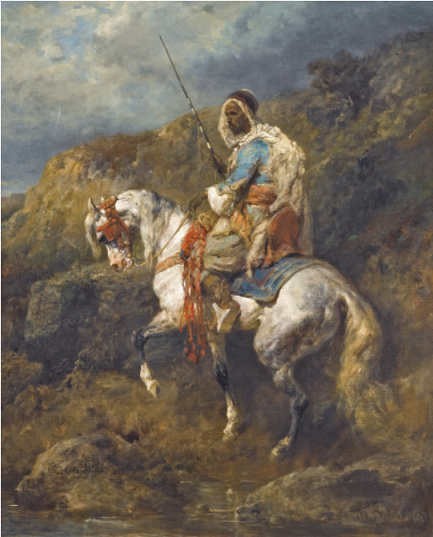 Adolf Schreyer (July 9, 1828 Frankfurt-am-Main – July 29, 1899 Kronberg im Taunus) was a German painter, associated with the Düsseldorf school of painting. He studied art, first at the Städel Institute in his native town, and then at Stuttgart and Munich. He painted many of his favourite subjects in his travels in the East. He first accompanied Maximilian Karl, 6th Prince of Thurn and Taxis through Hungary, Wallachia, Russia and Turkey; then, in 1854, he followed the Austrian army across the Wallachian frontier. In 1856 he went to Egypt and Syria, and in 1861 to Algiers. In 1862 he settled in Paris, but returned to Germany in 1870; and settled at Cronberg near Frankfurt, where he died.

Schreyer was, and is still, especially esteemed as a painter of horses, of peasant life in Wallachia and Moldavia, and of battle incidents. His work is remarkable for its excellent equine draughtsmanship, and for the artist's power of observation and forceful statement; and has found particular favour among French and American collectors. Of his battle-pictures there are two at the Schwerin Gallery, and others in the collection of Count Mensdorff-Pouilly and in the Raven Gallery, Berlin.  More on Adolf Schreyer 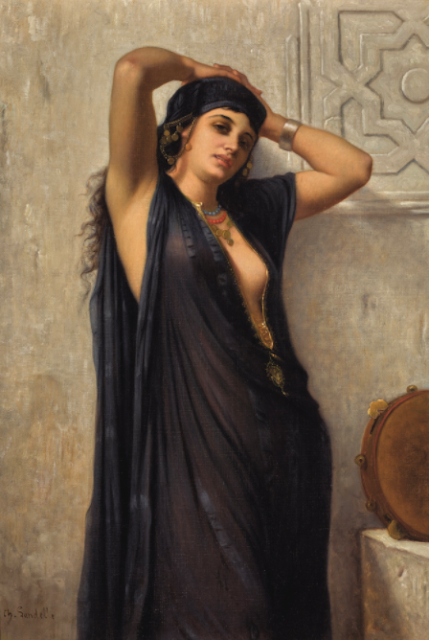 Zacharie Charles Landelle, born on 2 June 1821 In Laval, the October 13 , 1908 In Chennevières-sur-Marne, is a French painter and portraitist. Born to a modest family. In 1857 he married Alice Letronne, daughter of the general of the guard Jean-Antoine Letronne who saved the National Archives in 1848 . Two sons, Georges and Paul, were born of this union, all of whom died during the lifetime of their father.

He followed his father  to Paris 1827. He only return to his hometown only at the end of his life.

He developed a talent and a very solid craft at the Ecole des Beaux Arts in Paris where he was admitted in 1837 as a pupil of Paul Delaroche and Ary Scheffer . At the beginning of his career, he painted several portraits to support himself. Influenced by Italian paintings after traveling in the South of France and Italy, he made copies of some of the paintings by the great masters of the Renaissance at the Louvre.

His portraits and large religious paintings were instantly successful, and allowed him to gain the recognition of the high society of the nineteenth century. Napoleon III admired him very much, bought from him the two canvases of the Beatitudes ( 1852 ) to offer them to the city of Laval. He received numerous state commissions.

From his travels in North Africa and the Middle East in the 1860s , he created works that were often very successful. His first voyage to Morocco dates from 1866. In 1866 he painted Femme Fellah, which earned him the nickname of a painter of the fellahs , a work purchased by the Emperor for his personal collection, but destroyed in the fire at the Château de Saint-Cloud in 1870. A replica, executed By Charles Landelle, is preserved in the museum of the Old Castle of Laval.

In 1875 , he is in Egypt, and travels the Nile with the explorer Mariette . He travelled each year to the East, or Algeria and returned with paintings. At the end of his life, Charles Landelle encouraged the creation in Laval of a museum of painting which he inaugurated in 1895, at the height of his glory, alongside the President of the Republic : it is the current Science Museum. More on Zacharie Charles Landelle 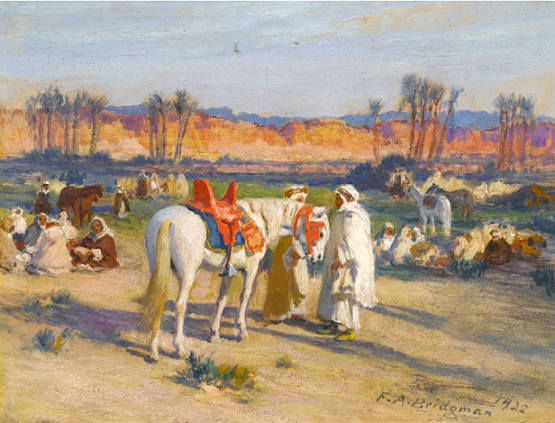 
Frederick Arthur Bridgman (November 10, 1847 - 1928) was an American artist, born in Tuskegee, Alabama. The son of a physician, Bridgman would become one of the United States' most well-known and well-regarded painters and become known as one of the world's most talented "Orientalist" painters. He began as a draughtsman in New York City, for the American Bank Note Company in 1864-1865, and studied art in the same years at the Brooklyn Art Association and at the National Academy of Design; but he went to Paris in 1866 and became a pupil of Jean-Leon Gerome. Paris then became his headquarters. A trip to Egypt in 1873-1874 resulted in pictures of the East that attracted immediate attention, and his large and important composition, The Funeral Procession of a Mummy on the Nile, in the Paris Salon (1877), bought by James Gordon Bennett, brought him the Cross of the Legion of Honor. Other paintings by him were An American Circus in Normandy, Procession of the Bull Apis (now in the Corcoran Gallery of Art, Washington, D.C.), and a Rumanian Lady (in the Temple collection, Philadelphia, Pennsylvania). More on Frederick Arthur Bridgman 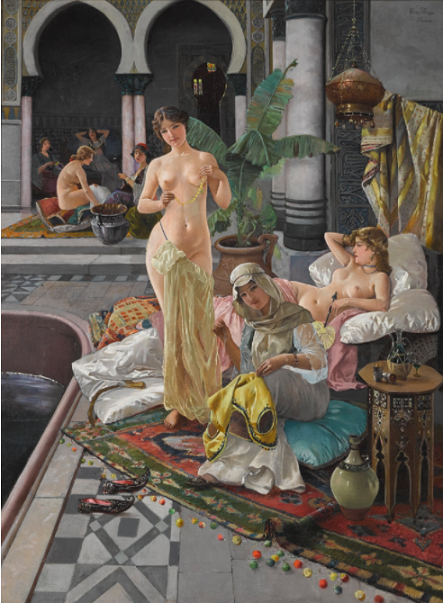 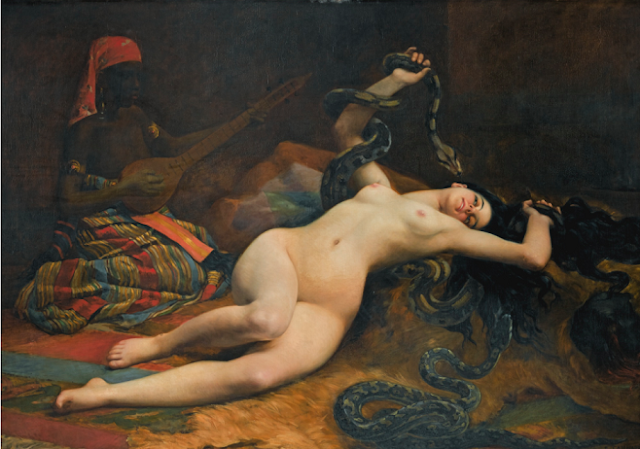 Emile Cambiaggio, 1857 - 1930, ITALIAN was a French visual artist who was born in 1857. Several works by the artist have been sold at auction, including 'Une charmeuse' (above)sold at Christie's London '19th Century European Art' in 2003. More on Emile Cambiaggio