12 Orientalist Paintings by Artists from the 19th Century, with footnotes, 17

Orientalism is a term that is used for the depiction of aspects in Middle Eastern cultures. It refers to the works of the Western artists on Oriental subjects, produced from their travels in Western Asia, during the 19th century. Depictions of Islamic "Moors" and "Turks" can be found in Medieval, Renaissance, and Baroque art. A creative apprehension of a completely different world with its own laws, customs, special attitude towards life and death, love, feelings, and beauty. Wikipedia/Yana Naumovna Lukashevskaya 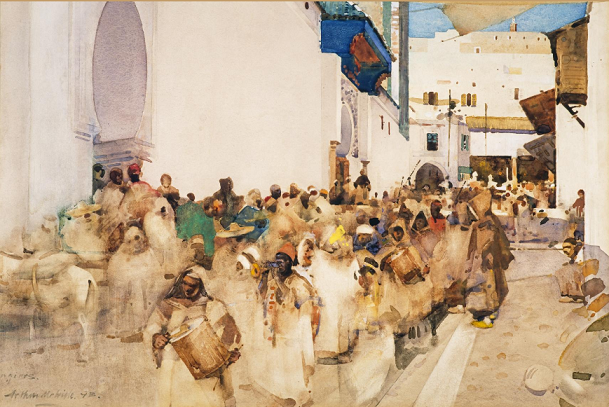 Melville conveys the atmospheric clamour of a local parade led by drummers and pipers. He evokes its exotic character, underlined by the colourful clothes and hooded cloaks of the participants, with his 'blottesque' technique. The resulting blurred edges and striking accents of pure colour, from pigment applied onto wet paper, suggest a wonderful sense of movement in brilliant sunlight. The vibrant city of Tangier attracted many artists, and Melville, inspired by his friend the painter Joseph Crawhall, visited it twice in the spring of 1890 and 1893. More on this painting

Arthur Melville (1858–1904) was a Scottish painter, best remembered for his Orientalist subjects. He was born in Guthrie, Angus in 1858 and brought up in East Lothian. He attended the Royal Scottish Academy Schools before studying in Paris and Greece. The colour-sense which is so notable a feature of his work developed during his travels in Persia, Egypt and Turkey between 1880 and 1882. To convey strong Middle Eastern light, he developed a technique of using watercolour on a base of wet paper with gouache applied to it.

Melville, little known during his lifetime, was one of the most powerful influences in the contemporary art of his day, especially in his broad decorative treatment with water-colour, which influenced the Glasgow Boys. Though his vivid impressions of color and movement are apparently recorded with feverish haste, they are the result of careful deliberation and selection. He was at his best in his watercolors of Eastern life and colour and his Venetian scenes, but he also painted several striking portraits in oils. More on Arthur Melville 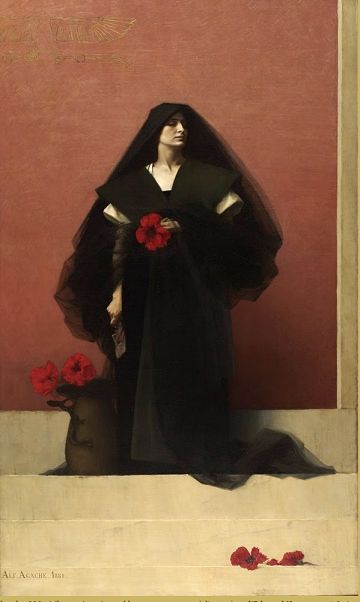 The title of the work, Enigma, is explicit: the picture itself is this enigma. In the Salon of 1888 where it is presented, it is was accompanied by a poem by Edmond Haraucourt (1856-1941)  "Priestess of the enigma and daughter of the mystery / I keep under heaven the secrets which he wishes to make / And I know the future as a fait accompli. / But I have closed my austere soul / In the pride of silence and the peace of forgetfulness. ".

The modernity of the energetic pattern of this canvas still strikes us today; The planes are largely brushed and articulated angularly. The contrasts of light and color are brought to their paroxysm. The iconographic elements are rare and deliberately chosen, whether it be the Egyptian motif painted on the wall or the admirable giant poppy flowers, the red blood of which slices on the orange of the background. 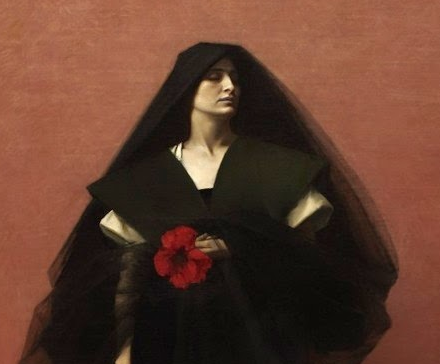 This mysterious woman could be a Parque, a subject dear to Agache, or Isis as the hieroglyphic suggests, or an archetype of the femme fatale. In any case this flower of forgetfulness thrown on the steps, this mask that the woman has just taken off. More on Enigma

Alfred-Pierre Joseph Agache (29 August 1843 – 15 September 1915), also known simply as Alfred Agache, was a French academic painter. Little is known of Agache's life. He was born in Lille, France, and exhibited his work frequently in Paris until his death. He seems to have specialized in portraits and large-scale allegorical paintings. He was a member of the Société des Artistes Français, and won a third-class medal in 1885 for his work. He may have been friends with American painter James Abbott McNeill Whistler and French writer Auguste Angellier; the latter dedicated a book to him around 1893.

Two of his pieces, "Vanity" and "The Annunciation", were shown at the World's Columbian Exposition in Chicago, 1893. He was awarded the Légion d'honneur. He died in Lille in 1915. More on Alfred-Pierre Joseph Agache 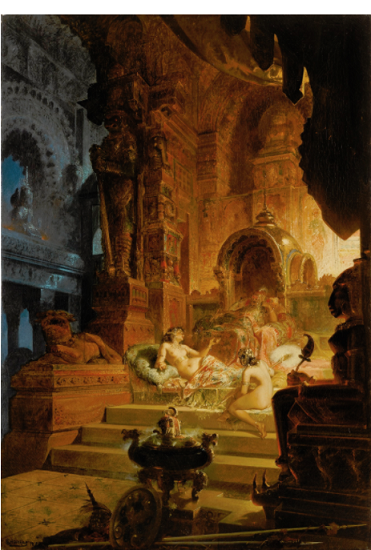 His posters were very influential and famous during World War II. His most famous poster is that of Au Joyeux Moulin Rouge, based on the popular Parisian nightclub Moulin Rouge. He contributed to the satirical weekly Le Courrier français.

He was the younger brother of Léon Choubrac, also a poster artist. More on Alfred Choubrac 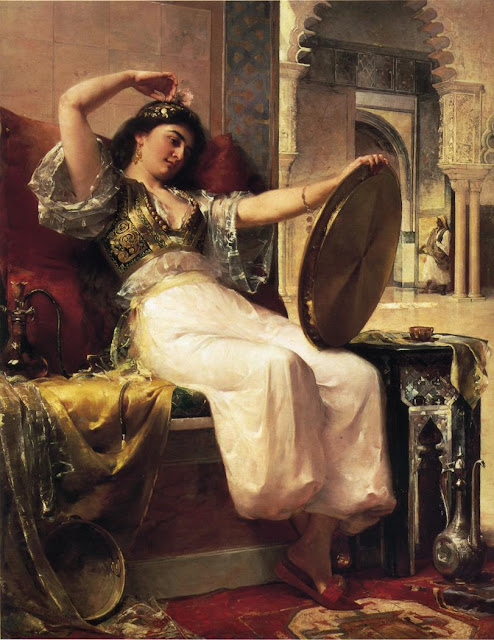 Oliver Dennett Grover (1861 Earlville, Illinois – 1927 Chicago), was an American landscape and mural painter. Grover's family moved to Chicago early in his life. There he spent much of his time sketching at the Academy of Design. Showing great promise he was enrolled at Munich’s Royal Academy in 1879, where he studied under Frank Duveneck. At the age of 19 he exhibited at Munich’s International Exposition. Grover followed Duveneck to Venice and Florence, and then went on to study in Paris from 1883 to 1885 under Gustave Boulanger, Jean-Paul Laurens and Lefebvre.

He returned to Chicago in 1885 and was appointed as an instructor at the Art Institute of Chicago for five years, also opening a studio and founding the Western Art Association. Between 1887 and 1892 he served on the faculty of the Chicago Art Academy. Ada Walter Shulz was among his pupils.

Grover became an Associate of the National Academy of Design in 1913. During the last years of his life, he also became a board member of the Association of Arts and Industries which was a major influence in Chicago design in the 1920s and 1930s.  More on Oliver Dennett Grover 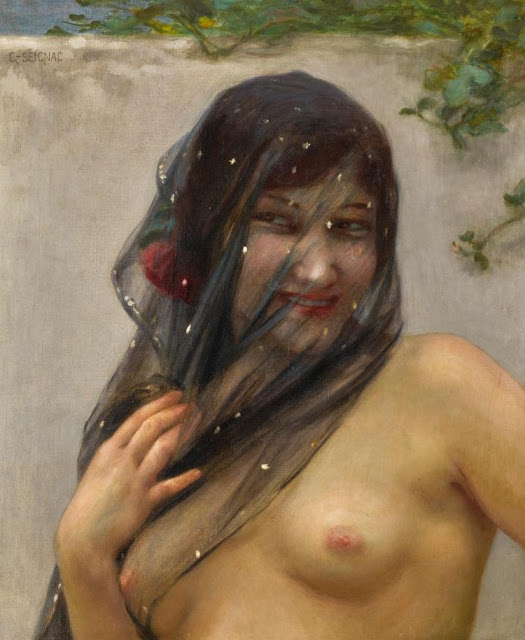 An odalisque was a chambermaid or a female attendant in a Turkish seraglio, particularly the court ladies in the household of the Ottoman sultan. An odalık was not a concubine of the harem, but a maid, although it was possible that she could become one. An odalık was ranked at the bottom of the social stratification of a harem, serving not the man of the household, but rather, his concubines and wives as personal chambermaids. Odalık were usually slaves given as gifts to the sultan by wealthy Turkish men. Generally, an odalık was never seen by the sultan but instead remained under the direct supervision of his mother, the Valide Sultan. More on An odalisque

Guillaum Seignac (1870–1924) was a French academic painter. He was born in Rennes in 1870, and died in Paris in 1924. He started training at the Académie Julian in Paris, where he spent 1889 through 1895. He had many teachers there, including Gabriel Ferrier, William-Adolphe Bouguereau, and Tony Robert-Fleury. In addition to his training in the academic style, much of Seignac's work displayed classical themes and style, for example, his use of diaphanous drapery covering a woman's body is reminiscent of classical style, in particular the sculptor Phidias. In 1897, Guillaume Seignac regularly exhibited at the Salon and won several honors, including in 1900 honorable mention and in 1903 a Third Class medal. More Guillaum Seignac 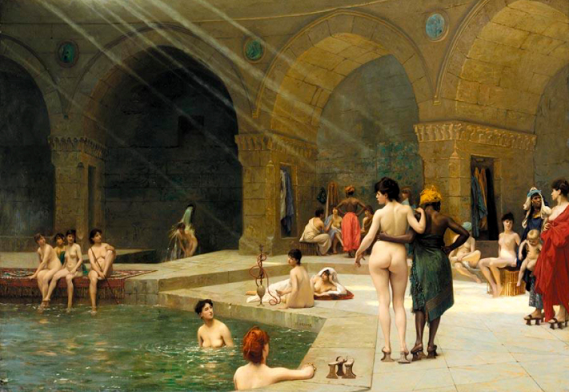 This splendid evocation of ladies lounging around an octagonal hot pool in a Turkish bath is set under the great dome of the caldarium in Yeni Kaplica, Bursa’s ‘New Baths’ built in 1552 from designs possibly by the Master Builder Sinan. Bursa had been the ancient capital of the Ottoman Empire before the conquest of Constantinople in 1453. By the time the present work was executed in 1885 Gérôme had moved away from heroic history painting towards archeological accuracy and objective realism. More on this painting

Jean-Léon Gérôme (11 May 1824 – 10 January 1904) was a French painter and sculptor in the style now known as Academicism. The range of his oeuvre included historical painting, Greek mythology, Orientalism, portraits and other subjects, bringing the Academic painting tradition to an artistic climax. He is considered one of the most important painters from this academic period, and in addition to being a painter, he was also a teacher with a long list of students. More on Jean-Léon Gérôme 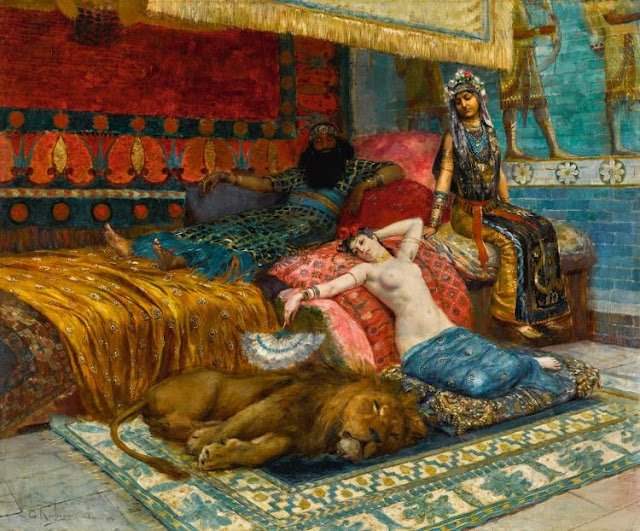 Georges Antoine Rochegrosse (1859–1938) was a French historical and decorative painter. He was born at Versailles and studied in Paris with Jules Joseph Lefebvre and Gustave Clarence Rodolphe Boulanger. His themes are generally historical, and he treated them on a colossal scale and in an emotional naturalistic style, with a distinct revelling in horrible subjects and details. He made his Paris Salon début in 1882 with Vitellis traîné dans les rues de Rome par la populace (Vitellius dragged through the streets of Rome by the people) (1882; Sens). He followed this the year afterwards with Andromaque (1882–83; Musée des Beaux-Arts de Rouen), which won that year's prestigious Prix du Salon. There followed La Jacquerie (1885; Untraced), Le mort de Babylone (The fall of Babylon) (1891; Untraced), The death of the Emperor Geta (1899; Musée de Picardie, Amiens), and Barbarian ambassadors at the Court of Justinian (1907; untraced), all of which exemplify his strong and spirited but sensational and often brutal painting. In quite another style and beautiful in color is his Le Chevalier aux Fleurs (The Knight of Flowers) (1894; Musée d'Orsay, Paris; RF 898). More on Georges Antoine Rochegrosse 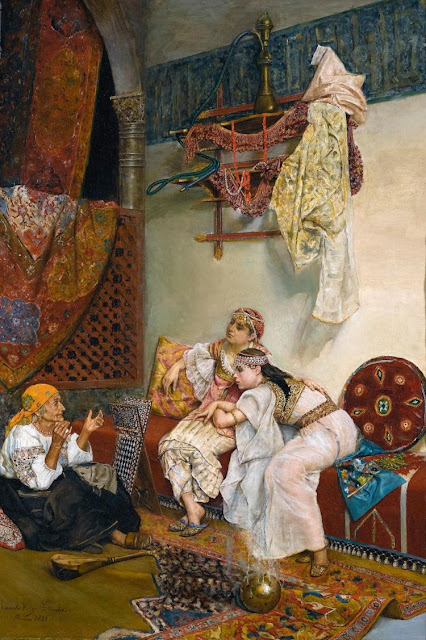 Ricardo Villegas Cordero ( Seville , 1849 - 1896 ) was a Spanish painter. He was the brother of painter Jose Villegas Cordero , better known than he. 2 He drowned in the river Guadalquivir , after falling from the boat where he traveled. 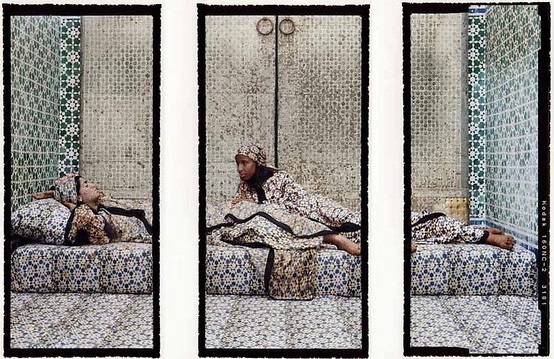 In her series Harem, Essaydi refers to the dangerous nature of the harem, contrasting the idealistic setting that Western artists previously depicted. The artist places her figures within the Moroccan Palace Dar El Basha and dresses them in patterns similar to the palace’s mosaics, wood carvings and stained glass. By camouflaging the women’s bodies into the background, Essaydi illustrates how women seemingly appear as another piece of décor in the room. To counter societal norms, Essaydi utilizes calligraphy and applies henna to adorn the female bodies. The text is not necessarily meant to be read or understood, but rather alludes symbolically to the restrictions faced by women in today’s societies and how they find their voice despite all imposed restrictions. Through the perspective of an Arab woman living in a Western world, Lalla Essaydi redefines Arab female identity. More on Lalla Essaydi 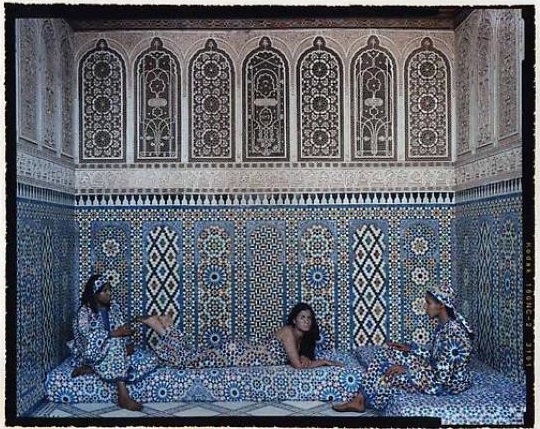 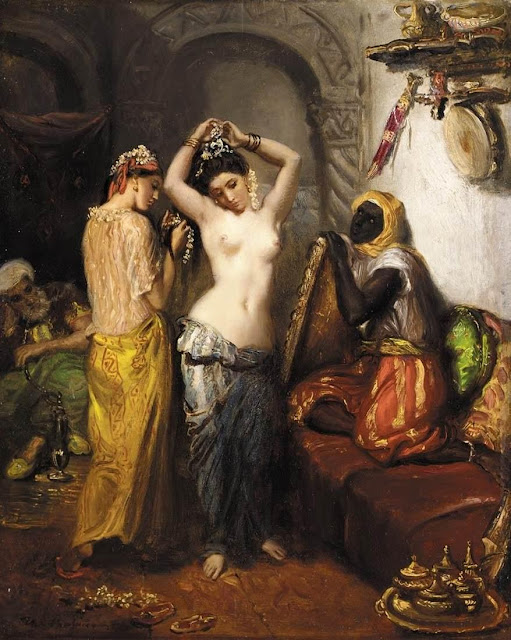 Théodore Chassériau (September 20, 1819 – October 8, 1856) was a French Romantic painter noted for his portraits, historical and religious paintings, allegorical murals, and Orientalist images inspired by his travels to Algeria.

Chassériau was born in El Limón, Samaná, in the Spanish colony of Santo Domingo (now the Dominican Republic). In December 1820 the family left Santo Domingo for Paris, where the young Chassériau soon showed precocious drawing skills. He was accepted into the studio of Jean-Auguste-Dominique Ingres in 1830, at the age of eleven, and became the favorite pupil of the great classicist, who regarded him as his truest disciple.

After Ingres left Paris in 1834 to become director of the French Academy in Rome, Chassériau fell under the influence of Eugène Delacroix, whose brand of painterly colorism was anathema to Ingres. Chassériau's art has often been characterized as an attempt to reconcile the classicism of Ingres with the romanticism of Delacroix. He first exhibited at the Paris Salon in 1836, and was awarded a third-place medal in the category of history painting. In 1840 Chassériau travelled to Rome and met with Ingres, whose bitterness at the direction his student's work was taking led to a decisive break.

In 1846 Chassériau made his first trip to Algeria. From sketches made on this and subsequent trips he painted such subjects as Arab Chiefs Visiting Their Vassals and Jewish Women on a Balcony...

After a period of ill health, exacerbated by his exhausting work on commissions for murals to decorate the Churches of Saint-Roch and Saint-Philippe-du-Roule, Chassériau died at the age of 37 in Paris, on October 8, 1856. More on Théodore Chassériau