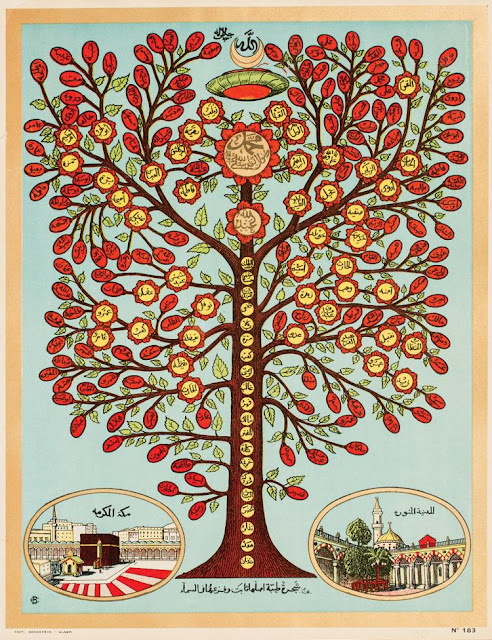 Lithograph depicting the family tree of Prophet Muhammad. With two windows on either side of the tree depicting holy scenes of Ka'aba and the tomb and mosque of the Prophet. 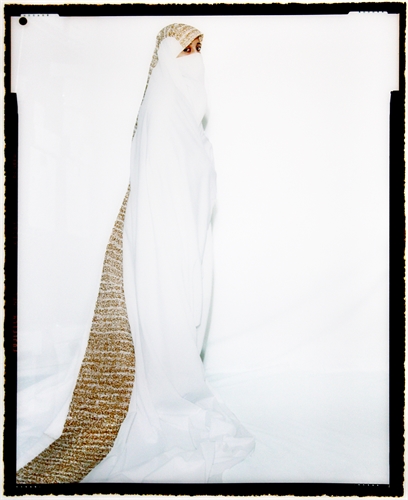 Lalla Essaydi’s (Moroccan, b. 1956) work delves into the complexity of identity and is deeply influenced by her personal experiences. Blending Western aesthetic with Orientalist imagery, she works in a variety of mediums. Essaydi’s work is included in the permanent collections of the Louvre, Paris, France; the Chicago Art Institute; the National Gallery of Art, Washington, D.C.; the Los  Angeles County Museum of Art; among others. More Lalla Essaydi 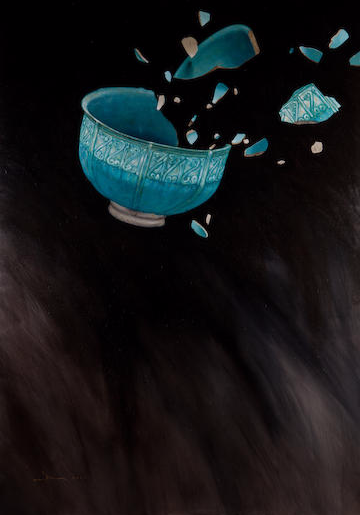 Aydin Aghdashloo (born October 30, 1940) is an Iranian painter, graphist, writer, film critic and one of the known artists of Iranian modern and contemporary art. His art works are known for showing the thought of gradual death and doom and also recreating remarkable classic works in a modern and surreal form. His two series Termination Memories and Years of Fire and Snow (below) are considered part of the most important series of modern Iranian art. 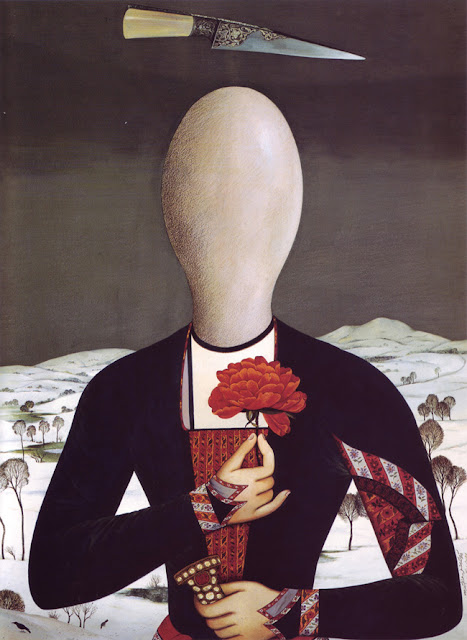 Aghdashloo began designing, graphics and painting since adolescence and became the painter of Iranian textbooks, magazines and private institutions in youth. For a while, he directed the cultural and artistic affairs of "Special Office of Queen Farah Pahlavi" and helped collecting Iranian and global artworks. He was also involved in launching Tehran Museum of Contemporary Art and Reza Abbasi Museum, and directed the latter for a while. After the revolution, Aghdashloo is considered one of the most famous painting masters for the third generation modern Iranian painters. More on Aydin Aghdashloo 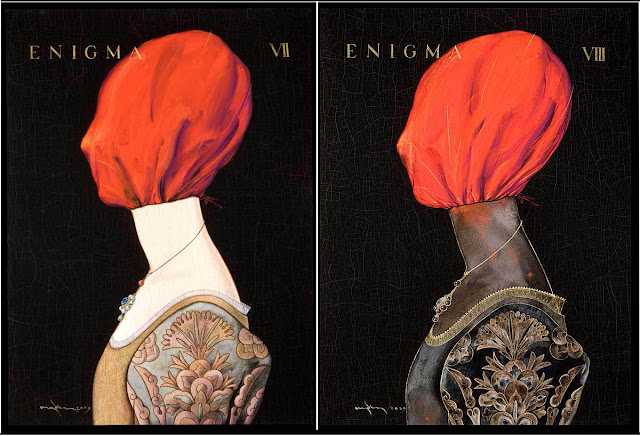 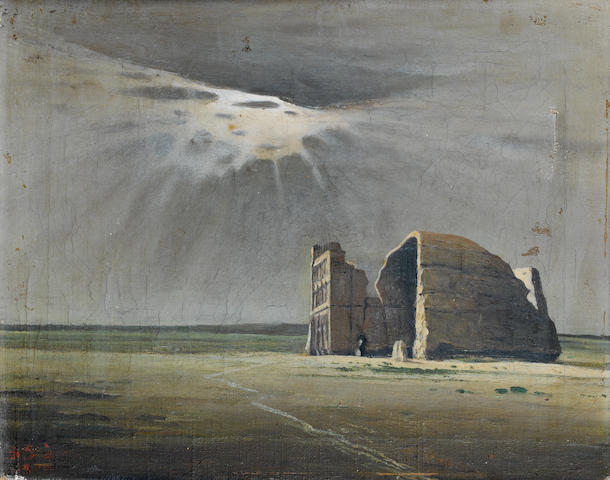 The Taq-i Kisra is the only remaining visible structure found in the ancient city of Ctesiphon and was constructed during the reign of the Persian King Khosrau I around 540 A.D. The arch was part of the Imperial palace complex and was the largest to be built in the Persian Empire, standing thirty meters high.

Ctesiphon was located on the east bank of the river Tigris, around 35km south of the Iraqi capital Baghdad and functioned as the capital of both the Parthian and Sassanian Empires before being abandoned around the 8th century. More on Taq-i Kisra 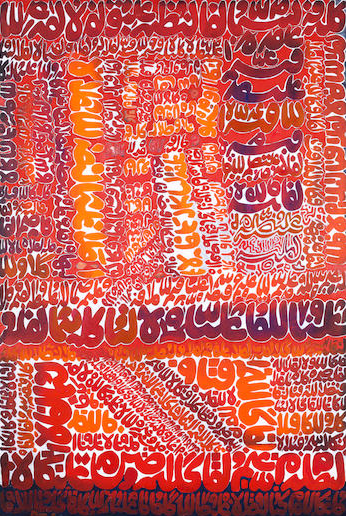 Michel Tapié was an important critic in the post-war French art scene. In 1952 he introduced a key concept, that of L'Art Autre (other art), in which he explained that over and above representation, one has to change one's value system in order to appreciate art.

This was Tapié's discovery of the Iranian avant-garde of which Zenderoudi was at the forefront. The encounter was significant to the extent that Tapié became Zenderoudi's advisor between 1971 and 1975, "La Maison de l'Iran", Galerie Cyrus. For Tapié, Middle Eastern calligraphy had an abstract power which offered 'abstract spaces', making it a striking art form during these years of turbulence in aesthetics. In this turbulence he saw not a break but a continuity with the past in the midst of the ever-changing values of the present day. More on this work

Charles Hossein Zenderoudi (born 1937 Tehran) is an Iranian painter and sculptor, known especially as a pioneer of Iranian modern art.

Zenderoudi went to the College of Fine Arts and the College of Decorative Arts in Tehran and has had work exhibited in various parts of the world including Paris (1959-1563), Tehran (1960-1966), Sao Paulo (1963), and Venice (1964). The influence of Iranian Shi'ite folk art was seen in his exhibition at the Third Tehrān Biennale; the works were made up of geometric shapes and decorated with calligraphy. In fact, the term Saqqakhana was first used by the Iranian critic Karim Emami to describe Zenderoudi's art. Zenderoudi's interest in calligraphy was developed further in his works of the late 1960s and 1970s. More on Charles Hossein Zenderoudi 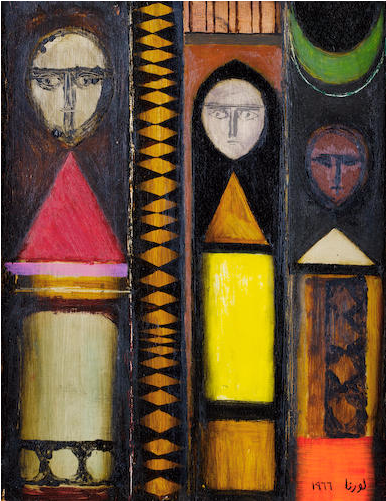 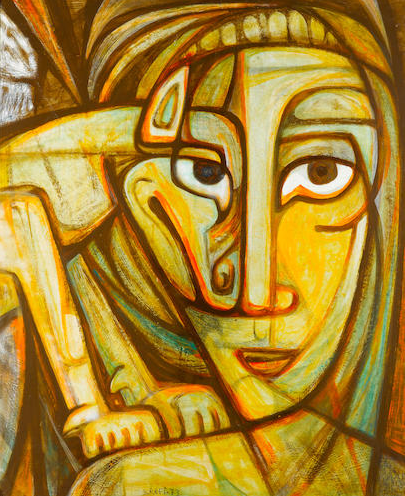 Samir Rafi's  (Egypt, 1926-2004) talent was discovered early on in his life which prompted his teacher Hussein Youssef Amin, the founder of the 'Group of Contemporary Arts', to organize the artist's first exhibition in 1943. A work from this exhibition was acquired by the Art Museum of the Ministry of Education. Rafi continued his education and graduated from the Faculty of Fine Arts, Cairo in 1948.

In the late 1940s Rafi joined Amin's Group of Contemporary Arts. The artistic objective of the members was to employ authentic Egyptian traditions in their art by applying popular symbols and philosophy, in order to counter imported and Orientalist trends, thus producing an indigenous form of contemporary art. Rafi's works of the 1950's were described as fresh, vibrant and daring.

Unlike his contemporaries, Rafi's works do not include elements of traditional Egyptian culture and symbology. Most of his work revolves around the relationships between men and women in a cosmopolitan environment.


Throughout his career Rafi repeated the subject matter of the woman figure with a wolf which was intended to symbolize unfaithfulness. Many of his paintings reflected an angry and serious theme. In the current work he has chosen to merge the faces of the wolf and the woman in a very distinct surrealist style. More on Samir Rafi's 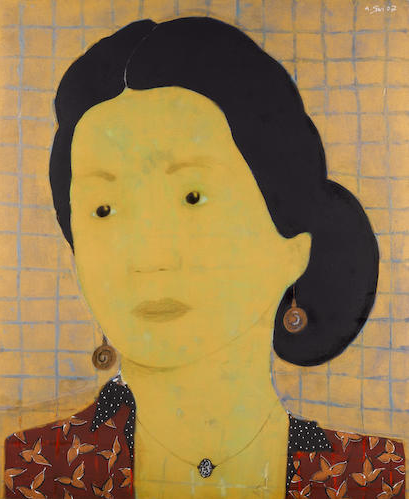 Umm Kulthum (December 31, 1898, or May 4, 1904, died February 3, 1975) was an internationally famous Egyptian singer, songwriter, and film actress active from the 1920s to the 1970s. She was given the honorific title Kawkab al-Sharq ("Star of the East"). Known for her extraordinary vocal ability and style, Umm Kulthum was one of the greatest and most influential Arab singers of the 20th century. She has sold over 80 million records worldwide. More no Umm Kulthum

Adel El Siwi born in 1952 in Beheira, Egypt. He studied medicine at Cairo University between 1970 and 1976, but simultaneously indulged in independent study at the faculty of fine arts between 1974 and 1975. In 1980 he relocated to Milan in Italy, where he lived and worked for a decade before moving back to Cairo, where he continues to live and work.
His work has been included in a number of group exhibitions. He was invited by “Le Laboratoire: Sculpture Urbaine” to project his work onto historical buildings in Rio de Janeiro, Brazil (1996), Grenoble, France (2000), Alger, Algeria, (2003).

In addition to his career as a visual artist, El Siwi has translated numerous art historical texts into Arabic by artists such as Leonardo da Vinci and Paul Klee. More on Adel El Siwi 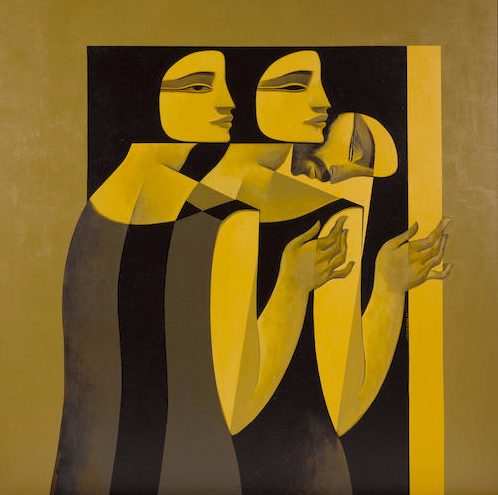 Safwan Dahoul, born in 1961 in Hama, Syria, Dahoul was initially trained by leading modernists at the Faculty of Fine Arts, University of Damascus before travelling to Belgium, where he earned a doctorate from the Higher Institute of Plastic Arts in Mons. Upon returning to Syria, he began teaching at the Faculty of Fine Arts and was a prominent member of the Damascus art scene. In the span of a decade, Dahoul nurtured a new generation of artists as an active mentor whose evolving aesthetic often ignited new directions in painting. Given the trajectory and status of his painting style, Dahoul’s career is regarded as a crucial link between modern and contemporary Arab art.

Since the late 1980s, Dahoul’s ongoing Dream series has explored the physical and psychological effects of alienation, solitude, and longing that punctuate the human experience at various stages in life. Partly autobiographical, this seminal body of work uses the formal properties of painting to recreate the subconscious sense of enclosure that surfaces during times of crisis. The artist’s recurring female protagonist facilitates this visceral experience through her contorted body, often-vacant eyes, and minimised yet monumental physicality. Depicted in the confinement of ambiguous settings, her presence is defined by the placement of various objects that seem to deepen the state of her disaffection, as even the familiar becomes a trigger of distress. More on Safwan Dahoul 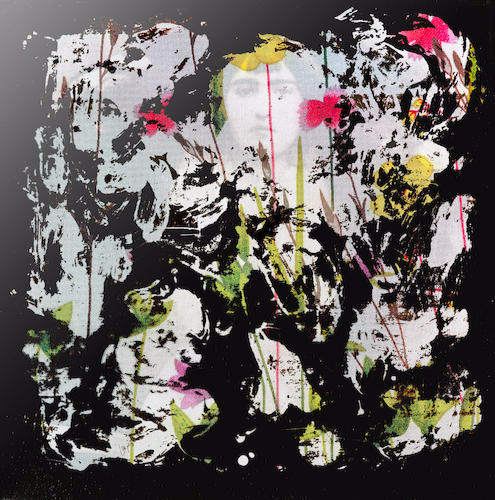 Jalali graduated with a degree in Economics from Melli University in Tehran, then started his career as a photographer in 1972. In 1974 he joined the Royal Photographic Society in Great Britain. He is best known for his documentary photographs from the Iranian Revolution in 1979 and from the Iran-Iraq war, but after the revolution he focused more on teaching photography at Iranian universities than practicing it. Jalali was a founding member and curator at the Museum of Photography in Tehran. 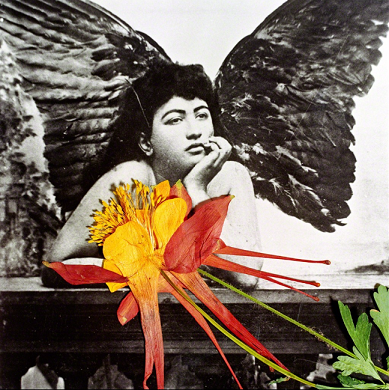 His last work was a photo series called "Image of Imaginations" (above), which took three years (2003–2006) for him to complete. The Museum of Fine Arts in Nantes bought this photo series for their collection.

Jalali was given a special homage for his forty-year career in photography by the Fundació Antoni Tàpies in Barcelona. He was a contributor to the exhibition in the British Museum, London, "Word into Art : Artists of the Modern Middle East" in 2006.

Until the end of his life, Jalali was a member of the editorial board for Aksnameh, a bi-monthly journal of photography in Tehran.

The veteran photographer was being treated for pancreatic cancer in Germany. He returned to his home in Tehran on 14 January 2010 and died the next morning at the age of 65. More on Bahman Jalali