08 Orientalist Paintings by Artists from the 19th Century, with footnotes, 18

Orientalism is a term that is used for the depiction of aspects in Middle Eastern cultures. It refers to the works of the Western artists on Oriental subjects, produced from their travels in Western Asia, during the 19th century. Depictions of Islamic "Moors" and "Turks" can be found in Medieval, Renaissance, and Baroque art. A creative apprehension of a completely different world with its own laws, customs, special attitude towards life and death, love, feelings, and beauty. Wikipedia/Yana Naumovna Lukashevskaya 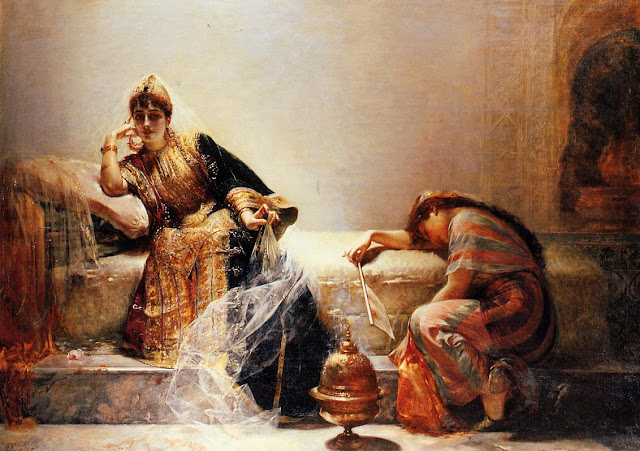 Scheherazade is a character and the storyteller in One Thousand and One Nights. This book includes the tales of Aladdin, Ali Baba and many more.

The story goes that Shahryar found out one day that his first wife was unfaithful to him. Therefore, he resolved to marry a new virgin each day as well as behead the previous day's wife, so that she would have no chance to be unfaithful to him. He had killed 1,000 such women by the time he was introduced to Scheherazade, the vizier's daughter.

"Scheherazade had perused the books, annals and legends of preceding Kings, and the stories, examples and instances of bygone men and things; indeed it was said that she had collected a thousand books of histories relating to antique races and departed rulers. She had perused the works of the poets and knew them by heart; she had studied philosophy and the sciences, arts and accomplishments; and she was pleasant and polite, wise and witty, well read and well bred." 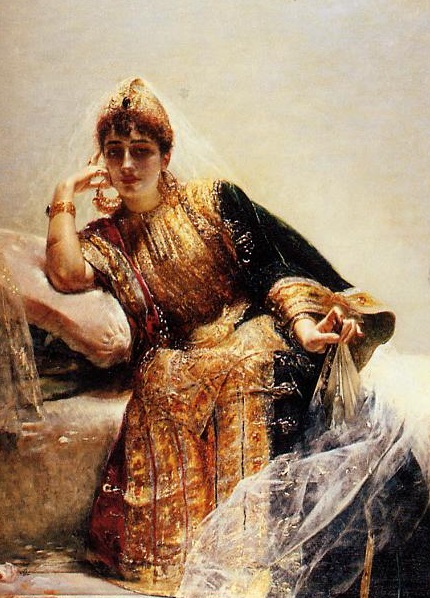 Against her father's wishes, Scheherazade volunteered to spend one night with the king. Once in the king's chambers, Scheherazade asked if she might bid one last farewell to her beloved sister, Dunyazade, who had secretly been prepared to ask Scheherazade to tell a story during the long night. The king lay awake and listened with awe as Scheherazade told her first story. The night passed by, and Scheherazade stopped in the middle of the story. The king asked her to finish, but Scheherazade said there was no time, as dawn was breaking. So, the king spared her life for one day to finish the story the next night. The following night, Scheherazade finished the story and then began a second, even more exciting tale, which she again stopped halfway through at dawn. Again, the king spared her life for one more day so she could finish the second story.

And so the king kept Scheherazade alive day by day, as he eagerly anticipated the finishing of the previous night's story. At the end of 1,001 nights, and 1,000 stories, Scheherazade told the king that she had no more tales to tell him. During these 1,001 nights, the king had fallen in love with Scheherazade. He spared her life, and made her his queen. More on Scheherazade

Édouard Frédéric Wilhelm Richter , born on June 18, 1844 in Paris, where he died on March 4, 1913 to a Dutch mother and German father. His extensive artistic education took him to the Hague Academy, then to Antwerp and finally to the Académie de Beaux-Arts in Paris where he trained under Léon Bonnat. Richter first exhibited a still-life at the Salon in 1866 and received honourable mention. However for the following fifty years, he submitted a range of subject matter including portraits, historical genre scenes and more specifically Orientalist subjects.

Richter's favourite subject was the female. Whether European or Middle Eastern, he illustrated dignified, yet languid beauties at the centre of his compositions. His Orientalist subjects demonstrate a certain studied theatricality in the gesture of the figures and the composition as seen in the present lot, as well as an exquisite handling of the textures and colours. The young woman dressed in elaborate clothes is posed in front of a window. The sunlight defines the silhouette of body and adds an ethereal halo. The delicacy of her placed fingers and the soft pink in her dress contrasts with the geometric and vibrant design of the mosaics encircling her. More on Édouard Frédéric Wilhelm Richter 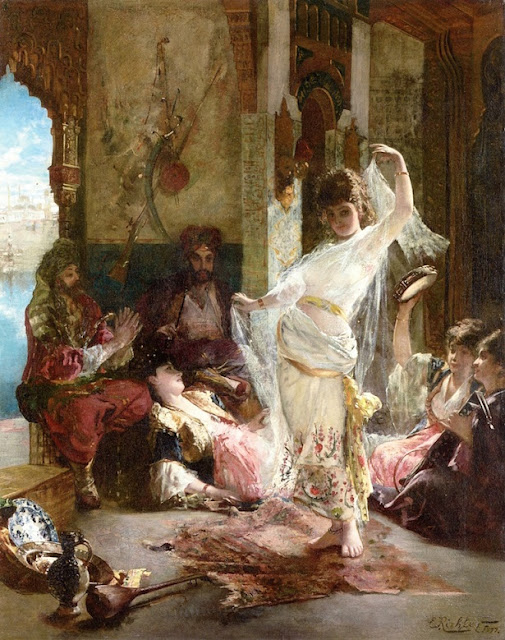 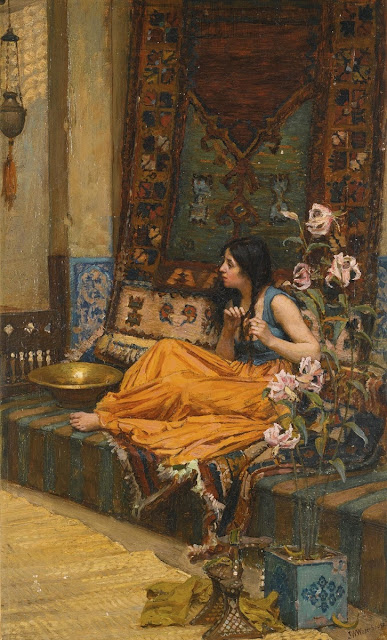 John William Waterhouse (April 6, 1849 – February 10, 1917) was an English painter known for working in the Pre-Raphaelite style. He worked several decades after the breakup of the Pre-Raphaelite Brotherhood, which had seen its heyday in the mid-nineteenth century, leading to his sobriquet "the modern Pre-Raphaelite". Borrowing stylistic influences not only from the earlier Pre-Raphaelites but also from his contemporaries, the Impressionists, his artworks were known for their depictions of women from both ancient Greek mythology and Arthurian legend.
Born in Italy to English parents who were both painters, he later moved to London, where he enrolled in the Royal Academy of Art. He soon began exhibiting at their annual summer exhibitions, focusing on the creation of large canvas works depicting scenes from the daily life and mythology of ancient Greece. Later on in his career he came to embrace the Pre-Raphaelite style of painting despite the fact that it had gone out of fashion in the British art scene several decades before. More on John William Waterhouse 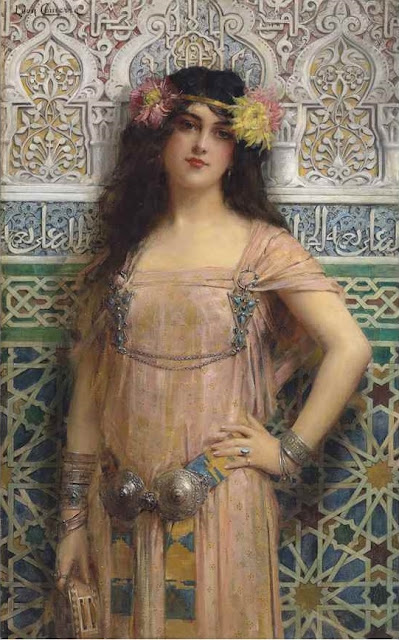 Léon François Comerre (10 October 1850 – 20 February 1916) was a French academic painter, famous for his portraits of beautiful women. Comerre was born in Trélon, in the Département du Nord, the son of a schoolteacher. He moved to Lille with his family in 1853. From an early age he showed an interest in art and became a student of Alphonse Colas at the École des Beaux-Arts in Lille, winning a gold medal in 1867. From 1868 a grant from the Département du Nord allowed him to continue his studies in Paris at the famous École nationale supérieure des Beaux-Arts in the studio of Alexandre Cabanel. There he came under the influence of orientalism. 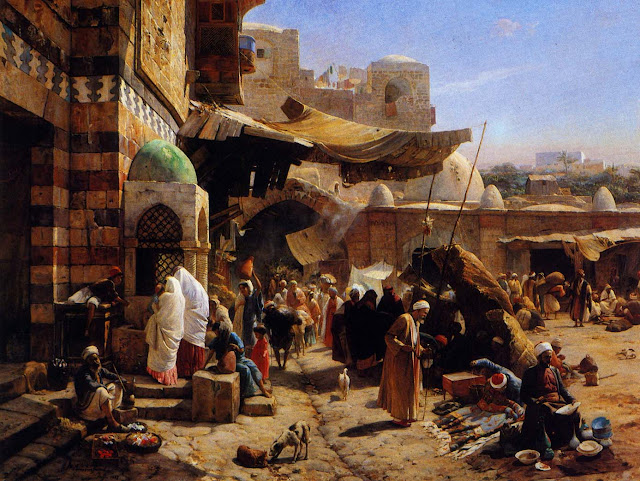 Market in Jaffa, now a part of Tel Aviv, was painted by Gustav Bauernfeind in 1887. Bauernfeind was extremely brave to paint in cities like Jaffa and Damascus. Jaffa was frequently under quarantine for plague and westerners could be attacked in the streets of Damascus by religious zealots. Bauernfeind would show up in these cities in western dress with bulky photographic equipment and somehow survive and get his work done. More on Market in Jaffa

Gustav Bauernfeind (4 September 1848, Sulz am Neckar - 24 December 1904, Jerusalem) was a German painter, illustrator and architect. He is considered to be one of the most notable Orientalist painters of Germany.

After completing his architectural studies in Stuttgart, he worked in the architectural firm of Professor Wilhelm Bäumer and later in that of Adolph Gnauth, where he also learned painting. In his earlier paintings, Bauernfeind focused on local views of Germany, as well as motifs from Italy. During his journey to the Levant from 1880 to 1882, he became interested in the Orient and repeated his travels again and again. In 1896 he moved with his wife and son all the way to Palestine and subsequently settled in Jerusalem in 1898. He also lived and worked in Lebanon and Syria. 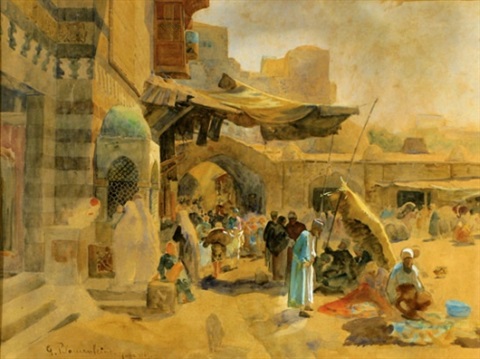 His work is characterized primarily by architectural views of Jerusalem and the Holy Land. The paintings of Bauernfeind are mostly meticulously crafted, intricately composed and almost photographically accurate cityscapes and images of known sanctuaries in oil. In addition, he produced landscape scenes and watercolours. During his lifetime he was the most popular Orientalist painter of Germany, but soon fell into oblivion after his death. However, since the early 1980s, Bauernfeind was gradually rediscovered. At his birthplace in Sulz am Neckar, the life and work of the painter is commemorated by the Gustav Bauernfeind Museum with a large permanent exhibition. More Gustav Bauernfeind 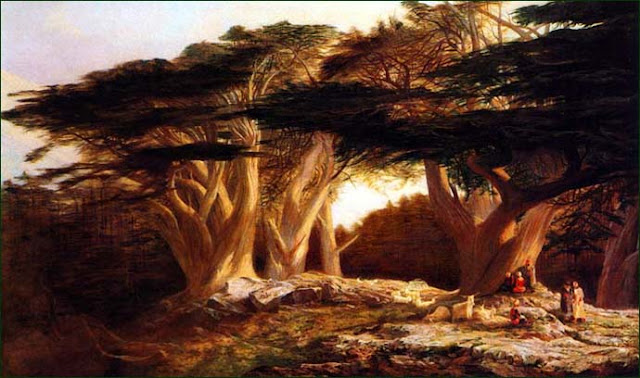 The cedar of Lebanon was prized throughout the ancient Near East. The Palermo Stone indicates cedar was imported to Egypt in the reign of the 4th dynasty king Sneferu, ca. 2613-2589 BC. One of its primary uses was for boat construction.

Commonly referred to in Scripture as the cedars of Lebanon, this aromatic, durable wood was highly desirable for building in Iron Age Israel. David used in it building his palace, and Solomon used it in the construction of the temple and a palace for himself. More history of the Cedars of Lebanon. 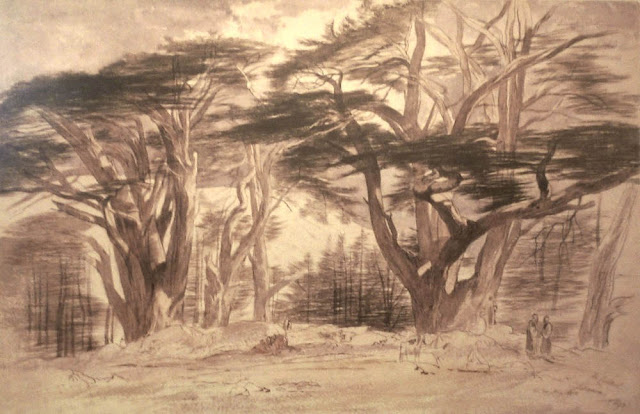 Edward Lear, 1812-1888
The Cedars of Lebanon, c. 1858
A preliminary sketch for the painting (above)
Oatlands Park Hotel, Weybridge

Although Lear had travelled in the Middle East, and indeed undertook his most extensive tour there in 1858, his time was limited. As in the case of other pictures, he found he still needed a more leisurely contemplation in order to work up his landscapes: "Individual foreground details and studies of foliage were often painted from local sources". Thus, to complete a view of the Cedars of Lebanon that had so impressed him, he went looking for good specimens when home again in England. Fortunately, some such specimens were to be found within easy reach of London. Lear could hardly have done better than the ancient and famous cedar trees on the estate of the Oatlands Park Hotel in north Surrey. The most imposing one now has a sign on it, that reads, "This is one of the first Cedars of Lebanon imported into England. It is believed to have been planted here by Prince Henry Otelands, the youngest son of King Charles the First." More on The Cedars of Lebanon