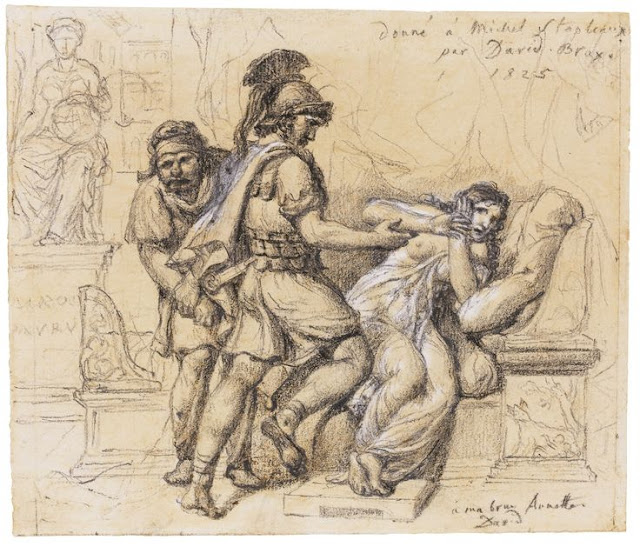 In an armed camp outside Rome, Tarquinius, Collatinus and Junius are drinking together. The previous night, a group of soldiers rode home unexpectedly to Rome to check on their wives, all of whom were caught betraying their husbands, with the single exception of Collatinus' wife Lucretia. Junius, whose wife was among the faithless majority, goads young Tarquinius, the king's son, into testing Lucretia's chastity himself. The impulsive prince calls for his horse and gallops off to the city alone.

At Collatinus' house in Rome, Lucretia is patiently spinning with her servants Bianca and Lucia. She longs for her absent husband. As the women prepare for bed, there is a knock at the door: Tarquinius. Though fearful, they cannot refuse to offer the prince hospitality.

As Lucretia sleeps, Tarquinius creeps into her bedroom and awakens her with a kiss. She begs him to go, but certain that she desires him, he rapes her.


The following morning, Lucia and Bianca are glad to discover that Tarquinius has already left the house. Lucretia enters, calm but obviously devastated. She sends a messenger asking Collatinus to come home. Bianca tries to stop the messenger, but Collatinus arrives at once (accompanied by Junius). He comforts his wife lovingly, but she feels that she will never be clean again. She stabs herself and dies. All mourn. Junius plans to use this crime by the prince to spark a rebellion against the king. More 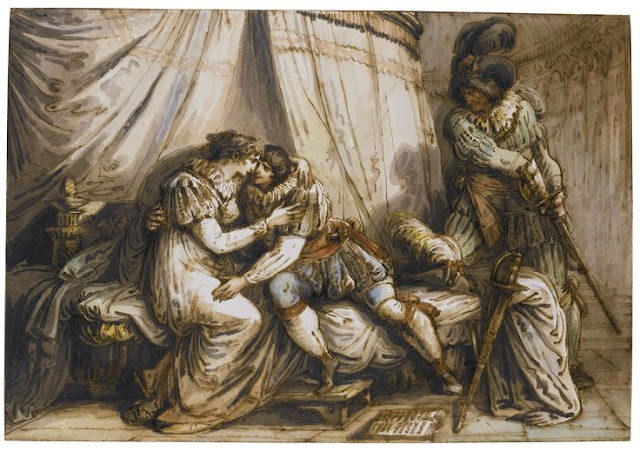 Giovanni Malatesta (died 1304), known, from his lameness, was the eldest son of Malatesta da Verucchio of Rimini.


From 1275 onwards he played an active part in the Romagnole Wars and factions. He is chiefly famous for the domestic tragedy of 1285, recorded in Dante's Inferno, when, having detected his wife, Francesca da Polenta (Francesca da Rimini), in adultery with his brother Paolo, he killed them both with his own hands. More 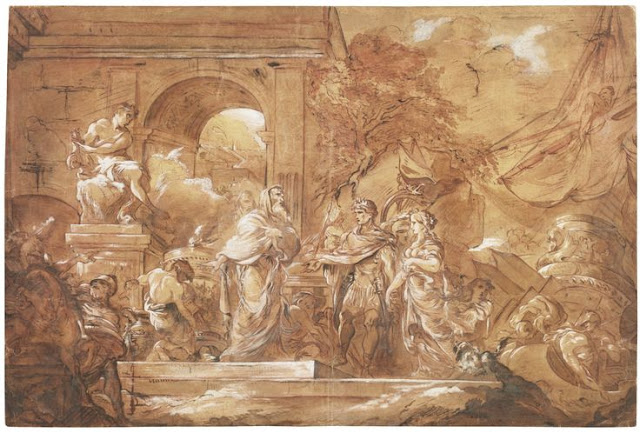 Circle of Charles-Joseph Natoire
THE BETROTHAL OF THEAGENES AND CHARICLEA
Pen and brown ink and wash over red chalk, heightened with white
462 by 695 mm

Chariclea, the daughter of King Hydaspes and Queen Persinna of Ethiopia, was born white because her mother gazed upon a painting of the naked Andromeda just after her rescue by Perseus while Chariclea was being conceived. Fearing accusations of adultery, Persinna gives her baby daughter to the care of Sisimithras, a gymnosophist, who takes the baby to Egypt and places her in the care of Charicles, a Pythian priest. Chariclea is then taken to Delphi, and made a priestess of Artemis. Theagenes, a noble Thessalian, comes to Delphi and the two fall in love. He runs off with Chariclea with the help of Calasiris, an Egyptian who has been employed by Persinna to find Chariclea. They encounter many perils: pirates, bandits, and others. The main characters ultimately meet at Meroe at the very moment when Chariclea is about to be sacrificed to the gods by her own father. Her birth is made known, and the lovers are happily married. 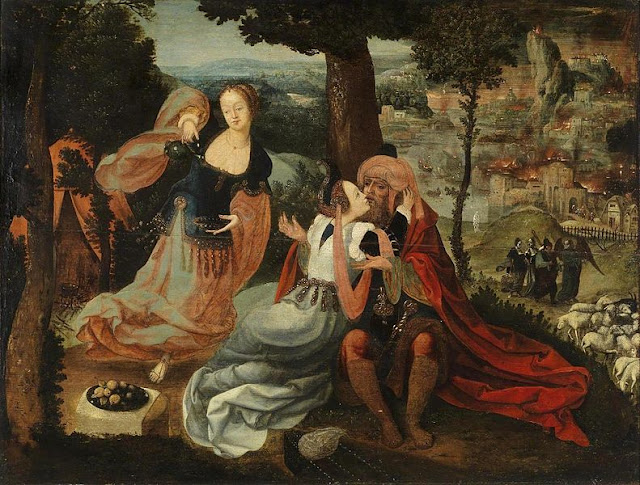 Lot is a person mentioned in the biblical Book of Genesis chapters 11–14 and 19. Notable episodes in his life include his travels with his uncle Abram (Abraham), his flight from the destruction of Sodom and Gomorrah, during which Lot's wife became a pillar of salt, and the seduction by his daughters so that they could bear children. More

Jan Wellens de Cock (c. 1480 – 1527) was a Flemish painter and draftsman of the Northern Renaissance. He was probably born in Leiden in Holland but settled in Antwerp. In 1506 Jan is recorded in the archives of the Guild of Saint Luke in Antwerp as having accepted an apprentice called 'Loduwyck'. On 6 August 1502 Jan Wellens de Cock married Clara, the daughter of Peter van Beeringen. Jan Wellens de Cock was probably identical to the 'Jan de Cock' that worked as a servant to the guild of 'Onze-Lieve-Vrouw Lof' for which he executed many commissions over the next few years. In 1507 de Cock was paid for painting angels and restoring the Holy Ghost at the altar of this guild in Antwerp Cathedral. These works were probably lost in the "beeldenstorm" of 1566. In 1511 the guild paid de Cock for cutting a woodblock for a print to use in the guild's procession. This is the only indication that de Cock, to whom several prints have been attributed, was indeed active as a block cutter. More
Posted by Henry Zaidan at 11:33 AM