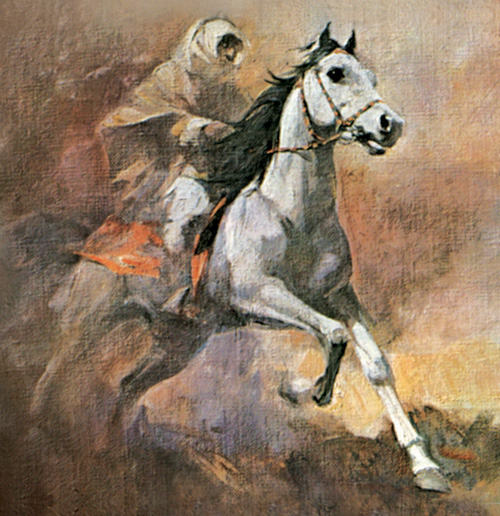 Faeq Hassan (1914–1992) was an Iraqi painter noted for founding several 20th century art groups, which collectively were responsible for bridging the gap between Iraqi heritage and traditional art and modern art. He is often called the 'father of Iraqi modern art.'

Hassan was born in Baghdad in 1914 His father had died before Hassan was born. As a child, he helped his mother who made folkloric clay statues of Arab Bedouins and local farmers. As a young boy, he visited his uncle who was working as a gardener for King Faisal I where the King saw the boy drawing a horse. Recognising his talent, the King promised to give the young artist a scholarship. However, the King died in 1933 before he could carry out his promise.

During the early 1930s, Hassan gave art lessons at a local school, and when the new King Faisal II visited his school, he ordered that Hassan be sent to Paris to study art, thus fulfilling his father's earlier promise to the young boy. He graduated from the École des Beaux-Arts, Paris in 1938. Hassan was one a very small group of artists sent to study abroad. On their return to Iraq, this group became the cornerstone of modern art in Iraq.[4]

On his return to Baghdad, Hassan founded the Painting Department at the Fine Arts Institute in 1939-1940. He also founded the Al-Ruwad (The Pioneers Group), in the 1930s . The group attempted to incorporate local phenomena into art. They rejected the artificial atmosphere of the artist’s studio and encouraged artists to engage with nature and traditional Iraqi life and held their first exhibition in 1931. This group was responsible for taking the first steps towards bridging the gap between modernity and heritage.

For most of his working life, he was a member of the Iraqi Artists' Society. He died in 1992 from heart failure. More on Faeq Hassan