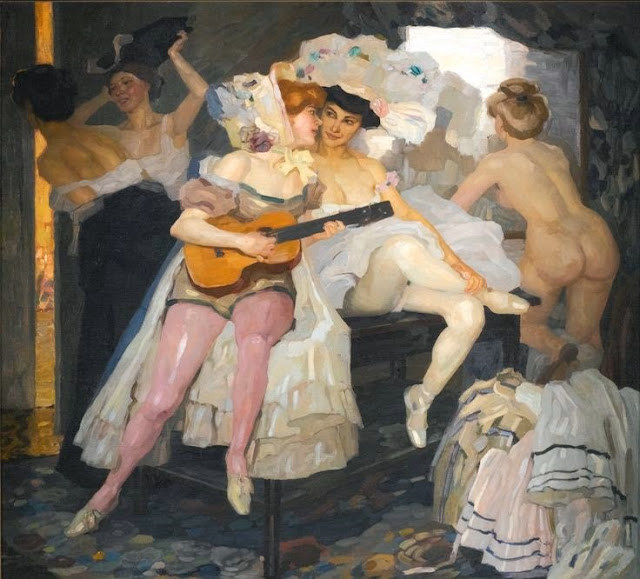 Inspired by his stay in Paris, Backstage is a masterful evocation of the French capital's demi-monde that was the source of fascination to so many painters, most famously Toulouse Lautrec. Putz would have frequented Pigalle's many cabarets and café concerts, including the Moulin Rouge, Moulin de la Galette and the Folies Bergère, which were synonymous with the dancers like La Goulue (Louise Weber) and Jane Avril who performed there. More on this painting

Leo Putz (18 June 1869, in Merano – 21 July 1940, in Merano) was a Tyrolean painter. His work encompasses Art Nouveau, Impressionism and the beginnings of Expressionism. Figures, nudes and landscapes are his predominant subjects.
He began his studies at the age of sixteen at the Academy of Fine Arts Munich. His father then sent him to the Académie Julian in Paris. After military service, he returned to Munich and studied with Paul Hoecker. He opened his first studio in 1897. That same year, he became a member of the Munich Secession. He worked with the weekly magazine Jugend and many of his paintings were reproduced on the magazine's title page. During this time, he also worked as a commercial artist, creating many posters in Art Nouveau style and billboards for the Moderne Galerie München.
He became an honorary citizen of Bavaria in 1909; a prerequisite for becoming a Professor, which appointment he received that same year. Between 1909 and 1914, he spent his summers at Schloss Hartmannsberg near Chiemgau to practice plein-air painting. It was there that he created his best-known works; the two series known as the "Boat Pictures" and the "Bathers".
He accepted an invitation to move to Brazil in 1929. At the request of Lúcio Costa, he took a professorship at the Escola Nacional de Belas Artes in 1931. During his stay, his colors took on a more tropical flavor and the exotic plant life became a favorite subject. He returned to Germany in 1933.
He became an opponent of National Socialism and his art was labelled "degenerate". Beginning in 1936, he was repeatedly interrogated by the Gestapo and was forced to flee back to his native region, the South Tyrol. In 1937, he was officially banned from working in Germany. For the remainder of his life, he concentrated on painting castles, villages and benign landscapes.
He died in 1940. More on Leo Putz