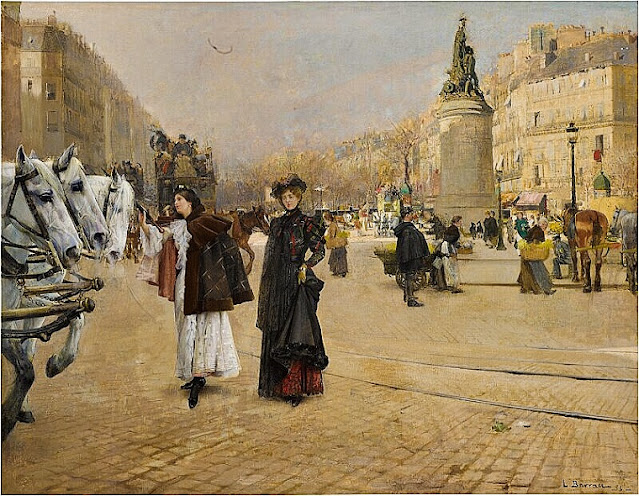 Laureano Barrau Buñol, Spanish, 1863 - 1957
Sur la place de Clichy, c. 1893
Oil on canvas
35½ by 46 in.; 90.2 by 116.8 cm
Private collection
The Place de Clichy, also known as "Place Clichy", is situated in the northwestern quadrant of Paris. It is formed by the intersection of the Boulevard de Clichy, the Avenue Clichy, the Rue Clichy, the Boulevard des Batignolles, and the Rue d'Amsterdam.
Place de Clichy, borders between the Batignolles and Montmartre neighborhoods. Though far from the city center, Montmartre was the heart of Bohemian life, brimming with dance halls, cafés-concerts, and cabarets-artistiques that attracted artists, writers, singers, and actors as well as middle-class Parisians and tourists seeking various pleasures and entertainment. More on Place de Clichy
Laureano Barrau (1863, Barcelona –1957, Santa Eulària des Riu) was a Spanish impressionist painter.

Barrau began his education in Barcelona, his native city. Later, he studied in Madrid, finding the Spanish old masters. At 20, Barrau went to Paris and enrolled at the Académie des Beaux-Arts where Gerome was his tutor. Two years later, Barrau won the Prix de Rome in Barcelona. This afforded him the opportunity to study the great Italian masters for three years.

When he was 28, Barrau was given the title of Societaire (Member) of the Salon de la Nationales des Beaux-Arts de Paris. He earned medals in the principal cities in Europe and today his paintings hang in museums in Spain, Paris, Brussels, Buenos Aires, Montevideo and Rio de Janeiro.

At age 47, Barrau moved to picturesque Ibiza. He settled with his wife in the town of Santa Eulalia del Rio where he painted what is considered his best work.