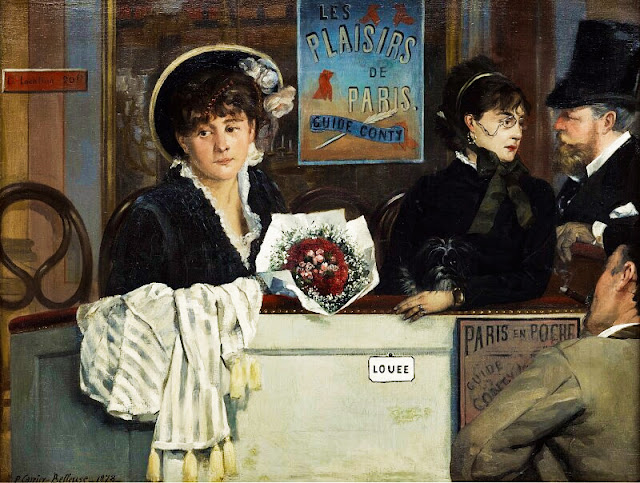 Pierre Carrier-Belleuse, French, 1851 - 1933
Les plaisirs de Paris/ The pleasures of Paris, c. 1878
Oil on canvas
19¾ by 25¾ in.; 50 by 65.5 cm
Private collection
Belle Époque Paris was a city full of pleasures. A celebrated pocket guide to the city’s newest and newsworthy haunts, aptly titled Les plaisirs de Paris (written by the journalist Alfred Delvau and first published 1867), an advertisement for which is visible at the center of the painting, promised readers entrée into la ville du plaisir et des plaisirs par excellence. This desire to see and be seen lies at the heart of Carrier-Belleuse’s clever mise-en-scène, which plays on the conceit of the gaze. Set in a box at a café-concert, the tightly packed composition and compact format recall similar scenes of spectators at the opera. More on this painting
Laureano Barrau (1863, Barcelona –1957, Santa Eulària des Riu) was a Spanish impressionist painter.

Barrau began his education in Barcelona, his native city. Later, he studied in Madrid, finding the Spanish old masters. At 20, Barrau went to Paris and enrolled at the Académie des Beaux-Arts where Gerome was his tutor. Two years later, Barrau won the Prix de Rome in Barcelona. This afforded him the opportunity to study the great Italian masters for three years.

When he was 28, Barrau was given the title of Societaire (Member) of the Salon de la Nationales des Beaux-Arts de Paris. He earned medals in the principal cities in Europe and today his paintings hang in museums in Spain, Paris, Brussels, Buenos Aires, Montevideo and Rio de Janeiro.

At age 47, Barrau moved to picturesque Ibiza. He settled with his wife in the town of Santa Eulalia del Rio where he painted what is considered his best work.