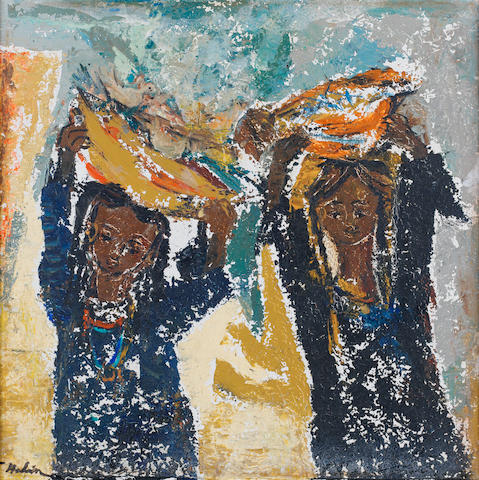 Both works by the artist were executed in the 1960s during the artist's Nubian period. Halim visited Nubia twice in the early 1960s, once with her friend and colleague Cleopatra Shahata in 1961 and again with a group of fifty academics and artists in 1962 on a trip organised by Tharwat Okasha, the then Minister for Culture and National Guidance.

Both trips were to leave lasting impressions on Halim who worked closely with the inhabitants of Nubia to document and study their ways of life, their traditions and rituals. The main reason this trip was organised was to preserve in some way the area around Aswan which was due to be flooded upon completion of the High Dam. More on these paintings 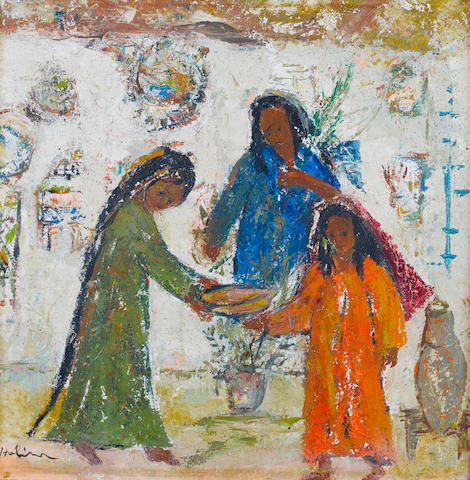 Tahia Mohammed Halim, (Egypt, 1919-2003), was an Egyptian painte, and one of the pioneers of the Modern Expressive Movement in Egyptian Art in the 1960s, where she excelled in expressing the Egyptian character’s idiosyncrasies in her works. She has many works concerning the Nile, boats and the popular and national subjects for which she has been granted several honorary awards in Egypt and abroad.

Tahia Halim was born in Sudan, where her family were living. Her primary education was inside the Royal Palace of Cairo, where she was raised, as her father was the laureate of King Fuad I of Egypt.

Tahia Halim studied art under important drawing teachers as the Lebanese painter Yussef Trabelsi and the Greek artist Gerom; then under the Egyptian artist Hamed Abdullah at his studio 1943, they married in 1945, then left for Paris to join the  Julian Academy (1949-1951). After returning to Egypt, they taught art, together, in their private studio, in Down Town (near Tahrir Square) in Cairo. Tahia Halim received two devotion scholarships of Art Production in 1960 and in 1975. More on Tahia Mohammed Halim