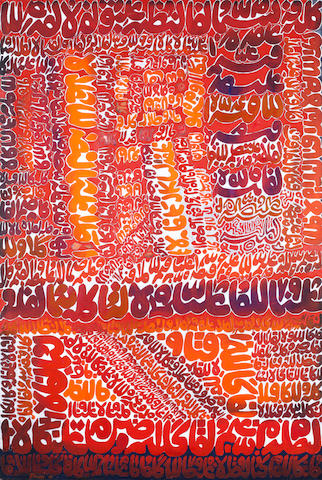 Charles Hossein Zenderoudi (born 1937 Tehran) is one of Iran's most accomplished modern artists, and as a founding father of the highly influential Saqqa Khaneh movement, has been a pioneering figurehead of Iranian neo-traditionalism.

His choice of subject matter, calligraphy, has historically been the most established mode of formal artistic expression prevalent in Iran, but, by emphasizing form over meaning, and by stripping the written word down to its aesthetic, structural, fundaments, Zenderoudi subverts the traditional values of Persian calligraphy. Zenderoudi's text is intentionally illegible and carries no literal meaning, freeing it from the constraint of linguistic limitation, and imbuing it with a sense of universality which rescues the archaic practice of calligraphy from obscurity, giving it renewed relevance in a contemporary context.

Zenderoudi's compositions pay homage to centuries of Persian religious imagery and employ a systematic repetition of letter-forms that finds its genesis in the mystical practice of Sufi numerologists, who believed in the spiritual significance of singular letters and worked these principles into hugely intricate talismanic charts. Zenderoudi's methodical compositions, whilst not accurately following the grammar or axioms of numerology, capture the aesthetic and conceptual qualities of its cryptic nature.

Works from the present series, composed in the early 1970's, mark a shift towards a more compositionally terse, technical and measured approach to calligraphy. The crowded iconography of the early works is replaced by a greater focus on larger letter-forms, which exhibit a formal refinement lacking in their earlier counterparts.

Measured but spontaneous, technical yet effuse, Zenderoudi' manipulates Persian calligraphy with effortless ease, boasting a visual scope which faithfully captures the salient elements of Iran's traditional popular religious aesthetic. Rendered with the use of rich and vibrant colours, his canvases replicate the tonal and textural qualities of the votive art so common to the Iranian urban landscape. More on Charles Hossein Zenderoudi

Please visit my other blogs: Art Collector, Mythology, Marine Art, Portrait of a Lady, and The Canals of Venice