01 Paintings by the Orientalist Artists in the Nineteenth-Century, with footnotes, 20 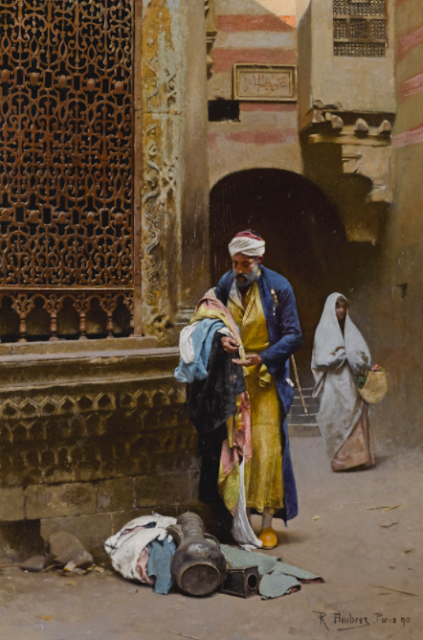 This Ottoman building built by Nafisa al-Bayda dates back to the year of 1796 AD.

Nafisa al-Bayda began her life as a slave and then was married in the mid 1700s to a man of power in the state named Ali Bey. Afterwards, she married the wealthy Murad Bey who was at first a Mamluk, but then later rose to power in 1784 and became the leader of the resistance against the Napoleon Bonaparte invasion.


Lady Nafisa al-Bayda, meaning the white one, was a woman of beauty, wealth, charity and known to be of great culture. She is also a symbol for womens participation in those days to the political life. During her husbands resistance, she played a major role in helping him acting as an intermediate between him and Napoleon. More on Nafisa al-Bayda

Born in Prague, Raphael von Ambros was a pupil of Hans Makart (1840-1884) at the famous Vienna Academy, where he would have studied alongside an extraordinary generation of Orientalist painters such as Jean Discart (French, 1856-1944), Ludwig Deutsch (1855-1935) and Rudolf Ernst (1854-1932). Like his contemporaries, Ambros found the perfect audience for his Cairo street scenes at the Paris Salon, where he exhibited from 1887. More on Raphael von Ambros