01 Paintings by the Orientalist Artists in the Nineteenth-Century, with footnotes, 21 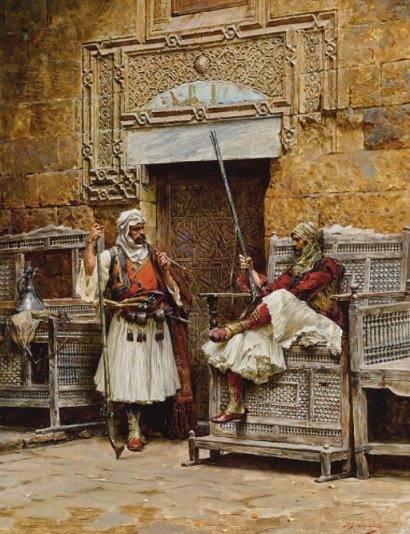 Bashi-bazouks were irregulars in the Ottoman army and hailed from lands across the Ottoman empire, from Egypt to the Balkans. The strain on the Ottoman feudal system caused by the Empire's wide expanse required heavier reliance on irregular soldiers. They were armed and maintained by the government, but did not receive pay and did not wear uniforms or distinctive badges. Because not formally trained, they could not serve in major military operations, but were useful for other tasks such as reconnaissance and outpost duty.

Both men are armed with Ottoman flintlock rifles from Algeria, and the standing guard smokes an Ottoman chibouk pipe with a tophane bowl.  More on Bashi-bazouks

Paul Joanowits, 1859 - 1957, was born in Vršac, formerly southern Hungary and today Serbia. He studied at the Vienna Academy from 1876 to 1883 under K. L.Müller. From there he sent his first painting to the art society in Budapest, earning him a Hungarian state scholarship. Like his teacher, he painted oriental images, in Vienna and later in Munich. During the late 19th century he painted scenes of the Serbian uprising for King Alexander of Serbia. Back in Vienna, his main interest lay in painting portraits, amongst which is a picture of Emperor Francis Joseph I. Joanovitch exhibited in Vienna, Munich and Berlin and today his works can be found in museums in Belgrade, Budapest, London, Munich and Vienna. More on Paul Joanowits