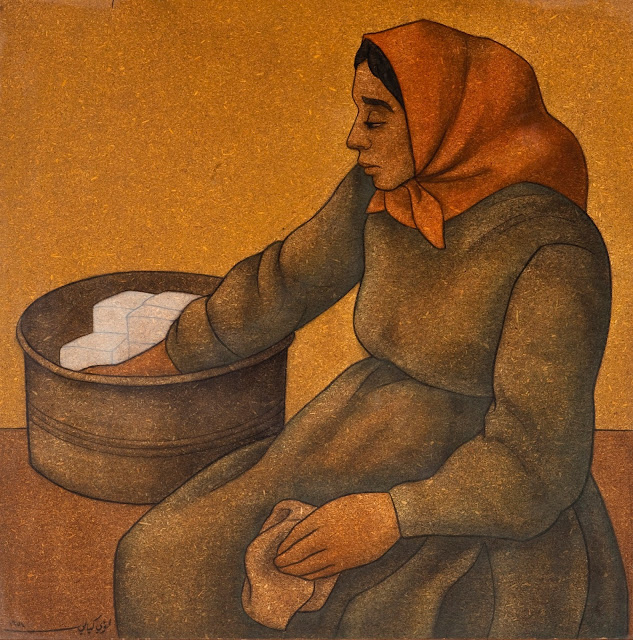 Louay Kayali, (1934–1978) was a Syrian modern artist. Kayali was born in Aleppo, Syria in 1934 and studied art in the Accademia di Belle Arti after having studied at the Al-Tajhiz School where his work was first exhibited in 1952. He met Syrian artist Wahbi Al-Hariri there and the two would share a friendship for the rest of Kayali's life. Al-Hariri would become his mentor as he was for artist Fateh Moudarres that Hariri introduced to Kayali in 1955. Moudarress and Kayali would together represent Syrian modern art at the Venice Biennial Fair. He suffered from depression and died in 1978 from burns incurred from his bed catching fire, reportedly from a cigarette. More on Louay Kayali 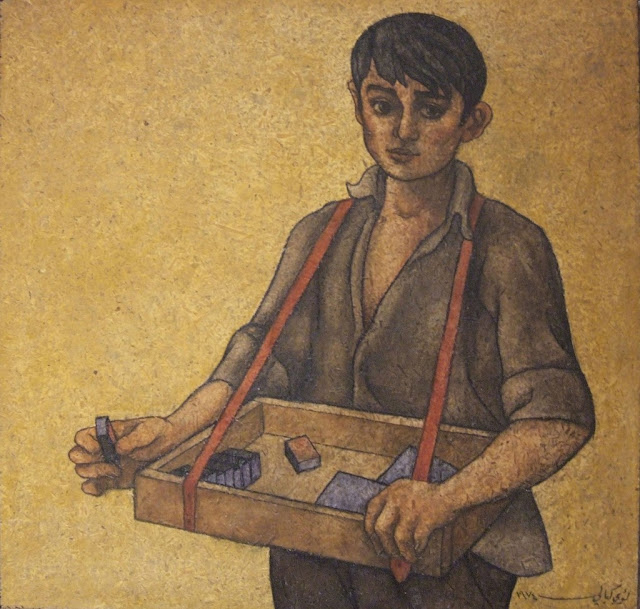 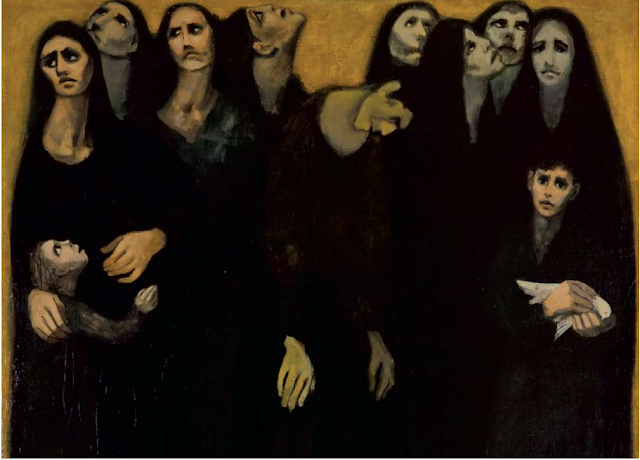 In Kayyali’s work eleven figures (seven women, two boys and one man) are crowded together as though walking in unison. With most of their gazes turned away from the viewer, they are lost in the suggested horror of their surroundings as several peer up at an invisible, looming force. In the center of the canvas is a man whose features are distorted as the artist has rendered his face with quick brush marks and few details. 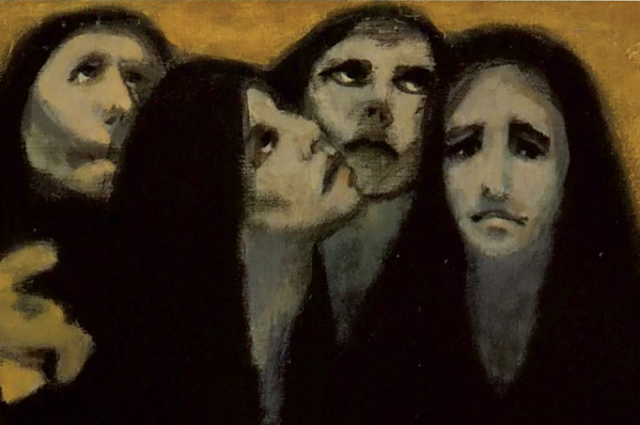 Hunched over and overpowered by an incomprehensible weight, he seems to carry the burden of mankind. His arched back, angular chin and hidden face resemble Masaccio’s Adam in “The Expulsion from Paradise” (1427). Behind him stands a female figure in profile, her head stretched far into the sky, as she beckons the heavens for reprieve and reflects the inescapable posture of a body that is overrun by grief. Kayyali has painted her face in a near identical rendering of Eve in the above-mentioned fresco, as he simply rearranged the central figures of Masaccio’s composition. More on this painting 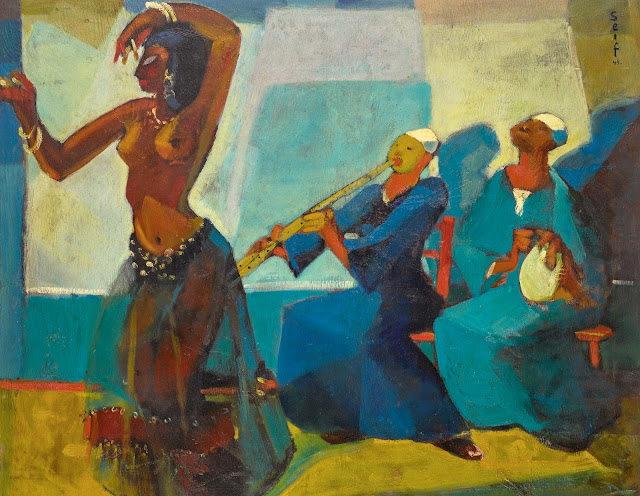 Seif Waly (March 31, 1906 – February 15, 1979) was an Egyptian painter, born Mohammed Seif al-Din Waly into an aristocratic family of Turkish origin in Alexandria, Egypt, who introduced modern art to Egypt after studying at the studio of the Italian artist Otorino Becchi. In 1942 he set up his own studio with his brother Adham Wanly and together they participated in more than 17 exhibitions, notably in the Biennale of Venice and in São Paulo, Brazil. Today an entire floor of the Mahmoud Said Museum in Alexandria is dedicated to Seif and Adham Wanly. More on Seif Waly 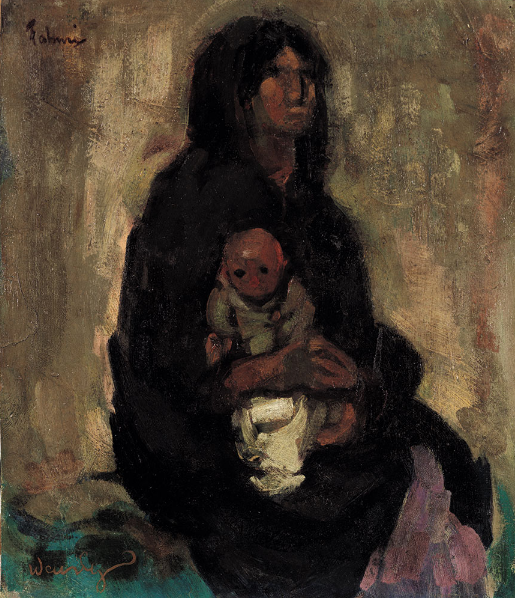 Adham Wanly (1908 in Alexandria, Egypt – 1959) was a painter who learnt in the atelier of the Italian Otorino Becchi 1932, then set up his own atelier with his brother Seif Wanly (above), and participated in many local and international exhibition specially Venice, São Paulo (Brasil), Alexandria Biennale.

The Museum of Modern Art in Alexandria displays many of his paintings. The artist is mostly famous for recording the life of the theater and circus. He specialized in the ballet and opera that is featured in the Cairo Opera House and the Theatre Mohamed Ali in Alexandria. The paintings render the stage lights and movements of the people involved and he is able to express the light and agility in various ways. He had a talent in caricature in which he used in mockery of himself and the people of his time. There is now a museum in his memory. More on Adham Wanly 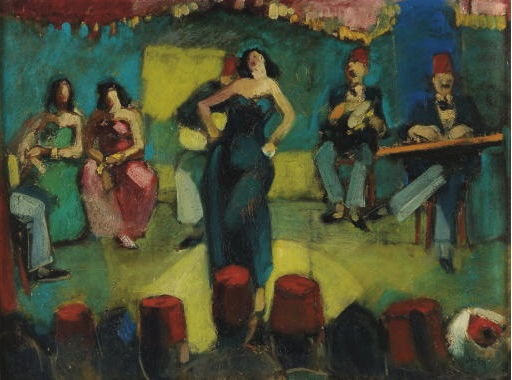 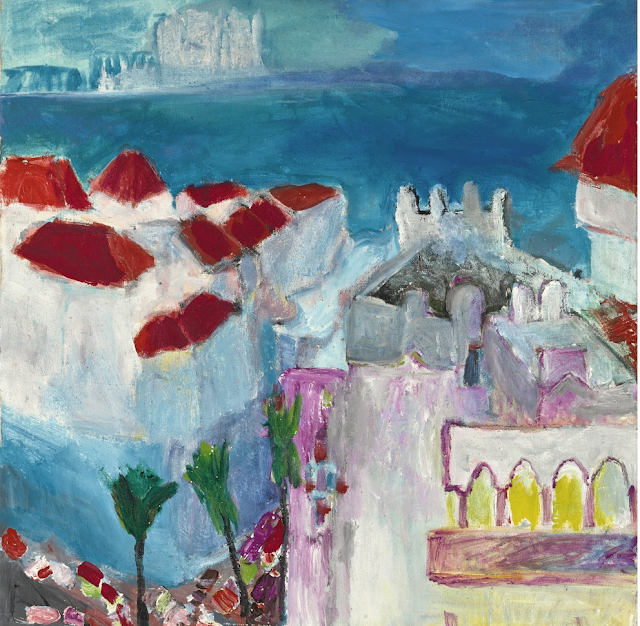 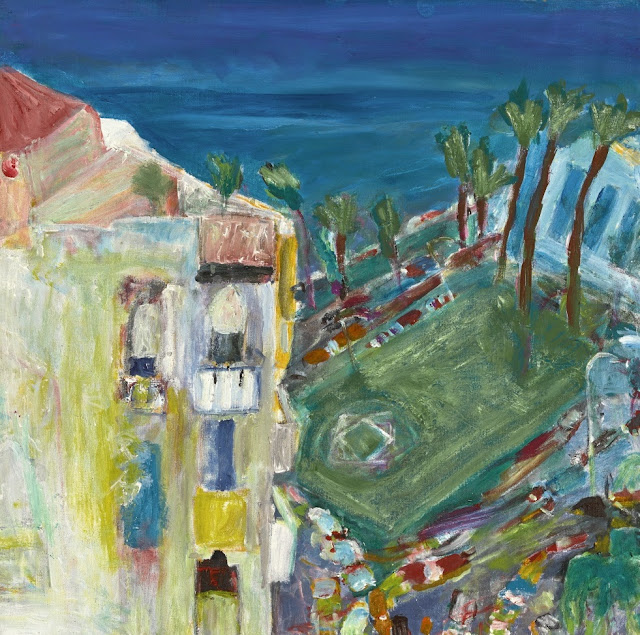 Anna Boghiguian, B. 1947, EGYPTIAN. Born in Cairo, Egypt in 1946, Anna Boghiguian studied art and music at the Concordia University in Montreal and political science and economics at the American University in Cairo. Throughout her travels the artist developed an intimate visual diary, drawing and colouring her surroundings assimilated with text, poetry and sketches. Every image is marked with a different kind of dynamic, often spontaneous. 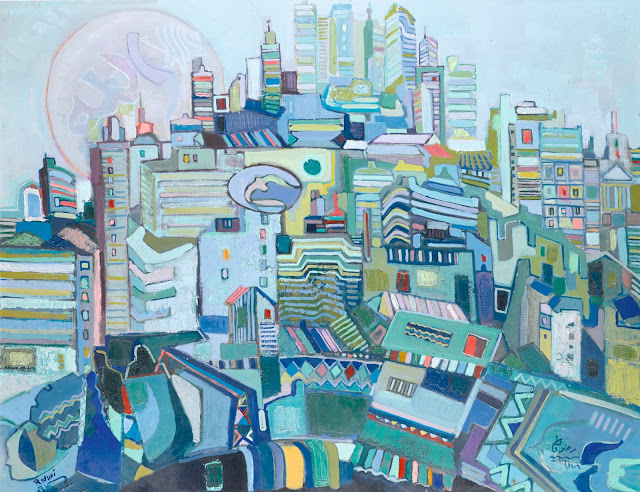 In Untitled, Radwi captures the vibrancy of the city. He depicts a futurist city landscape blending traditional Ottoman architecture with a contemporary one. The strong focus on the architectural façade is highlighted by the various shades of blue. These colourful geometric shapes are a testament to his time spent in Europe and the influence of Cubism. He combined these inspirations with a traditional subject matter to create an image that conveys the magnificence and atmosphere of the old-town Jeddah's unique in style and execution. The treatment of his canvases with the swift and unstructured movements of his palette knife is reminiscent of many of the European modernists. More on this painting 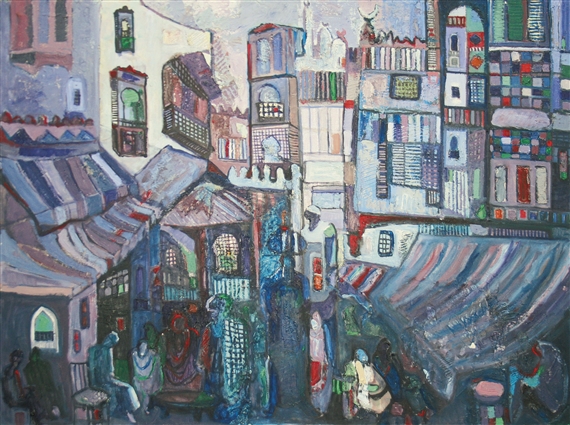 Originally from Makkah, Abdulhalim Radwi (1939-2006) was a painter, poet and sculptor in Jeddah and a pioneer of contemporary arts in Saudi Arabia. He was one of the first Saudis to go abroad for an art education and held a BA degree from the Academy of Fine Arts in Rome (1964).

Radwi started his career as a teacher of fine arts in Makkah but became involved with the arts on a governmental level. From 1968-1974 he was director of the Jeddah Centre for Fine Arts and later (1980-1992) Director-General of the Culture and Arts of the City of Jeddah. In 1973 Radwi spent time in Madrid were he was Action Director of the Association of Arab Artists. In 1979 Radwi graduated from the Royal Arts Academy in Madrid. He was awarded many art prizes and honors while he spent much time abroad organizing as many as 105 exhibitions. His family maintain a website of his work, which can also be seen in museums of modern art in Jordan, Brazil, Morocco, Spain and Tunisia.

Radwi's paintings dealt mostly with Saudi lifestyle and he is said to have believed that Saudi artists must always keep an eye on their national identity. His two personal favorite paintings were The Recitation of Qur’an, which won a prize at the 1988 Biennale in Spain, and Old Buildings in Makkah, which he refused to sell for half a million Saudi riyals and kept in his personal museum in Jeddah. More on Abdulhalim Radwi 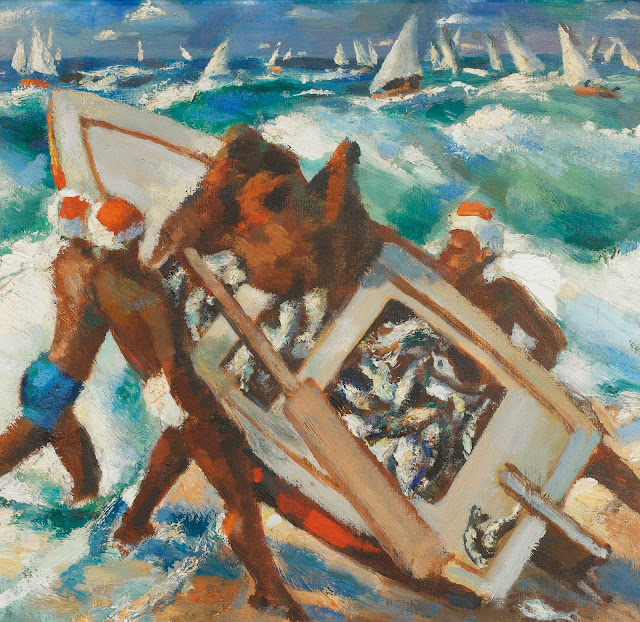 There is no doubt that the city of Alexandria had a resounding effect on the oeuvre of Mahmoud Said. A native of this great city, a number of Said’s paintings revolving around the rough seas and fishermen can be attributed to his hometown.  Undeniably the most prominent example is La Pêche Miraculeuse from 1933, which is currently housed in the Egyptian Embassy in Washington D.C.  Like the ships in the foreground aimlessly wandering the rough seas for the catch of the day, this theme of the search and the catch is also depicted very strongly in the present work Le Retour de Pêche. This stunning painting by Said is emblematic of the Alexandrian fishermen, who to this day can be seen on the eastern harbour of Alexandria, preparing their wooden boats to take on the rough seas. More on this painting 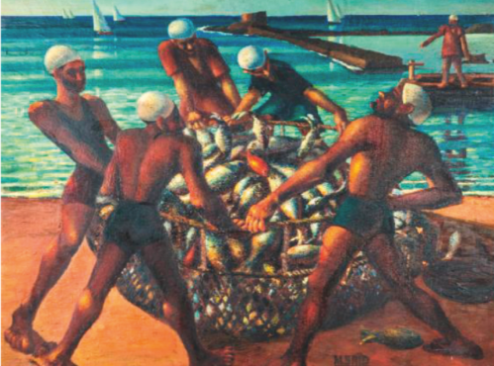 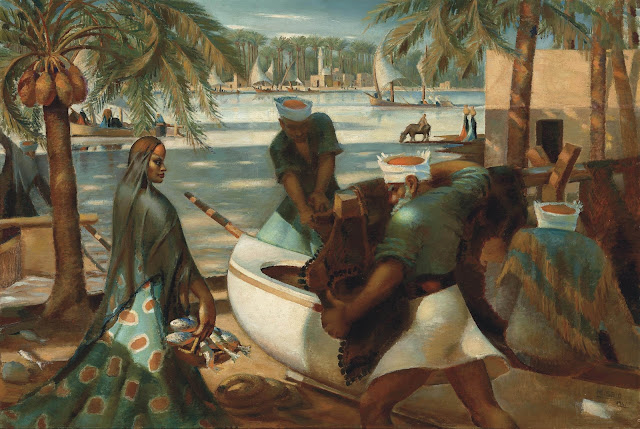 Painted in 1941, Pêcheurs à Rosette is one of the artist's iconic works that is rooted in Egyptian national identity and depicts a detailed Egyptian scene beside the Nile with fishermen unloading their catch. More on this painting

Mahmoud Said, 1897-1964, EGYPTIAN. Born into a wealthy Alexandrian family, Mahmoud Said first studied jurisprudence at the French School of Law in Cairo in the 1910s. During his studies, he became interested in painting, and joined the studios of Italian painters Amelia Casonato da Forno and Arturo Zanieri, before travelling to France to study in Paris, briefly at the Académie Julian. Though he worked for almost thirty years as a lawyer and then a judge, he continued to paint in his free time until he quit law in the late 1940s and devoted himself to art completely. He is considered the foremost painter of the ‘Pioneer’ generation of Egyptian artists, renowned for his bold, richly coloured portraits, nudes, and landscapes. He painted continuously until his death in 1964. 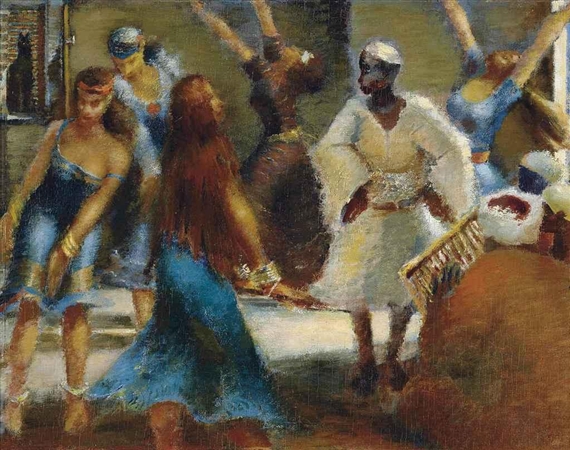 El-Zar is a rediscovered preparatory oil painting for a larger well-known composition from the collections of the Museum of Modern Art of Cairo. The painting presents a group of people dancing and playing music as part of a religious ritual. More on this painting 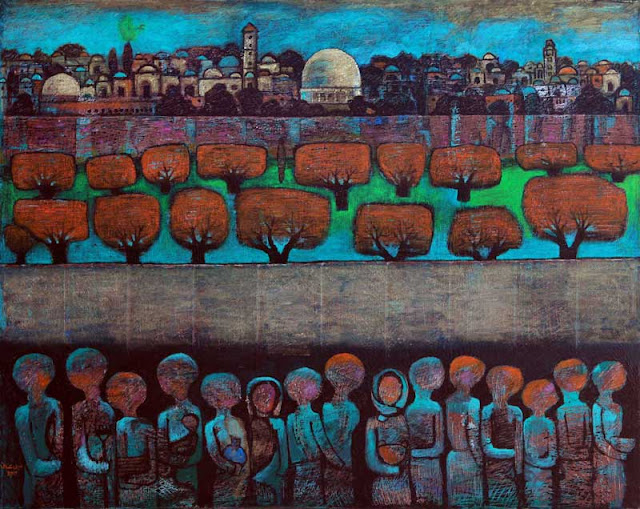 Nabil Anani studied fine art at the Fine Arts College in Alexandria and Islamic Archaeology at Al-Quds University, Jerusalem. He has held solo exhibitions in Jerusalem, Ramallah, Gaza City, Cairo and London. He has participated in numerous group exhibitions including the Palestinian Art Festival, Moscow (1986), It’s Possible, National Museum, Washington, DC (1995), Artists of the Occupied Lands, Jordan National Gallery of Fine Arts, Amman (1999), and The Colors of Life and Freedom, UNESCO, Paris (2004). His awards include the State of Palestine Award in Fine Arts (1997), and The King Abdullah of Jordan Award in Fine Arts for the Middle East (shared with Egyptian artist George Bahjuri, 2006).

Anani’s work focuses on the symbolism of the olive tree, a major component of Palestine’s landscape. For him, the destruction of the olive tree by Israeli forces parallels the plight of the people living under the occupation. More on Nabil Anani