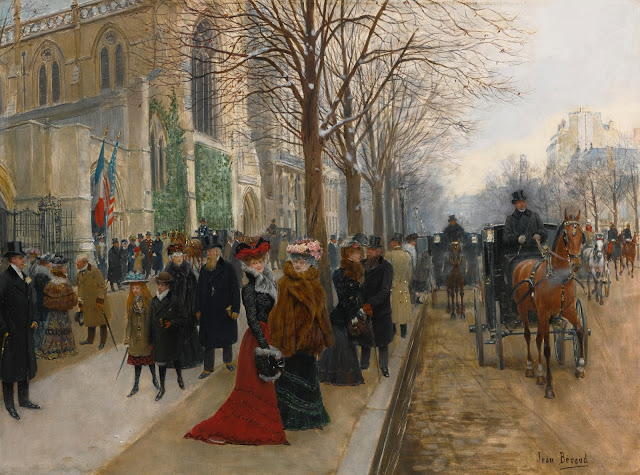 Jean Beraud's  After the service at the Church of the Holy Trinity, Christmas 1890 depicts elegant parishioners leaving the Church of the Holy Trinity, now Known As The American Cathedral in Paris, on Christmas day. Men Sport Their thin coats and top hats, children are smartly dressed and women are adorned in furs and lace veils Elaborate chapeaus with, Their long dresses in hues of green and red. The parishioners' fashions and the carriages and drivers are punctuated with brilliant strokes of color, all serving to draw the viewer's eye to the two flags hanging over the church's entrance, sister ensigns That act as a clear and poignant symbol of Franco-American friendship. More

Jean Béraud (French: January 12, 1848 – October 4, 1935) was a French painter renowned for his numerous paintings depicting the life of Paris, and the nightlife of Paris society. Pictures of the Champs Elysees, cafés, Montmartre and the banks of the Seine are precisely detailed illustrations of everyday Parisian life during the "Belle Époque". He also painted religious subjects in a contemporary setting. More 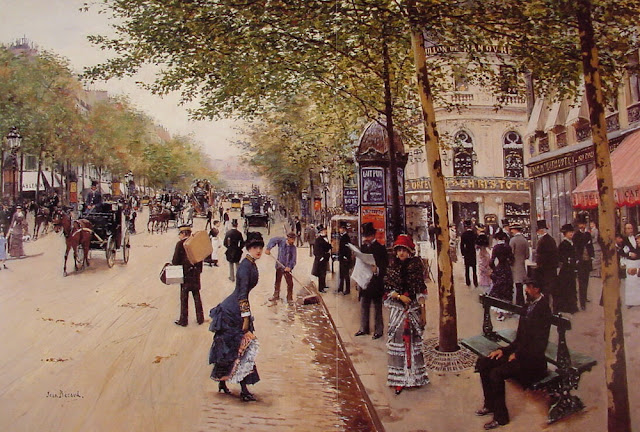 The name comes from a beautiful convent of Capuchin nuns whose garden was on the south side of the boulevard prior to the French Revolution.

The former name, Rue Basse-du-Rempart ("bottom-of-the-wall street" in French), suggests that, in the beginning, the street paralleled the city wall of Paris. Then, when the wall was destroyed, the street was widened and became a boulevard. More 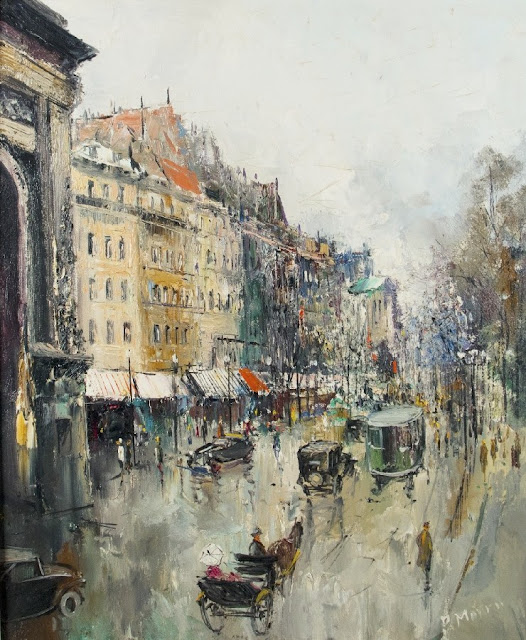 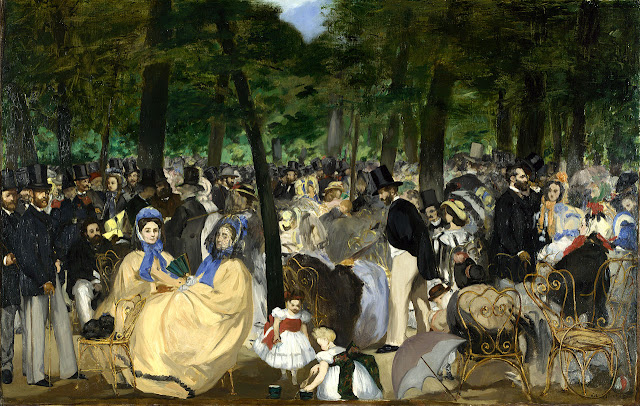 Music in the Tuileries is jointly owned by the National Gallery, London and the The Hugh Lane, Dublin.

The work is an early example of Manet's painterly style, inspired by Frans Hals and Diego Velázquez, and it is a harbinger of his lifelong interest in the subject of leisure. The painting influenced Manet's contemporaries – such as Monet, Renoir and Bazille – to paint similar large groups of people. More

Édouard Manet (23 January 1832 – 30 April 1883) was a French painter. He was one of the first 19th-century artists to paint modern life, and a pivotal figure in the transition from Realism to Impressionism.

His early masterworks, The Luncheon on the Grass (Le déjeuner sur l'herbe) and Olympia, both 1863, caused great controversy and served as rallying points for the young painters who would create Impressionism. Today, these are considered watershed paintings that mark the genesis of modern art. More 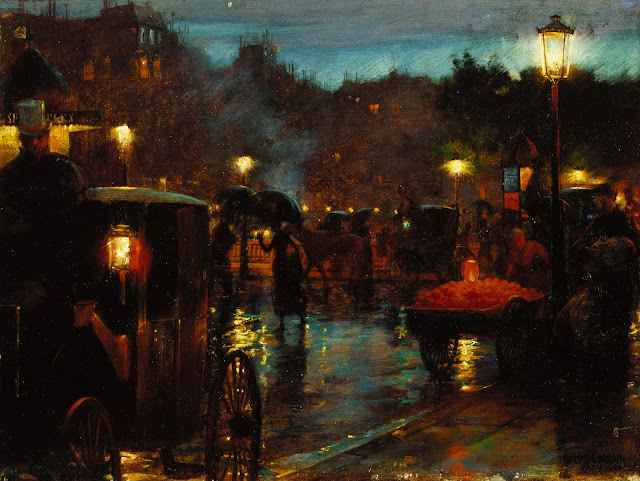 Charles Courtney Curran (1861–1942) was an American painter. He is best known for his canvases depicting women in various settings. Curran was born in Hartford, Kentucky. A few months later after the beginning of the Civil War, the family left there and returned to Ohio, eventually settling in Sandusky on the shores of Lake Erie.

Charles Curran showed an early interest and aptitude for art, and in 1881 went to Cincinnati to study at the McMicken School. He stayed there only a year before going to New York to study at the National Academy of Design and the Art Students League. Many of the pictures he created during this period featured young attractive working class women engaged in a variety of tasks.

One was particularly noteworthy: Breezy Day (1887, collection of Pennsylvania Academy of the Fine Arts) and won the Third Hallgarten Prize for Oils from the NAD in 1888. Shortly thereafter Curran and his young bride Grace left the United States to study in Paris, the center of the art world.

After two and half years abroad, the young family returned to the United States in June, 1891. For the next ten years Curran divided his time between New York where the couple had an apartment and Curran maintained a studio, and Ohio where they had extended family and spent most summers. He died in New York City in 1942. More 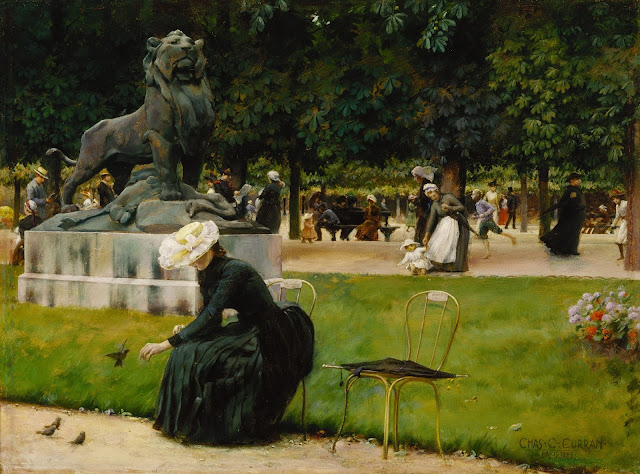 The Jardin du Luxembourg, or the Luxembourg Garden, located in the 6th arrondissement of Paris, was created beginning in 1612 by Marie de' Medici, the widow of King Henry IV of France, for a new residence she constructed, the Luxembourg Palace. The garden today is owned by the French Senate, which meets in the Palace. It covers 23 hectares and is known for its lawns, tree-lined promenades, flowerbeds, the model sailboats on its circular basin, and for the picturesque Medici Fountain, built in 1620. More 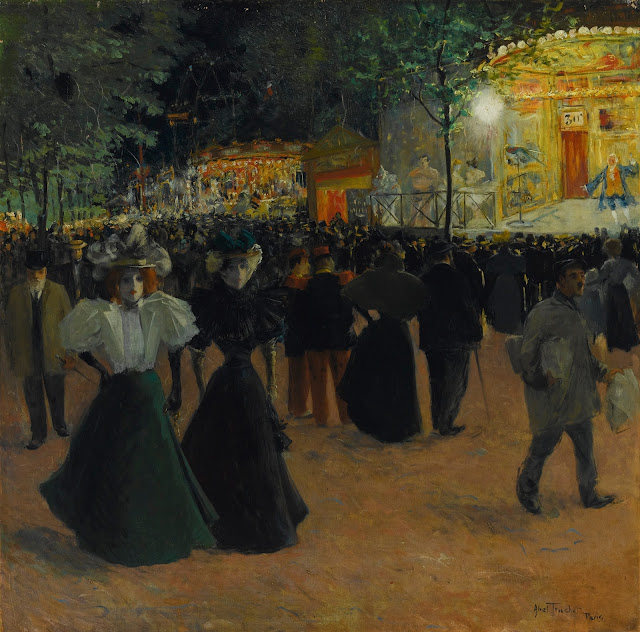 By the end of the nineteenth century, Paris witnessed a dramatic proliferation of concert halls, cabarets, cinemas, circuses and cafes, many of which were chronicled by artists such as Jean Béraud, Edgar Degas, Pablo Picasso, Henri Toulouse-Lautrec, and Georges Seurat.  Perhaps the most exhilarating entertainment for both the public and artists, however, was that of the fête forain, a large fair bustling with attractions, games and saltimbanques, or itinerant entertainers such as tight-rope walkers, acrobats, and unusual curiosities who traveled in covered wagons and performed spectacles along Parisian avenues.

Here, Abel-Truchet portrays an evening at la fête forain in the Place Pigalle.  His use of bold colors and contours as well as his spontaneous brushwork captures the energy and excitement of the scene, and is a testament to the influence of Impressionism on his body of work. More

The Place Pigalle is a public square located in the 9th arrondissement of Paris, between the Boulevard de Clichy and the Boulevard de Rochechouart, near Sacré-Cœur, at the foot of the Montmartre hill. The place takes its name from the sculptor, Jean-Baptiste Pigalle (1714–1785), and it is the best-known district of the Quartier Pigalle, the Pigalle district.

The square and the surrounding streets were, at the end of the 19th century, a neighbourhood of painters' studios and literary cafés of which the most renowned was the Nouvelle Athènes. More

Louis Abel-Truchet, 1857 - 1918,  was an important French painter, etcher and lithographer in his lifetime. He was born in 1857 in Versailles. He is predominantly known for his paintings depicting Paris at the turn of the century, with cafés, theatres, shops, everyday life and fashionable Parisians forming an essential part of the subject matter.

He exhibited from 1891 in various salons and was a founding member of the Salon d'Automne and the Societe des Humoristes. He also exhibited at the Salon des Artistes Français and the Société Nationale des Beaux-Arts, becoming a member in 1910.
Though influenced by impressionism, Abel-Truchet is also satirical at times and his work focused on the Belle Epoque, linking him with artists such as Galien-Laloue, Forain and Steinlen.

In 1914, aged fifty seven, he volunteered to fight in the World War One. He was to produce a series of lithographs depicting scenes from his experiences. He commanded a section of fighting troops during the war and was awarded the Legion of Honour and La Croix de Guerre. Abel-Truchet died in service in the last few months of the war. More 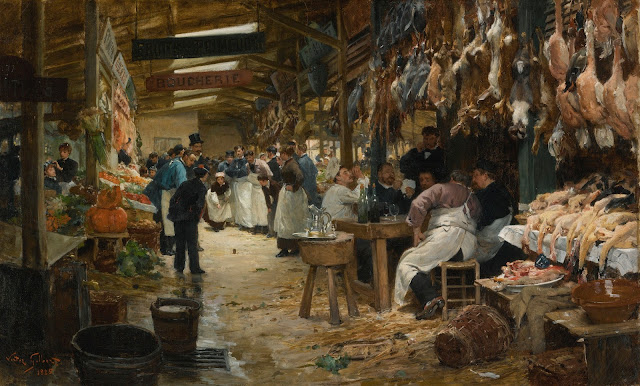 The energy surrounding the exchange of fresh fruits, vegetables, meats and flowers at the various place des marchés in the bustling city of Paris enamored Victor Gilbert and prompted the works for which he is most celebrated. The enormous meat and produce market in north-central Paris, Les Halles, was a frequent subject for Gilbert, and it also served as the backdrop for Emile Zola’s Le ventre de Paris (1873).

In this work, a light beaming through skylights brightens a corner of the small indoor market, illuminating the various wares.  With a meticulous attention to detail, he renders every detail from a glass pitcher, to straw baskets, to the poultry and game in the stalls, and even to the customer’s hat being finely fashioned with blooms from the flower stand. More

Victor Gabriel Gilbert born in Paris the 13 February 1847 and died in the 21 July 1933. He was a French painter. He is buried in Montmartre cemetery in Paris. In 1860 he apprenticed to a painter and decorator. He followed with evening art classes under the direction of Father Levasseur, the School of the City of Paris. In the late 1870s, his taste for naturalism is developed and he turned to genre painting with scenes of streets, cafes, markets, especially that of Halles . He obtained a second class medal at the Salon of 1880 and a silver medal at the 1889 World Fair . It becomes a member of the French Society of Artists in 1914.

Victor Gilbert was appointed Knight of the Legion of Honour in 1897, and received the Prix Léon Bonnat in 1926. More 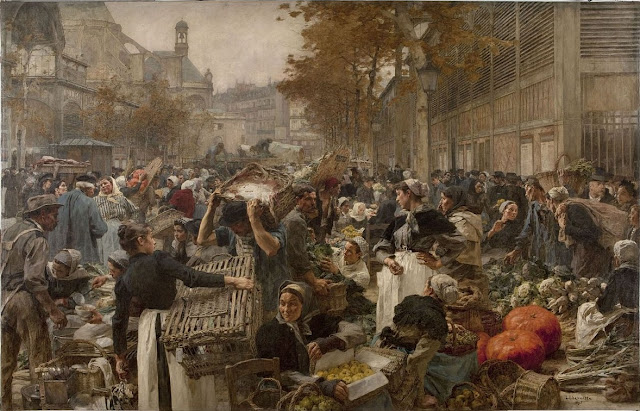 Painting of the main market of Paris in the late 19th century. Painting ordered in 1889 for the City Hall of Paris.

Léon Augustin Lhermitte (31 July 1844, Mont-Saint-Père – 28 July 1925, Paris) was a French realist painter and etcher whose primary subject matter was rural scenes depicting peasants at work. He was a student of Lecoq de Boisbaudran, he gained recognition after his show in the Paris Salon in 1864.

His many awards include the French Legion of Honour (1884) and the Grand Prize at the Exposition Universelle in 1889.

Lhermitte’s innovative use of pastels won him the admiration of his contemporaries. Vincent van Gogh wrote that "If every month Le Monde Illustré published one of his compositions ... it would be a great pleasure for me to be able to follow it. It is certain that for years I have not seen anything as beautiful as this scene by Lhermitte ... I am too preoccupied by Lhermitte this evening to be able to talk of other things."

Lhermitte is represented in the collections of museums around the world, including Amsterdam, Boston, Brussels, Chicago, Florence, Montreal, Moscow, Paris, Rheims, and Washington. More 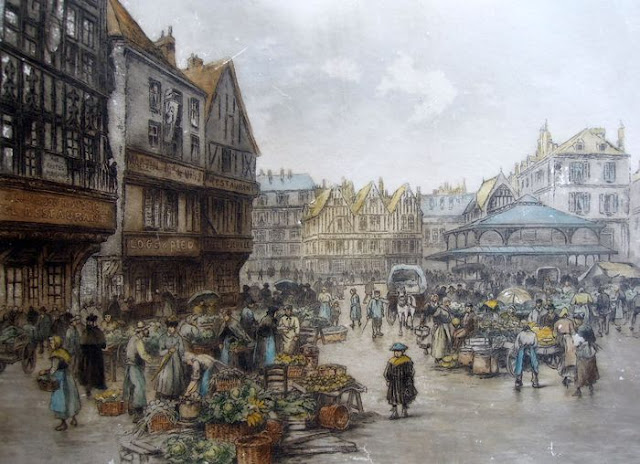 Gustave Fraipont, born in Brussels the 9 May 1849 and died in Paris on 29 April 1923 , is a Belgian painter , sculptor , illustrator and poster artist.
Summary

Belgian by birth, he became naturalized French. Professor of drawing at the Maison d'éducation de la Légion d'honneur , he is the author of numerous books on the art of drawing. In 1885, he provided illustrations for the series The Littoral of France for the publisher Victor Palme . He also illustrated books on Paris and the French regions.
He publishes books for young people such as Andre the miller and the sailor Yves. He also illustrated the Letters of my mill , the Tales of Perrault , Robinson Crusoe , Câline of zénaïde fleuriot .

He created numerous posters for railway companies, including Western Railway and the North , as well as official documents and paper securities . His poster Pierrefonds, North company was reproduced in the magazine The masters of the poster (1895-1900).

He contributed to many newspapers and magazines, such as the French Courrier and Paris shown. In 1905, he was appointed as a Naval painter .

During the First World War , he made several compositions for the newspaper L'Illustration , including the monuments destroyed by the war: Halls Ypres , Reims Cathedral and Arras City Hall .

Gustave Fraipont is the father of Georges Fraipont (1873-1912), also an illustrator of books, but especially known for his paintings. More 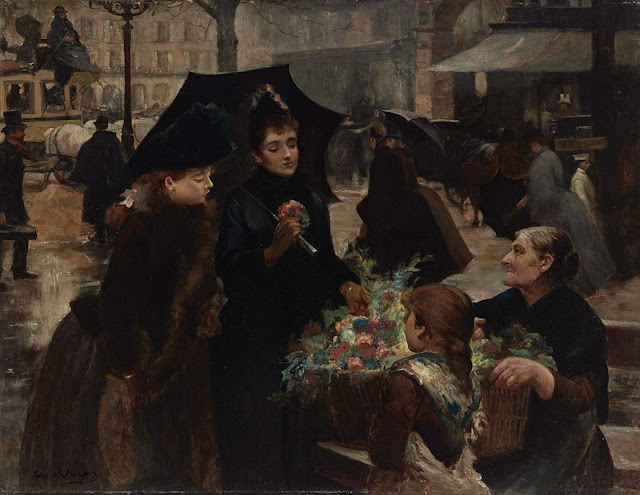 Louis Marie de Schryver, 1862 - 1942, Born in Paris in 1862, Louis Marie de Schryver began his artistic career under the tutelage of the portrait painter and orientalist Gabriel-Joseph-Marie-Augustin Ferrier. He exhibited for the first time at the Paris Salon at the young age of 13, showing two works, both still life canvases of flowers.

The choice of subject would permeate throughout the entirety of his long career. He earned numerous awards from 1879 onwards, including a number of honorable mentions at the Salon, as well as the Universal Expositions of 1891, 1896 and 1900. Highly praised by both critics and the public alike, de Schryver enjoyed enormous success during his lifetime, and his works remain highly sought after. More 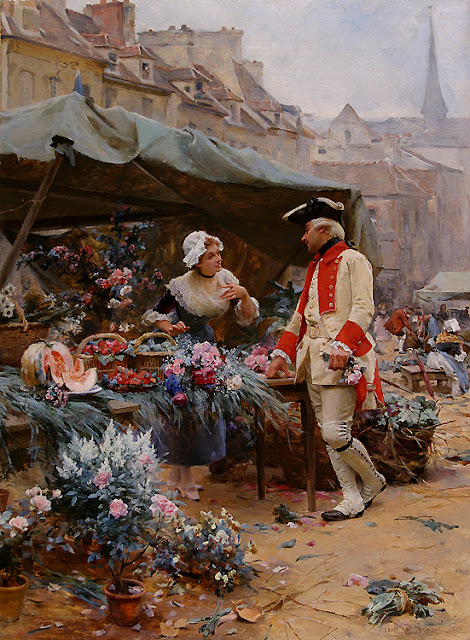