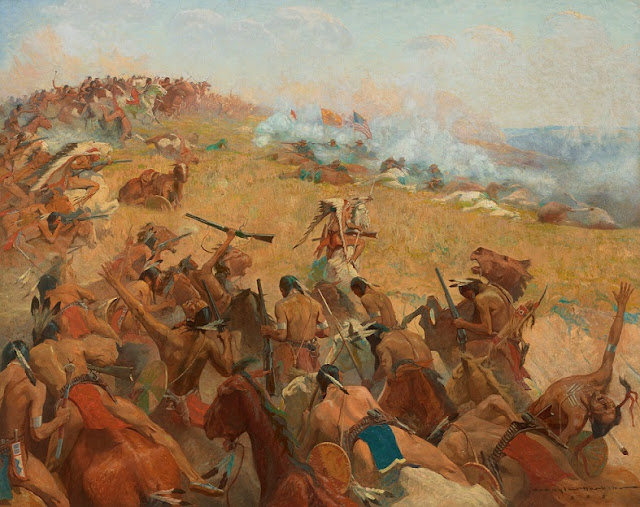 Gayle Porter Hoskins (1887-1962)
The Battle of Little Bighorn, c. 1928
Oil on canvas
48 x 60 in. (121.9 x 152.4 cm.)
Private collection
The most significant battle of the Great Sioux War of 1876, The Battle of Little Bighorn involved the combined forces of the Lakota, Northern Cheyenne and Arapaho tribes versus the 7th Cavalry Regiment of the United States Army. Commonly known as Custer's Last Stand, the conflict resulted in a devastating loss for the United States and the death of the former Civil War general Lieutenant Colonel George Armstrong Custer. More on this painting
Gayle Porter Hoskins (July 20, 1887 – January 14, 1962) was an American illustrator. Hoskins began his training at the Chicago Art Institute and later studied under Howard Pyle in Wilmington, Delaware.

He was born in Brazil, Indiana to William "Pica" Thompson Hoskins, a sheet-music dealer, and Madge Porter Hoskins in 1887. The family moved to Denver, Colorado five years later. About 1901, he began publishing cartoons in the Denver Post. Three years later his mother died and the family moved back east to Chicago. Hoskins then studied at the School of the Art Institute of Chicago and studied under Charles Francis Browne, Frank Phoenix, Thomas Wood Stevens, and John Vanderpoel. He began working for Marshall Field and Company as a mural designer and published illustrations in Redbook in 1907.

Howard Pyle invited Hoskins to study at Pyle's school in Wilmington in 1907. Hoskins studied there until 1910 under Pyle and later under Frank Schoonover. He became a nationally known illustrator by 1918 publishing in Harper's Weekly, Good Housekeeping, Liberty, Saturday Evening Post, Cosmopolitan, and other magazines.

For financial reasons he began working for pulp magazines after the Crash of 1929. His illustrations appeared on the covers of Western Story, Complete Stories, Top-Notch, Sure-Fire Western, Super Western, and Western Trails. After 1938 he stopped publishing in the pulps, preferring portraits and historical subjects instead. More on Gayle Porter Hoskins