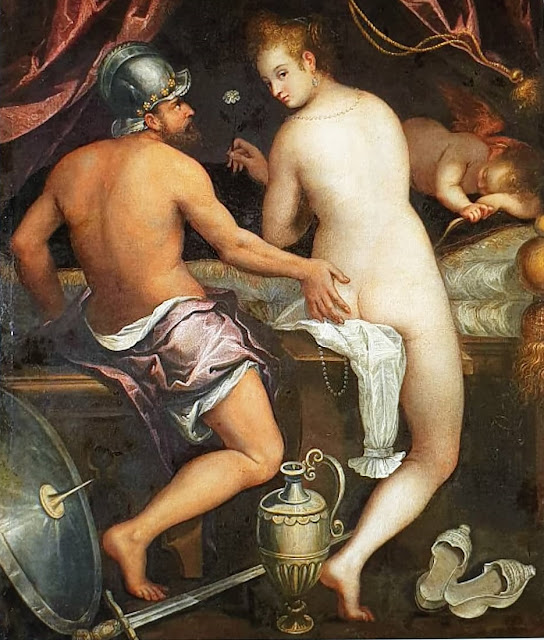 In a bedroom a man and a young woman pose as Mars and Venus. She is completely naked and looks back: she stares at us and hands us a narcissus flower. He has only his helmet on his head and a drape covers his private parts: he looks at her and, almost frightened, puts his hand on her bottom. More on this painting

The Roman myth of Venus and Mars is of Venus, the Goddess of Love having a passionate affair with Mars, the God of War.

Lavinia Fontana (August 24, 1552 – August 11, 1614) was a Bolognese Mannerist painter best known for her portraiture. She was trained by her father Prospero Fontana and was active in Bologna and Rome. She is regarded as the first female career artist in Western Europe as she relied on commissions for her income. Her family relied on her career as a painter, and her husband served as her agent and raised their eleven children. She was perhaps the first woman artist to paint female nudes.

Fontana and her family moved to Rome in 1603 at the invitation of Pope Clement VIII. She gained the patronage of the Buoncompagni, of which Pope Gregory XIII was a member. She was subsequently appointed as Portraitist in Ordinary at the Vatican. Lavinia thrived in Rome as she had in Bologna and Pope Paul V himself was among her sitters. She was the recipient of numerous honors.

She was elected into the Accademia di San Luca of Rome. She died in the city on August 11, 1614 and was subsequently buried at Santa Maria sopra Minerva. More on Lavinia Fontana