02 Paintings by the Orientalist Artists in the Nineteenth-Century, with footnotes, 32 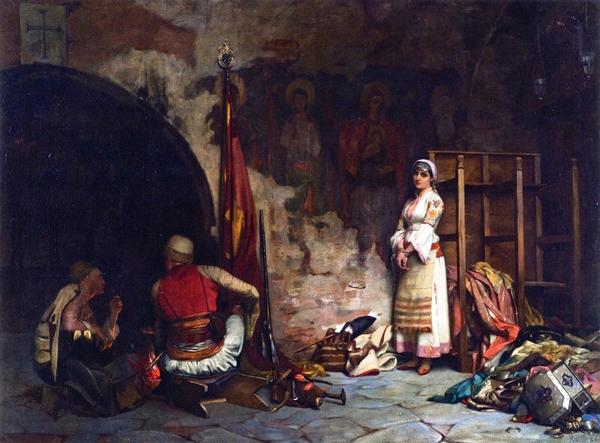 Rallis painted this less than ten years after a Bulgarian uprising against the Turkish Ottoman Empire. The Turks' bashi-bazouk irregular soldiers were accused of many massacres and other atrocities, including seizing Bulgarian girls to be sold into harems. In this painting a young woman stands with her hands bound next to a pile of stolen valuables in a ruined Orthodox Christian church. Rallis painted a similar painting, Booty, about twenty years later (below). 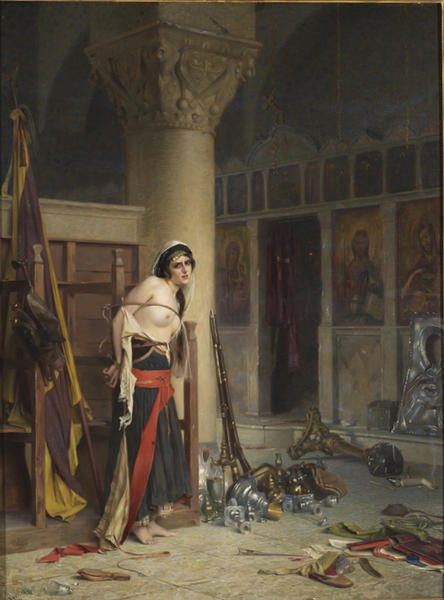 Théodore Jacques Ralli or Theodorus Rallis (Constantinople, 16 February 1852 – 2 October 1909, Lausanne) was a Greek painter, watercolourist and draughtsman, who spent most of his working life in France and Egypt.


He painted genre works, portraits, local figures, architectural subjects, interiors with figures and animals. But he is best known for his orientalist paintings.

He was sent to Paris under the patronage of King Otto of Greece and studied under Jean-Léon Gérôme, and under Jean-Jules-Antoine Lecomte du Nouy, both known for their orientalist paintings.


Rallis first exhibition was at the Salon in 1875. From 1879 he regularly exhibited at the Royal Academy in London. He was a member of the Société des Artistes Français, where he received an honourable mention in 1885, and a silver medal in 1889 for his whole work He exhibited his paintings in the Salon de Rouen (1897, 1903, 1906 and 1909) and also in Athens during the Olympic Games of 1896. He also served as a member of the competition jury in 1900 at the Exposition Universelle.In 1901 he became a Chevalier of the Légion d’Honneur. More on Theodoros Rallis