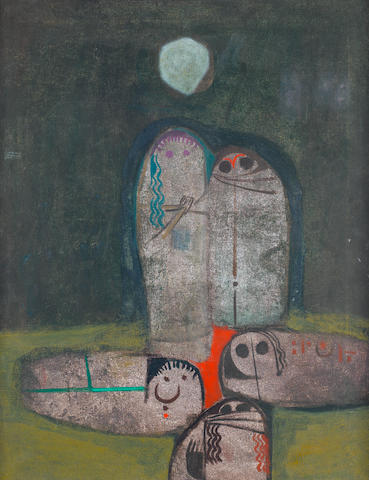 The Marsh Arabs, also known as the Maʻdān (Arabic: معدان‎), are inhabitants of the Tigris-Euphrates marshlands in the south and east of Iraq and along the Iranian border. Comprising members of many different tribes and tribal confederations that had developed a unique culture centered on the marshes' natural resources. Many of the marshes' inhabitants were displaced when the wetlands were drained during and after the 1991 uprisings in Iraq.

Madan means "dweller in the plains (ʻadan)" and was used disparagingly by desert tribes to refer to those inhabiting the Iraqi river basins. There was a considerable historic prejudice against the Maʻdān, partly as they were considered to have Persian or Indian origin by the sunni Iraqi people, even though there are %100 Arabs, and mostly because of they refused to bow to the sunni dictatorship. More

Born in Baghdad in 1939, Dia Azzawi started his artistic career in 1964, after graduating from the Institute of Fine Arts in Baghdad and completing a degree in archaeology from Baghdad University in 1962.

From 1968 to 1976, Azzawi was the director of the Iraqi Antiquities Department in Baghdad. He has lived in London since 1976, where he served as art advisor to the city’s Iraqi Cultural Centre, from 1977 to 1980. Azzawi’s move to London led him to rediscover book art (dafatir), an art form that he has encouraged other artists from Iraq and the region to explore.