01 Painting, Streets of Paris, by the artists of the time, Part 33 - With Footnotes 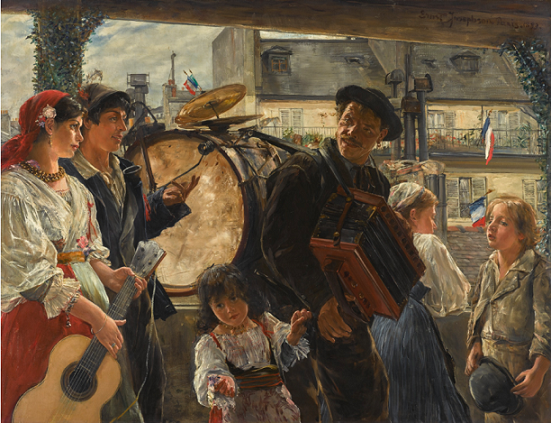 Bastille Day is the common name given in English-speaking countries/lands to the French National Day, which is celebrated on the 14th of July each year. In France, it is formally called la Fête nationale and commonly and legally le 14 Juillet.


The French National Day commemorates the first anniversary of Storming of the Bastille on 14 July 1789, a turning point of the French Revolution, as well as the Fête de la Fédération which celebrated the unity of the French people on 14 July 1790. Celebrations are held throughout France. The oldest and largest regular military parade in Europe is held on the morning of 14 July, on the Champs-Élysées in Paris in front of the President of the Republic, along with other French officials and foreign guests. More on Bastille Day

Ernst Josephson (16 April 1851, Stockholm, Sweden – 22 November 1906) was a Swedish painter whose main work was done on portraits and paintings of folk life.

He did his art studies in Italy, France and the Netherlands, among others, and is reputed to have said at the age of 20: "I will become Sweden's Rembrandt or die."

However, his life was marred by illness. He contracted syphilis at a relatively young age, and in 1888 he became mentally ill during a visit to Brittany, having religious hallucinations and believing that he was God and Christ.

He was later taken to hospital in Uppsala and diagnosed with schizophrenia, but continued working throughout his disease, often while in a trance-like state.

He also wrote poetry, in the collections Svarta rosor (1888, Black Roses) and Gula rosor (1896, Yellow Roses). His main work, Näcken (1884, the Nix), was refused by the Swedish National Museum in Stockholm – however, Prince Eugén, Duke of Närke, bought the painting in fury over the decision.

Josephson's painting "Strömkarlen" shows the strong influence he has had on the current crop of Scandinavian figurative painters, most notably the Norwegian Odd Nerdrum. More on Ernst Josephson