01 Painting by the Orientalist Artists of the Nineteenth-Century, with footnotes, 35 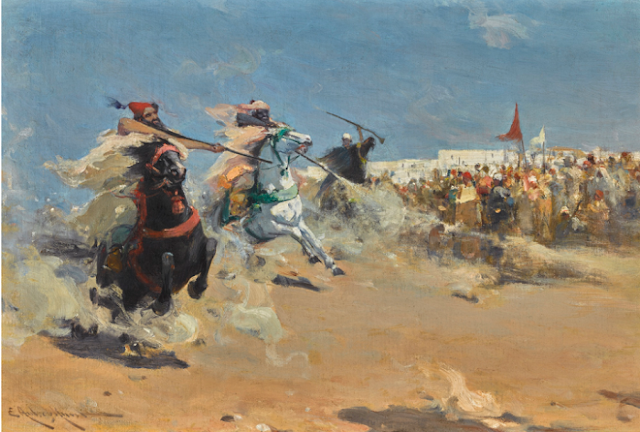 Fantasia is a traditional exhibition of horsemanship in the Maghreb performed during cultural festivals and to close Maghrebi wedding celebrations. "Fantasia" is an imported name, the actual traditional term used is lab el baroud.

The performance consists of a group of horse riders, all wearing traditional clothes, who charge along a straight path at the same speed so as to form a line, and then at the end of the charge (about two hundred meters) fire into the sky using old muskets or muzzle-loading rifles The difficulty of the performance is in synchronizing the movement of the horses during acceleration of the charge, and especially in firing the guns simultaneously so that one single shot is heard. The horse is referred to as a fantasia horse and are of Arabian, Andalusian or Barb stock. More on Fantasia

JW greatly admired Hunt's work. In 1881 he wrote to Charles Deschamps: 'Now about Aubrey Hunt - I want Sir Coutts very much to see his picture - I am sure that it will be charming and really most important in the Grosvenor - His work is most brilliant and full of delightful quality - far more artistically rare than all the Ellis and Easts and Wyllies... put together'. Hunt was amongst those invited to a dinner organised by W. C. Symons to congratulate JW on becoming an Honorary Member of the Royal Academy of Munich, a dinner which was to be held at the Criterion in Piccadilly on 1 May 1889. More on Edmund Aubrey Hunt