01 Painting, Streets of Paris, by the artists of the time, Part 32 - With Footnotes 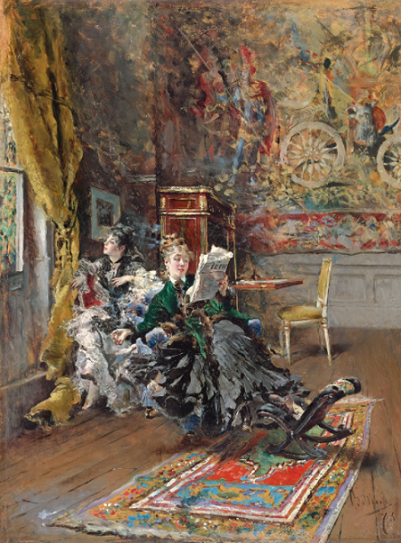 Les Parisiennes epitomises Boldini's compositions of the salons of Empire-period homes, providing a glimpse into the leisured lives of their elegantly costumed occupants.


Here two beautiful, fashionable young ladies are shown passing a quiet afternoon in a Louis XVI-decorated study. A Flemish Classical Triumph tapestry, from Brussels of Bruges of the 16th Century, forms the backdrop to the composition, while an Anatolian single-niche prayer rug of lustrous colour is laid out on the floor. The brunette is distracted by events unfolding outside the window, while the blonde model, Berthe – Boldini's lover and muse – reads quietly. Adding to the period décor are the open secrétaire à abattant and desk chair, as well as the Gobelins woven tapestry adorning the walls. Berthe reads Le Figaro and holds a lit cigarette, her casual, relaxed position denoting an air of confidence. Le Figaro, France's oldest newspaper, was founded in 1826 as a satirical weekly and took its name and motto from The Marriage of Figaro. More on this painting

Giovanni Boldini (31 December 1842 in Ferrara, Italy – 11 July 1931 in Paris, France) was an Italian genre and portrait painter. According to a 1933 article in Time magazine, he was known as the "Master of Swish" because of his flowing style of painting. Boldini was born in Ferrara, the son of a painter of religious subjects, and in 1862 went to Florence for six years to study and pursue painting. He only infrequently attended classes at the Academy of Fine Arts, but in Florence, met other realist painters known as the Macchiaioli, who were Italian precursors to Impressionism.

Moving to London, Boldini attained success as a portraitist. He completed portraits of premier members of society. From 1872 he lived in Paris, where he became a friend of Edgar Degas. He also became the most fashionable portrait painter in Paris in the late 19th century. He was nominated commissioner of the Italian section of the Paris Exposition in 1889, and received the Légion d'honneur for this appointment.

A Boldini portrait of his former muse Marthe de Florian, a French actress, was discovered in a Paris flat in late 2010, hidden away from view on the premises that were unvisited for 70 years. The portrait has never been listed, exhibited or published and the flat belonged to de Florian's granddaughter who went to live in the South of France at the outbreak of the Second World War and never returned. A love-note and a biographical reference to the work painted in 1888, when the actress was 24, cemented its authenticity. The full length portrait of the lady in the same clothing and accessories, but less provocative, hangs in the New Orleans Museum of Art. More on Giovanni Boldini